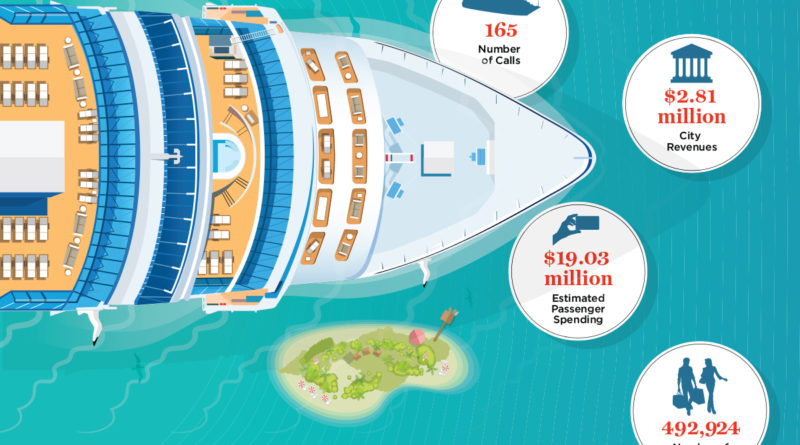 The city and community have been discussing cruise ships since Oct. 2019; it has ultimately come down to the economic benefit the vessels have on the island.

Those guidelines set a limit of three cruise ships per week during both the summer and off seasons and prohibit cruise ships from visiting on the weekends during the summer season or during special event weekends — such as JazzTrax – unless written approval is give by the city manager.

The resolution also stated the harbor master and finance director would provide an annual report on cruise ships including the number of vessels that visit Avalon, number of passengers, amount of wharfage collected, any safety or security incidents that may have occurred while the ship was in port and projections and scheduling information for the next year.

City Manager and City Clerk Denise Radde prepared the resolution and presented it to the City Council at the Jan. 21 meeting.

“I do not take this decision lightly,” Radde said before detailing the recommendations. “It’s weighed very heavy on me for a couple weeks now.”

RCCL, on Jan. 8, revised their request, expanding the approved 53 summer-only visits to a total of 165 visits to Avalon (from July 2021 through August 2024). According to the staff report presented at the Jan. 21 meeting, the city plans to approve the request.

When it came time for council members to make a decision, it ultimately came down to the economic impact.

“I’m thinking anything we can do to ensure there’s good quality work for all of our workforce is a good thing,” City Council member Oley Olson said ahead of the vote.

Many small business owners have spoken at the various meetings in support for cruise ships, saying they rely on the visitors to keep the doors open and supply adequate hours for their employees.

During the same discussions, some argued the city should place tighter restrictions on the number of visiting cruise ships, questioning the ability of island’s infrastructure to support the visitors.

The Jan. 21 staff report presented some data on some of those concerns.

“When analyzing the data, even during the peak of the tourist season, the WV”IFP [wastewater treatment plant] averaged below 60 percent capacity for 2019 and 65 percent capacity for 2018. Further analysis shows that during the tourist season, Fridays, Saturdays, and Sundays (when cruise ships are not present in the Avalon Harbor), are at relatively the same capacity as Mondays and Tuesdays,” the staff report stated.

According to the staff report, data received from the city’s landfill contractor indicated impacts to the Pebbly Beach Landfill as a result of cruise ship tourists were negligible. However, the report noted data available was inconclusive as currently there is no way to single-out trash from cruise ship visitors. The staff report said impacts on water infrastructure were also inconclusive, due to the lack of data showing how potable water demand is met.

“It’s hard to determine that our cruise ship people are contributing more than say our weekend visitors or anybody else who comes to the island,” Radde said at the City Council meeting.

At the Jan. 21 meeting, the public again gave comment, with community members on both sides of the issue speaking.

“I believe you need more factual and detailed data and thorough investigation and understanding of these impacts,” said Leslie Warner in a letter read by another community member at the meeting.

“I think one of the things we could do that might make the situation a little better, is spend a little effort on how to manage these visitors better rather than trying to exclude them,” said another community member.

Two issues not settled at the Jan. 21 meeting were whether to remove the marketing incentive for cruise ships to come to Avalon and whether to increase the wharfage rates. Radde said city staff will bring those topics back for a discussion before the City Council in the near future.