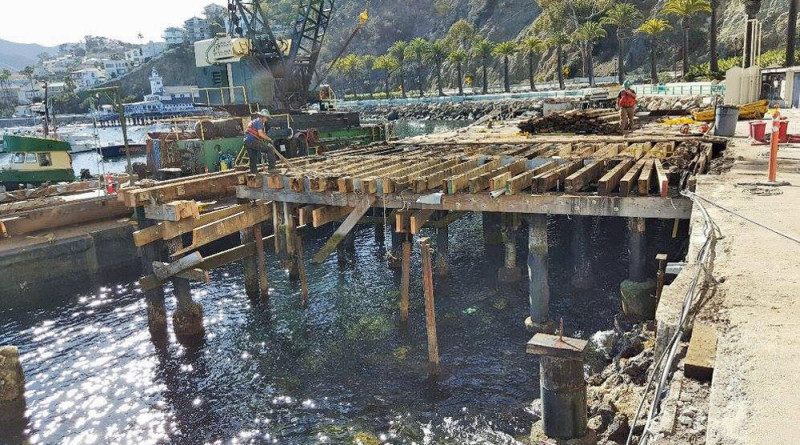 Construction of the Avalon Fuel Dock will be overseen by a diver who will ensure that the dock is being installed correctly on the ocean floor. City of Avalon photo

AVALON — Change isn’t cheap. The Avalon City Council realized as much on March 15, when its members approved changes to two revitalization projects and a plan to make harbor traffic a little more efficient.

Avalon hired a diver to conduct underwater monitoring services as part of the fuel dock upgrade, an expenditure city staff confessed was necessary but initially overlooked. The city will also spend an additional $5,500 to study community input for the Cabrillo Mole Revitalization Plan. A planned mooring exchange to allow cruise tender boats to use both sides of Float 5 could result in the city losing up to $7,392 in revenue.

Building an on-the-water fuel dock means someone needs to monitor the progress of underwater work. As Avalon makes progress on the rebuild of its fuel dock near the Casino a diver will inform workers whether piers and other materials supporting the new infrastructure are properly placed into the sea floor.

The City Council unanimously approved a request to add geotechnical services to the fuel dock project.

Dennis Jaich, Avalon’s interim capital improvements director said his department requested the geotechnical services so a diver could be hired to ensure the fuel dock’s underwater infrastructure is secure and strong.

“The fuel dock is proceeding,” Jaich told council members. “We had one setback with the asbestos demolition removal, it cost us six weeks, but we’re still on schedule now.

“We may have overlooked the need for this at the beginning, that’s why it’s coming to you now, but we feel it’s very prudent to ensure [the fuel dock] is constructed properly on the ocean floor,” Jaich continued.

The fuel dock, restrooms and buildings are still on pace to be completed by the end of May; restaurant construction will be completed later as part of the project’s second phase.

Jaich added the project is, to date, still within budget. Costs for fortifying the nearby seawall have not yet been determined but would not increase the budget beyond its approved 15 percent contingency.

Listening to the voice of the people isn’t always free. Regional Government Services (RGS) was hired by Avalon in September 2015 to develop a Cabrillo Mole Revitalization Plan as part of the plan development called for stakeholder outreach and input. While RGS completed most of the services it was hired to perform the firm requested an additional $5,500 to reach out to even more stakeholders to, according to city staff, “ensure a comprehensive assessment of the community’s input.”

Kendall Flint, a project manager with RGS, said her firm’s goals for the Cabrillo Mole Revitalization Plan was to determine its overall viability, identify revenue opportunities, engage the public for input and drive economic development through involvement of local businesses and interests.

The firm also plans to host a community open house before submitting its final report to council members in May. The final report would likely recommend a public-private partnership to execute the Cabrillo Mole revitalization.

Cabrillo Mole is the official boat landing for travel in and out of Avalon and Catalina.

Council members approved pursuit of a mooring exchange to allow Carnival Cruises to use both sides of Float 5 for its tender boats.

Carnival Cruises has been using Float 5 at Cabrillo Mole to run its tender boats and transport passengers to and from the island since July 2014. The cruise line has only been using one side of the float but now, in an effort to ease congestion, seeks to unload passengers on both sides.

Two existing 40-foot moorings would have to be dropped in order for Carnival Cruises to use the other side of Float 5; the tender boats are 80 to 90 feet long. One mooring is on a city lease and the other is privately owned.

City officials approached the owner of the privately owned mooring, who, according to city staff, is willing to sell his space, and offered him an opportunity to make a trade for one of two moorings.

One of the moorings, a 50-footer, was recently returned to the city after its lessee passed away. The owner of the 40-foot mooring, according to city staff, is willing to either trade his 40-foot and 30-foot mooring for the 50-foot mooring. Alternatively he is also willing to do an even exchange of 40-foot moorings to allow the city-leased spot by Float 5 to open up and allow Carnival Cruises expand its uses of the area.

The exchange will result in the city potentially losing up to $7,392 annually from two 40-foot moorings. City staff stated Avalon would be able to recoup the lost fees if council members agree to increase the cruise ship wharf fees at a later meeting.