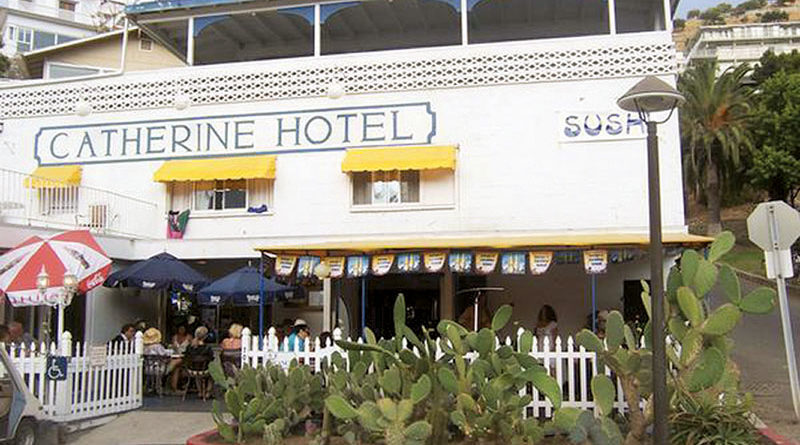 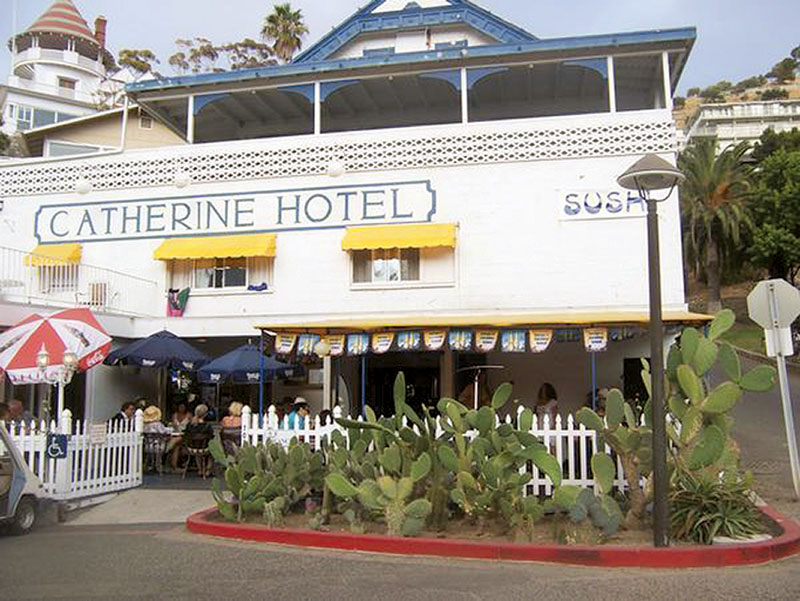 AVALON — The Catherine Hotel, known to many as “the first hotel off the boat” and home of the “coldest, cheapest beer in town,” was purchased by the Catalina Island Conservancy April 2.

The hotel, located at the corner of Crescent Avenue and Pebbly Beach Road along Avalon Harbor’s waterfront, was originally constructed in 1911. In recent decades, the small blue and white, 11-room hotel with yellow awnings has been known as one of the least expensive spots to spend the night at the island, and its bar had become a tourist staple.

“We are very excited about the acquisition of this property and how it will enable us to enrich our conservation, education and recreation program offerings, and vastly improve service to visitors to Avalon and island residents,” said conservancy president Ann Muscat in a prepared statement.

The Catalina Island Conservancy, which oversees nearly 88 percent of Santa Catalina Island and its unique plant and animal species, had been searching for a new home for its visitor-serving center, currently tucked away along Claressa Avenue, one block up from the waterfront.

The new site would place it front and center for tourists walking from the Cabrillo Mole, where the cross-channel carriers drop off visitors to the island.

“We will relocate our visitor- and island resident-serving activities to the Catherine Hotel and maintain our offices at their current location at Conservancy House on Clarissa Ave,” Muscat said. “This will allow us to significantly upgrade the experience for Avalon visitors and Island residents who seek information about Catalina’s unique plants and animals, conservation efforts, or who want to experience the interior.”

While the conservancy has clear plans to use the hotel rooms as extra housing space for scientists and interns that conduct research on the island, they have been vague about whether or not the site will retain its status as a hotel available to island visitors.

In the press release, Muscat stated that the conservancy “will continue to operate the new location as a hotel, enabling us to provide affordable, temporary accommodations for researchers, student interns and others doing short-term projects for us, as well as provide accommodations for eco-tourists.”

“Will it be like a hotel that you can just come down and check into? I’m really not sure,” said Bob Rhein, the conservancy’s director of media relations. “I don’t think we’re going into the hotel business. This will be mainly for our researchers and eco-tourists, but I don’t think that’s been hammered out quite yet.”

The hotel’s current condition could be called outdated at best, and a quick check of online hotel reviews has the Catherine Hotel ranked 19th out of 19 Catalina hotels — according to tripadvisor.com.

According to Rhein, the first plans for the site will be to renovate and update the first floor’s visitor service area, and get it up and running by this summer. Renovations to the hotel rooms would follow.

“The hotel hasn’t exactly been kept up to date, and it’s going to take some time to get everything situated in there,” Rhein said.

According to Muscat, upgrades will include a new façade, educational exhibits, improved retail space and, potentially, a “theme food and beverage experience” that could include live music. Eco-tour packages and information about Catalina’s two nature centers, the airport and the Wrigley Memorial and Botanic Garden will be added on the site, as well.

“This is where you’re going to be able to pick up Jeep eco-tours, and get bike memberships and hiking permits for the island’s interior,” Rhein said. “It’s all going to be right out in public, and that’s going to do well for both the city and the conservancy.”

The purchase of the Catherine Hotel came following an anonymous seven-figure donation made to the conservancy. The hotel had been listed on Luxury Real Estate magazine’s website for sale at $5.695 million.

Finding a more easily accessible visitor site for the Conservancy was part of a recommendation by William McDonough+Partners, an architecture, design and consulting firm that collaborated with the conservancy to develop “Imagine Catalina,” the Conservancy’s 20-year master plan completed last November.

Some of the future projects in the plan include a renovated Eagle’s Nest Lodge at the Conservancy’s Middle Ranch complex and upgrades at Wrigley Memorial and Botanic Garden and the Nature Center at Avalon Canyon. In addition, a gondola type of transportation has been envisioned to take visitors to the top of Divide Road, which offers views of both of both the windward and leeward sides of the island.

Mel Dinkel, the conservancy’s chief operating officer who overseas visitor services, noted that the size and configuration of the old conservancy visitor center made it challenging to properly serve visitors, but the new site should alleviate the situation.

“Currently, conservancy staff provide general information about the island, and camping information; issue hiking permits, (and) biking memberships; stage Jeep Eco-Tours; and run a small retail operation in a footprint of less than 200 square feet, while welcoming more than 20,000 visitors to the building annually,” he said.

“There are summer days when the lobby is packed and the line winds outside into the driveway and hot sun, which is not the kind of experience we want to offer visitors to Avalon,” Dinkel said.

Leslie Baer, the conservancy’s chief of educational outreach and marketing, noted that surveys done by both the conservancy and the Catalina Chamber of Commerce suggest that the more visitors to Avalon know about what there is to do on the island, the longer they stay and the more often they come back.

“We are looking forward to increasing visitor awareness about how they can augment their stay in Avalon through taking advantage of hiking, biking, camping, kayaking, touring, our nature centers, the airport and the Wrigley Memorial and Botanic Garden,” Baer said.