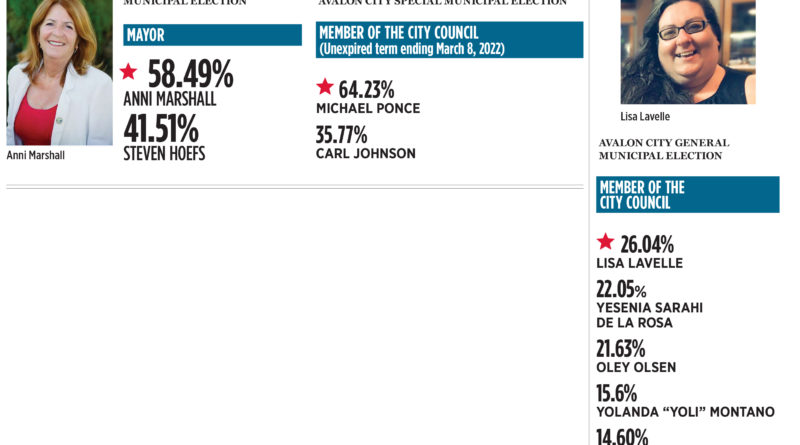 The mayor’s seat, two four-year council seats and one council seat with a term ending in 2022 were up for grabs.

Marshall has served as Avalon’s mayor for the past six years.

“I am so happy the majority of Avalon voters demonstrated their confidence in me as their mayor once again,” Marshall said in an email. “I appreciate their support as the City Council works on many important issues going forward. I welcome those newly elected. I know with ongoing open communication and cooperation much will be accomplished.”

In the City Council race, two four-year seats were up for grabs. The seats were held by Oley Olsen, who ran for re-election and Pam Albers, who died suddenly in May 2019. In June 2019, Hoefs was selected by the Council to fill Albers’ seat until the end of the term; Hoefs ran against Albers in the 2018 election, losing by just 16 votes.

“I’m ecstatic with what the results are showing currently and hope that the trend continues,” Lavelle said in an email.

Lavelle and De La Rosa would be first-time Avalon City Council members. Lavelle grew up in Avalon and is currently on the Board of Directors for Catalina Island Chamber of Commerce & Visitors Bureau and previously served a term and a half on the Planning Commission. De La Rosa was also raised in Avalon by what she described as hard-working, immigrant parents. She went on to attend San Diego Mesa College before returning to Catalina to work.

Olsen has served on the council for eight years. He is retired and worked for the Catalina Island Company for 35 years and owned several businesses.

A special election was also held to fill the seat of former council member Richard Hernandez, who resigned in July 2019. He did not provide a reason for his resignation and did not return multiple requests from The Log for a comment on his departure. After several, somewhat heated discussions, the City Council in September voted to hold a special election to fill the seat.

The special election seat, with a term expiring in 2022, was swept by former council member Michael Ponce who claimed 65.02 percent of the vote over Carl Johnson, who would have also been a City Council newcomer.

Ponce serves as a board member at the Catalina Island Medical Center and is a former council member and planning commissioner.

Election results are still considered preliminary; final results will be certified within 30 days of the election.