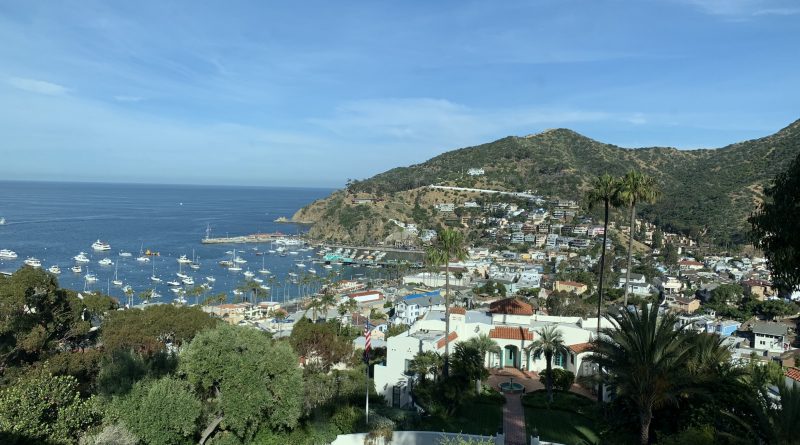 Plans to update Avalon Harbor's Cabrillo Mole Ferry Terminal (seen at the far end of the harbor) could be altered due to a funding snag. Parimal M. Rohit photo

Construction for phase one of the Cabrillo Mole Ferry Terminal Revitalization Project has been underway since August 2019 but hit a snag when it was realized the extent of the damage was far greater than the design report estimated.

The city began work on the 50-plus-year-old Cabrillo Mole Ferry Terminal in August 2019 to repair structural damage due to time and corrosion from the harsh marine environment. The mole and wharf structure was originally constructed in 1968, and functions as both a breakwater and the main docks for cross-channel passenger boats including the Catalina Express. According to a Coastal Commission staff report related to the project, nearly one million passengers passed through the terminal annually for the past 36 years.

According to city staff, as the construction progressed, incremental increases in quantities for beam and deck repairs were realized. The staff report stated the extent of the damage was found to be far greater than the design report estimated.

Despite a contingency factor, which added 25 percent to the final total to account for uncovering additional damage, estimates were coming too short to complete the necessary work. According to city staff, the need for supplemental funds to complete the work is even greater than the original shortfall of the low bid and the engineer’s estimate with contingency.

Partially due to Covid-19, additional funding options are limited and several alternatives have been explored to contain costs while still completing the necessary scope of work. The City Council voted at their July 21 meeting to move ahead with one of those options.

Additionally, city staff said those eight beams were previously repaired in 1990 and they have an additional five years of service life in the condition they’re in right now.

The work could be delayed until a future phase up to five years in the future or could be packaged with the upcoming phase two.

The second phase of the project is a more robust effort to rehabilitate and transform the ferry terminal and floats into a complete multimodal transportation facility that will serve the community for the next 20 years and beyond. The effort will include a new ferry terminal building, float rehabilitation and enhanced land transportation facilities. Preliminary engineering has commenced on the second phase and construction could possibly begin in late 2021.

The project is being funded by significant federal grants from the Federal Transit Administration in addition to local harbor matching funds. According to a staff report, potential fiscal impacts could mean the Harbor Wharfage Fee increase approved by City Council in March 2019 may have to be extended.