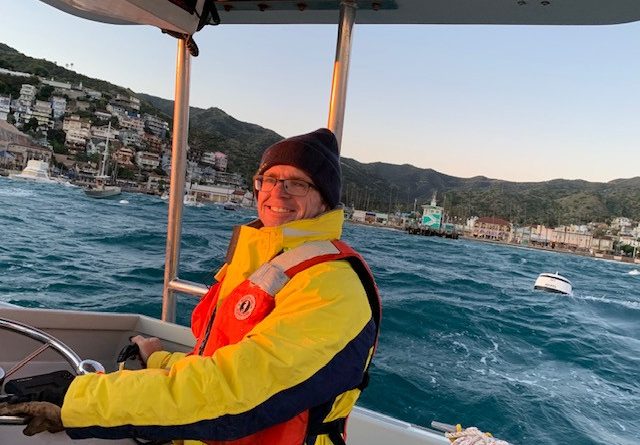 “You caught me at a good time,” Interim Harbor Master Orne Carstarphen said answering his phone on a Thursday afternoon. “I just came back for lunch. We’ve been trying to get a boat in the water.”

Former Assistant Harbor Master Carstarphen is serving as the interim harbor master, following JJ Pointdexter’s retirement from the role on Sept. 30. Carstarphen will perform the duties of the harbor master until the city decides who will serve in the position going forward.

“I feel pretty honored to be in this position,” Carstarphen said. “It’s your hometown, you’re honored to be able to work in any position serving your community.”

Carstarphen started working for the Avalon Harbor Department in 1991 as a part-time harbor patrol assistant. He moved up the ranks, joining the department as a full-time harbor patrol officer in 1997. He later was promoted to supervisor, where he served as the captain of rescue boat two and was responsible for training for the department. In 2017, he became assistant harbormaster.

“The idea of working on the ocean was obviously a lure,” Carstarphen said.

Carstarphen was exposed to the boating industry at a young age and grew up on the ocean. His parents, Jack and Ruth Carstarphen, ran a charter boat, Maverick, in the Caribbean in the 1960s and 1970s. His uncle also ran a charter operation out of Los Angeles Harbor, Resolute Sailing, which still runs to this day.

His parents moved to Avalon from the Caribbean in 1973, when Carstarphen was in the third grade. His parents had previously been liveaboards in Avalon Harbor, after World War II in the late 1940s. Carstarphen himself would later also be a liveaboard in Avalon Harbor on 36-foot monk trawler in the mid-1980s. Outside of two years he spent attending Long Beach City College and a few years living in Europe, he has lived his whole life on Catalina Island.

“I came back to Catalina because, I hate to say it, out of all the places I’ve been its one of the most unique,” Carstarphen said.

Prior to working for the Harbor Department, Carstarphen worked as a paid-call firefighter in Avalon for the Los Angeles Fire Department and obtained an EMT certification. He went on to get a U.S. Coast Guard Captain’s License. While he was working in the harbor department as a part-time harbor patrol assistant, he also worked as a vessel assist captain and worked a few other part-time jobs, including a short stint working on one of the glass bottom boats. He eventually ended up owning 10 percent of the local vessel assist enterprise, Cat Tow, Inc. He seized the opportunity when a full-time position in the Harbor Department became available in 1997.

In his time with the Harbor Department, Carstarphen has taken advantage of the training offered by the city including incident command training, law enforcement training and medical training.

With the many responsibilities and tasks that come with being the assistant harbor master and now interim harbor master, Carstarphen said his favorite part is being out on the water.

“My favorite is just really being out on the boat and working with the people,” Carstarphen said. “We really have a much closer bond with [the boating community], I think we’re really lucky to have that.”

He said he is grateful to be working for such a friendly and supportive boating community.

“When you’re driving down the row and you’re doing your mooring work, people make a point to say ‘hello, come on over, chat with me for a moment,’” Carstarphen said.