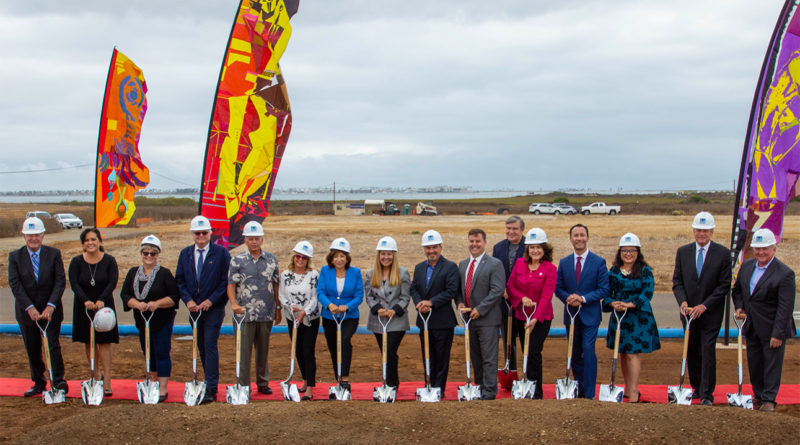 The Port of San Diego plans to finalize schematic designs for portion of updated harbor area.

SAN DIEGO—Things are finally happening – a “South County” waterfront development in the planning stages for years is finally on the verge of coming to life. The early stages of construction work at Chula Vista Harbor appear to be underway, as the Port of San Diego and Chula Vista city leaders held a groundbreaking ceremony on the site of the planned development on Sept. 26.

Commissioners, City Council members and representatives of Sun Communities were all on hand for the Sept. 26 groundbreaking ceremony. The groundbreaking served as the starting point for the first major projects of the Chula Vista Bayfront redevelopment: Costa Vista RV Resort and Sweetwater Bicycle Path & Promenade.

Chula Vista’s Bayfront will transform the southern end of San Diego County, bringing in new amenities for boaters, residents and visitors alike. In all, about 535 acres of land adjacent to the Chula Vista waterfront would be transformed with a hotel, convention center, retail, dining, RV camping, shoreline promenade, parks, open space and walking trails.

Construction on the RV resort, which is located at E Street and Bay Boulevard, will be the first component to move forward. Port district staff stated the RV park would increase public access and recreation by providing lower-cost overnight accommodations along the waterfront – something the California Coastal Commission has recently been pushing developers to include in their respective projects.

“[The RV park] will … pave the way for the anchor of the Chula Vista Bayfront Master Plan, the future resort hotel and convention center, as well as the future Sweetwater and Harbor Parks, and roadways,” Port district staff stated.

The Sept. 26 groundbreaking followed a presentation of schematic plans of the Bayfront’s park space at the Port of San Diego’s most recent Board of Port Commissioners meeting.

Chula Vista’s redeveloped waterfront would include as much as 200 acres of parks, public open space, promenades and walking trails. Two of those parks – Harbor and Sweetwater – were presented to commissioners during their Sept. 16 meeting. Both parks are located within the Bayfront project.

The board’s Sept. 16 meeting was held at the Manchester Grand Hyatt in Downtown San Diego.