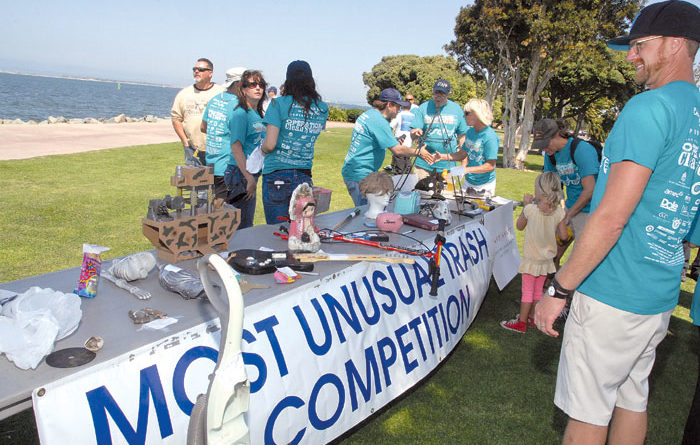 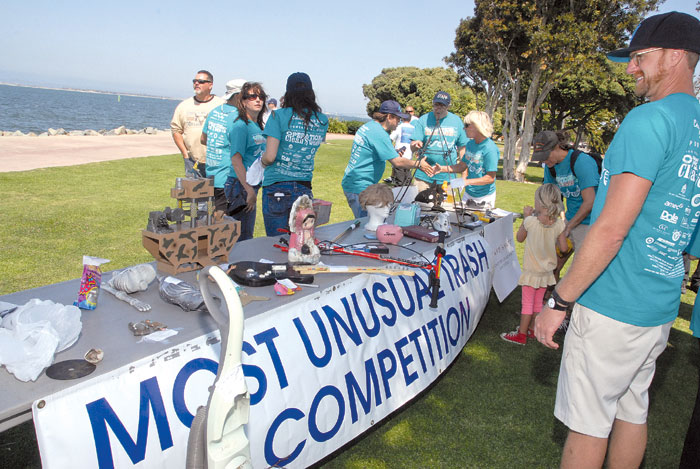 SAN DIEGO — “It’s not every day you find a full-size washing machine in the middle of the bay,” said Capt. Robert Butler of Vessel Assist said, as he stood next to a rusty, barnacle-encrusted hunk of metal he found on the bottom of the harbor at California Yacht Marina.

The washed-up washer was removed, along with other debris, during the 23rd annual Operation Clean Sweep cleanup of San Diego Bay. “I’m pretty sure when we get done, we’ll find the dryer,” Butler added.

Butler surveyed the bay aboard a Vessel Assist powerboat, locating large debris with the help of a sonar system. He was joined by boaters aboard pleasurecraft and inflatable boats  — and Navy dive vessels with Navy divers.

The divers scoured the bottom of the former A-8 Anchorage and California Yacht Marina — finding old sailboat masts, fuel tanks and engines (including an old Chevrolet motor), a 50-gallon drum filled with cement, an eroded 100-gallon tank, lead-acid car batteries and other miscellaneous masses of metal, many of which had to be hoisted from the water with a large crane.

“Operation Clean Sweep is a worthy event powered by its volunteers and sponsors,” she said. “The Port of San Diego, port tenant businesses and the military depend on a clean bay. It is our backyard — and this event is about us cleaning our backyard.”

On shore, volunteers included military families, families and friends of locals who work in shipyards, port tenants and staff members, hotel employees, San Diego Gas & Electric employees, and others who work on the bay. They did their part by gathering up debris that had washed up on the shore side of F Street Marsh, Chula Vista; Pond 20 in Imperial Beach; Convair Lagoon and other nearby areas.

If they weren’t throwing chunks of cement into bins, volunteers were operating forklifts and moving the fast-filling trash containers to make room for empty ones.

In each of the 23 years of Operation Clean Sweep, at least one volunteer has found something truly notable while digging through the bay’s depths. Since its beginning in 1990, Operation Clean Sweep’s unique trash finds have included a telephone booth, a baby stroller, a bubble gum machine, five bikes, a helium tank, a message in a bottle, a large clock, a bag of 12 gauge shotguns, fishermen’s boots, many sunken boats, a toilet, a canopy and a dishwasher.

In fact, so many odd things have come out of the bay that in 1999, Operation Clean Sweep began its first official “Most Unusual Trash Competition.” This year, the finder of the weirdest piece of garbage wins passes (donated by Next Level Sailing) aboard an America’s Cup yacht. Runners-up are awarded a one-night hotel stay or restaurant gift cards.

Like any good competition, this one is judged. The judges vary from year to year, Silvestri said. They’re “normally made up of Navy and Coast Guard officials, city mayors, council members, county supervisors, executives from sponsoring companies and our association’s chair.”

The competition takes place immediately after the cleanup, during the afterparty. To find it, participants could look for the sign that read “Most Unusual Trash Competition. Or, they could simply look for the giant section of stadium seating, found in the inlet adjacent to Marina View Park in Chula Vista, which won this year’s grand prize.