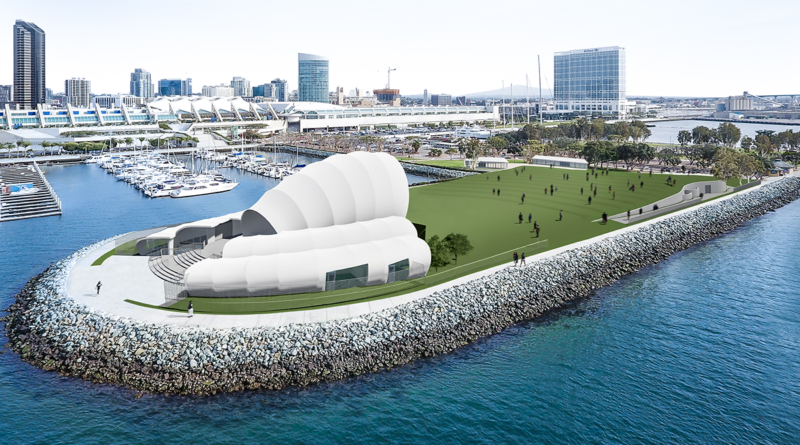 SAN DIEGO — A stretch of San Diego’s downtown waterfront slated for significant redevelopment projects was at the heart of two items vetted out by the Port of San Diego’s Board of Port Commissioners, Jan. 9.

Commissioners spent a few minutes reviewing and approving details of a proposed project hoping to bring a permanent outdoor performance and event venue to the Convention Center area. The quasi-judicial board specifically certified a Final Environmental Impact Report and approved a Letter of Intent with San Diego Symphony.

The Bayside Performance Park venue would be built at Embarcadero Marina Park South, near the Marriott Marquis and Fifth Avenue Landing.

San Diego Symphony proposed to bring the outdoor performance and events venue to the city’s Embarcadero Marina Park area; the arts organization, according to the port district, invest about $45 million to make improvements and ultimately provide an outdoor venue for concerts and other events.

“Each year in the park, the Symphony assembles and disassembles a music-festival-style stage, bleachers, seating, ticketing booths, concession stands, food stands, portable bathrooms, a chain-link fence and other items for the summer season,” port district staff stated. “The proposed Bayside Performance Park would allow the Symphony to offer a limited number of performances and events year-round by replacing the temporary performance and event venue with a permanent stage and acoustic shell.”

Commissioners directed staff to negotiate terms with Protea, despite port district staff’s recommendation to move forward with Stream Realty Partners. Whether commissioners ultimately select Protea will be contingent upon both sides renegotiating the proposed fee structure.

Stream Realty Partners proposed a fee structure much more amenable to port district costs, however Protea made the case it was better suited to work with the project’s developer – 1HWY1 – and oversee a transition from away the current management regime, which is set to legally expire on Sept. 30.

Seaport Village, home to several restaurants and shops on the Downtown San Diego waterfront, is part of a larger overhaul of the city’s Embarcadero – including the Bayside Performance Park proposal (above), new boater and visitor-serving amenities and a Space-Needle-like structure.