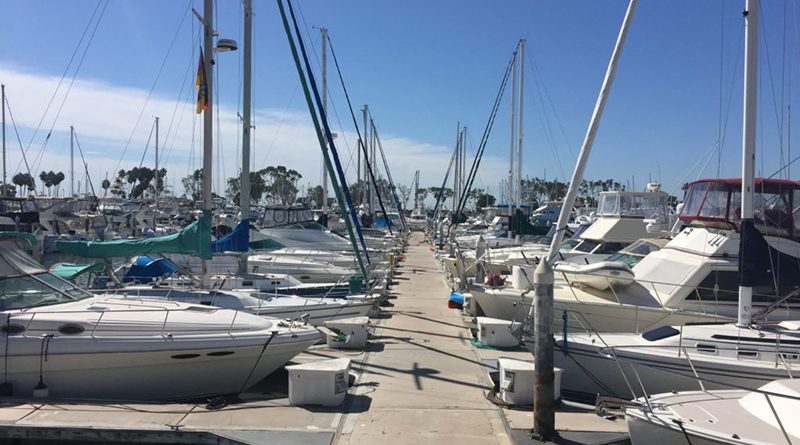 Tenants received a letter in June alerting them all slip rates would increase by 26 to 90 percent starting Oct. 1.

DANA POINT— Plans have been announced to increase slip fees in Dana Point Harbor as construction nears for a large-scale redevelopment of the marina. Bellwether Financial, a part of Dana Point Harbor Partners, the collaboration created to operate and redevelop the harbor, sent a letter to marina tenants on June 21 alerting them on Oct. 1 rates on all slip categories will increase.

Rates for slips under 30 feet will increase by 26 percent and rates for the largest slip categories, 55 feet, and 60 feet, will increase by 90 percent. In the letter, Bellwether said increases will fall more on the large categories because they believed on a relative basis the small boaters have been subsidizing the larger vessels.

“For the vast majority of boaters, it’s under $100 a month increase but at the same time that is significant, but we tried to be very thoughtful in this process,” said Joe Ueberroth, founder, and president of Bellwether Financial Group.

Bellwether used slip rates from public marinas in Orange County, 11 marinas in Newport Beach Harbor, two in Huntington Harbour, and one in Sunset Beach, to calculate an average and a market rate. The data used by Bellwether and provided to the Log shows rates in all 11 Newport Beach Harbor marinas were more expensive than the current rates in Dana Point and rates after the increase. The rates in Sunset Beach and Huntington Harbour were slightly higher or lower than current rates in Dana Point and all lower than the new rates.

Bellwether said after the rate increase, all slip categories will still be approximately 35 to 45 percent below the current Orange County average they calculated.

“We look at our market as being Orange County and we think that over time we should be at the average, not leaving it, but when you look at Dana Point it’s such a wonderful spot, it’s a gem on the coast, we’re completely full, we have thousands of people that are on the waitlist,” said Ueberroth.

The Dana Point Boaters Association, a recreational boating advocacy group, has expressed their disagreement with the size of the increase and rationale and methodology cited for the hike.

“It’s going to force a lot of the smaller boaters out of the harbor because they’re just not going to be able to afford it,” said DPBA President Anne Eubanks.

She said everyone was anticipating a slip fee increase as part of the reconstruction of the marina but wasn’t expecting such a significant increase.

On June 25, DPBA sent a letter to Orange County Supervisor Lisa Bartlett asking the county to step in and address the “affordability.” The county’s lease with DPHP provides DPHP the authority to establish market rates for transient boat slips but DPBA argued the increase is inconsistent with the terms of the Dana Point Tidelands Trust in that Dana Point Harbor is intended for public use and recreation for all citizens of California regardless of financial capacity.

“The rates being implemented by DPHP are not determined by the County nor the Board of Supervisors and do not appear to violate the Tideland’s grant,” Supervisor Bartlett replied in July 1 letter to the DPBA. “With that being said, I encourage stakeholders to work together on addressing the economic impacts…”

Eubanks questioned the methodology for establishing the market rate, saying a majority were in Newport Beach Harbor, where the closest rate was roughly double Dana Point’s current rates. She said she believed they should take into account slip prices in other public marinas in Southern California such as Long Beach, Oceanside, and San Diego.

“To take an average of just Orange County marinas and say that Dana Point is under market is not a good analysis in our opinion,” said Eubanks.

The slip rate increase comes as Bellwether prepares to begin a long-awaited marina redevelopment, which was cleared to begin construction by the California Coastal Commission in February.

“The whole concept of the new marina was to keep the small boaters there, it’s for the benefit of the public, which is why the average slip size couldn’t be over 32 feet,” said Eubanks.

A local coastal program amendment issued by the Coastal Commission in 2009 restricted slip loss to no more than 155 slips and mandated an average slip size to not exceed 32 feet.

Bellwether acknowledged for some boaters, the rate increases will drive them to look at alternative facilities and said they are hopeful the advanced notice will be helpful in that endeavor.

“A lot of them are still excited, they think it’s the best deal in town still and they want us to revitalize, start our construction,” said Ueberroth.

He said they are hoping to start construction at the end of this year. The complete redevelopment of the marina will take place over a five-year period.