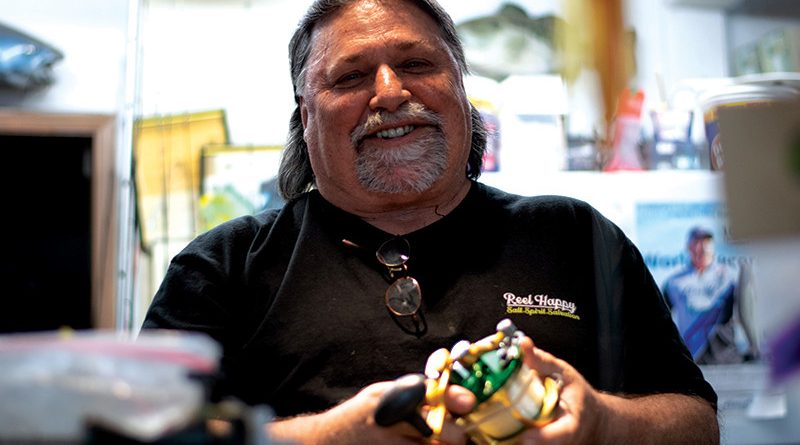 Bill van Wulven, owner of Barnacle Bill’s Bait and Tackle in Lemon Grove, respools a fishing reel for a customer on July 16. After 20 years of ownership, van Wulven is retiring and selling the store to Dana Landing. Lindsey Glasgow photo

Van Wulven has owned Barnacle Bill’s Bait and Tackle in Lemon Grove for the past 20 years and has used it as a way to give back to the community.

LEMON GROVE一 I never knew a day of fishing could change my life. Those words, written to Bill van Wulven more than 40 years ago by a wounded soldier van Wulven saw on the shore of Lake Murray and invited fishing, inspired and fueled a legacy of giving back to the community through dropping a line in the water.

“And I don’t know why I said this but I felt compelled to say hey do you want to go fishing with me,” said van Wulven. “… and about a year later I get a letter from the guy… that’s why I started doing more charity work.”

Van Wulven is the owner of Barnacle Bill’s Bait and Tackle in Lemon Grove and after 20 years of greeting customers by name, doling out fishing advice, and giving back to the community, van Wulven is retiring and selling the store to Dana Landing, a bait, tackle, and sportfishing charter business in Mission Bay.

He said a big factor in his decision to retire was losing his wife Carole to lung cancer last year.

“Paying it forward is me and my wife and that’s what we’ve done and losing her was a big deal,” said van Wulven.

Giving back has become a large part of what van Wulven and Barnacle Bill’s have become known for in the San Diego fishing community. It also helped earn him the honor of becoming a San Diego Council of Bass Clubs’ Bass Fishing Hall of Fame member in 2008.

“I can’t think of anyone who’s done more for children in the fishing industry than Bill,” said Jim Putney, a former president of the San Diego Council of Bass Clubs.

Van Wulven has been involved with various charities including the Wounded Warrior Project, Boy Scouts, Girl Scouts, and Autistic Society of San Diego. He has donated rods and reels to children’s programs, taken veterans fishing, helped the Girl Scouts regrade and fill a fishing pond, and ran his own children’s education program, among countless other donations.

“It [the store] was a vehicle for me to do all the charity stuff that I do,” said van Wulven.

“Mostly what I’ve done all my life is music and fishing,” said van Wulven.

Van Wulven spent the early years of his career working in the music industry, first on the road with bands and then at two professional music stores. He purchased Barnacle Bill’s Bait and Tackle in November 2001.

“Had my name on it already, there’s only two Bills, the original, and me,” said van Wulven with a laugh.

Nobody feels like a stranger in the highly trafficked mom-and-pop store, which has earned a reputation of being more than just a place to buy saltwater and fresh water fishing gear. Van Wulven is happy to spend the time helping customers get the tools and knowledge they need to be successful on the water and customers share their appreciation in the form of photos with their catches, which are scattered around the store.

“He was just always willing to help and answer questions,” said Mike Overy.

Overy was one of van Wulven’s first customers and has become one of his good friends, fishing buddies, and even helps out at the store.

“When I started switching over to the fresh water side, and it’s a totally different type of fishing than saltwater, he helped me, educated me, and actually turned me into a pretty good fisherman,” said Overy.

“The secret is really spending the time till they understand what you’re teaching them,” said van Wulven.

In his retirement van Wulven said he plans to do more of what he’s done most his life, music and fishing.

He said he also plans to continue giving back to the community.

“He ran a great store, he was a great community supporter,” said Putney.