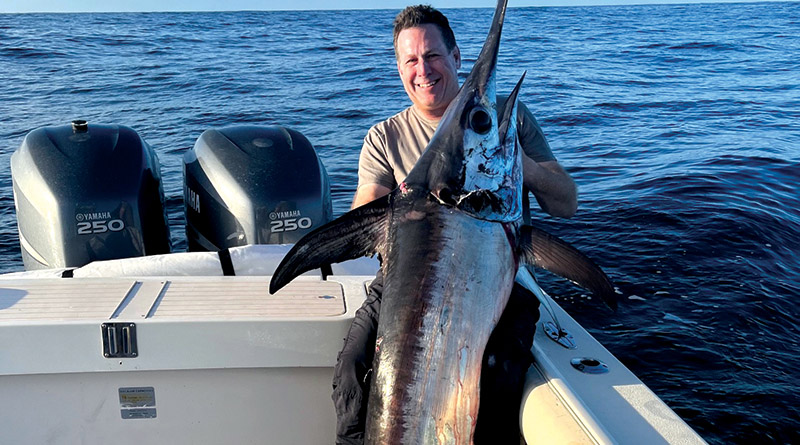 SAN DIEGO一 The first two-plus weeks of January have provided some pleasant fishing conditions for Southern California saltwater anglers and some boats have been getting out on the water to take advantage of the good weather to do some fishing. The great news is the first two weeks of January have confirmed that bluefin tuna are continuing to winter in our local offshore waters. There were three sport-boats that I know of out fishing for bluefin on 1.5-day trips last weekend and they combined to catch eight bluefin tuna and 34 bonito.

Most of the bluefin catches made during the month of January have been made up of fish in the 30 to 80-pound range. With the offshore water temperature holding in the 59.5 to 60.5-degree range, we might well see bluefin in local offshore waters year-round if we continue to have such mild winter weather.

The past weekend also saw some sport-boats head down the Mexican coast for 1.5 and 2.5-day trips to the Punta Colnett region to target yellowtail, reds, lingcod, and an assortment of bottom fish species. What they found was excellent fishing for a mixed bag of reds, assorted rockfish, whitefish, sheephead, lingcod, and yellowtail.

The Punta Colnett region yellowtail included a good percentage of fish running about 14 pounds. The wintertime yellowtail activity in the Punta Colnett region tends to come from locating meter marks or sonar marks and then fishing with yo-yo iron or with live baits that are dropped down to the meter marks using a dropper loop rig. Seaforth Sportfishing reported that yo-yo iron was working well for yellowtail aboard Tribute and that the Salas 6X Jr. in the blue and white color combination was a hot jig.

A productive area for the rockfish fishing around Los Coronado Islands has been the hard bottom to the north and northwest of North Island with a good depth range being in 30 to 50 fathoms. There has also been good fishing in deeper water as Seaforth Sportfishing has been suggesting being prepared to fish deep water by bringing tackle that includes some 16 to 20-ounce sinkers and an outfit with a rod that is capable of fishing those 16 to 20-ounce sinkers at depths down to 800 feet (133 fathoms).

Yellowtail have been located by finding spots of breaking fish, sonar marks, or meter marks with yellowtail tending to be found around schools of mackerel, porpoise, and spots of working birds. A good depth range has been in 18 to 32 fathoms. Best bets for yellowtail have been surface iron or yo-yo iron with mackerel or sardines also getting bit when flylined or when fished deep on a dropper loop rig.

Anglers need to keep in mind that the annual month rockfish and groundfish closure went into effect in U.S. waters on Jan. 1. The closure will run through Feb. 28 and during the two-month closure period anglers will need to travel into Mexican waters to fish for the various rockfish and groundfish species covered by the closure. During the closure period, skippers fishing in U.S. waters will be focusing on species that are not covered by the closure such as calico bass, sand bass, sculpin, halibut, yellowtail, and white seabass. A reminder is to make sure you get your 2022 fishing license before venturing out to do some fishing in U.S. and California waters.

Much of the fishing along the San Diego County coast during the cold water months of the annual two-month rockfish and groundfish closure is focused on targeting calico bass, sand bass, and sculpin by fishing hard bottom and structure spots. The Imperial Beach Pipeline has been one of the better areas since the two-month closure period started and has been producing good mixed bag fishing for sand bass, calico bass, sculpin, and perch. Other productive hard bottom and structure spots that have been producing a mixed bag of fish are the hard bottom to the southeast of the Whistler Buoy at Point Loma, the hard bottom to the northwest of Buoy #3 at Point Loma, the Lighthouse Ridge off the Point Loma Lighthouse, the Jetty Kelp hard bottom outside of Mission Bay, the Variety Kelp hard bottom off Pacific Beach, the Anderson and Buccaneer Pipelines, the artificial reefs outside of Oceanside Harbor, and Box Canyon.

The 2022 fishing season is off to a good start with bluefin tuna among the list of species available to target within the 1.5-day range of Point Loma. I hope you can get out on the water and enjoy some of the fun fishing that the winter months have to offer. Keep on fishing and I hope to see you out on the water sometime soon!