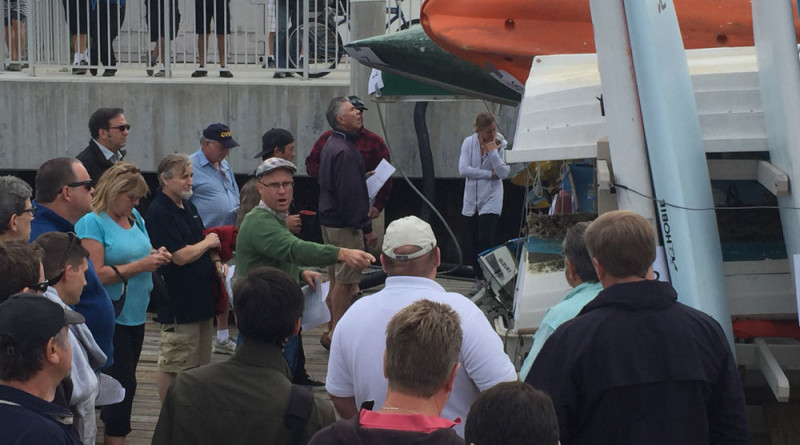 SOUTHERN CALIFORNIA — You want to buy a Boston Whaler but don’t have $250,000 sitting around. What if you could buy a Boston Whaler for $10,000 or $20,000? Great buys can indeed be found at boat auctions for savvy veterans and the most novice of bargain hunters alike. Taking a few easy steps to know what you are buying and the risks involved can go a long way to making boat auctions an enjoyable experience.

The Log attended a boat auction in Newport Beach and spoke with a few boating experts and auction attendees who provided perspectives of how to avoid rough waters and enjoy smooth sailing throughout the boat auction process.

“Proper planning prevents poor performance,” an iteration of a U.S. Marine Corps adage says. If you are going to buy a vessel at a boat auction be sure to be armed with as much information as possible. How much would the vessel sell for on the open market? What are the selling prices of similarly classed vessels? What is the vessel’s condition? Does the vessel need repairs? If so how much will the repairs cost? Is the vessel currently in the water or on stands?

“Get some quotes. A lot of people have to hire someone to do the work. Get an evaluation by [looking at] comparables. Get your costs in line with what the boat needs,” said Mike Costa, a broker with Certified Sales.

2. Keep a budget and stay within it

The best way to know a vessel’s retail value is to look at comparables. Prospective bidders should study Yachtworld.com, one of the largest sites on boats for sale, Costa suggested. If you’re headed to a boat auction in San Diego and there is a Catalina 27 available be sure to research similar cruising sailboats in the 25- to 30-foot range and built in a similar timeframe.

Newport Beach Harbor Resources Manager Chris Miller said boat auction attendees should consider where they would store the vessel. Oftentimes storage is an additional cost and should be factored into the budget before committing to a boat.

Also factor in how much it would cost to transport the vessel to wherever you plan to have it stored.

Costa added hauling or loading fees are also something to add into your bottom line. Taking a boat out of the water or off stands is not free.

Do you plan to store the vessel at your residence? Be sure to check whether your city’s zoning laws allow or prohibit the parking of a boat on residential property.

Many auctions inform bidders all sales are final and without warranty. Vessels are sold as-is, so be sure to factor in any and all repair costs to the overall value.

3. Attend a preview or hire a surveyor

Nowadays it is easy to look at a photo of a boat or kayak on eBay or auction website and purchase the vessel with a single click. Buying a vessel site unseen, however, might not be the wisest action.

A visual checkup of your planned purchase can reveal damage not viewable in a photo or online posting, Costa said.

“Before you bid it’s a good idea to view the boat,” Costa said. “If they can’t inspect in person they could always hire a local surveyor to look at the boat.”

Check the engine and dipstick. Does the oil look clean? Does the propeller turn? Is there visible physical damage?

Surveyors could help catch repairs required in areas not visible to the untrained eye. What if the boat you want to buy is available at the auction because it sank in saltwater and remained underwater for a few days? The engine could be corroded in parts due to the salt. Such corrosion might or might not be visible during an inspection.

4. Be realistic about repairs

You might look at a fixer-upper boat and think, “Hey, I can fix this.”

Not all repairs are easy or affordable. Do you have the right tools and/or parts available? What if the repairs require more time than you realize? Where can you do the repairs? Have you properly determined the costs involved?

What if you discover some necessary repairs later in the process and cannot fix them yourself? How much would it cost to have someone do the repairs for you?

“The bidder might want to prioritize the repairs,” said Ted Sensenbrenner, BoatUS’s assistant director of Boating Safety, adding it would be wise to focus on engine repairs ahead of cosmetic items such as touching up paint.

Miller said he wants the boats sold at his auctions to go to people who want them. The last thing he wants to see is someone buy a boat in hopes of repairing it only to lose patience and abandon the vessel.

What types of boats or vessels are at auctions?

Any number of boats and vessels could be found at a boat auction, ranging from dilapidated to functional and in good condition.

Miller said buyers at the city’s auctions held two to three times per year, typically purchase dinghies, inflatable boats, kayaks, standup paddleboards or the occasional powerboat or sailboat. He pointed out kayaks generally sell in the $100 to $200 range, depending upon the condition. A brand new kayak purchased from REI ranges anywhere from about $300 to more than $2,000.

It is not uncommon to see a 25- or 30-foot sailboat sold at one of Newport Beach’s boat auctions. They might not always be in the best condition but some people are aware of the work that needs to be done and are willing to invest the time in upgrading whatever they purchase, Miller said.

Others might just buy a boat for the parts.

Marine Group Boat Works in Chula Vista hosts one to two boat auctions per year. The firm tries to have about 10 boats featured at each auction.

Where do the boats come from?

Most boats populating Newport Beach’s boat auctions are impounded from city tidelands. Proceeds from these boats sold directly benefit city tidelands, while other vessels are supplied from county tidelands or harbors, such as Dana Point Harbor or Huntington Harbour.

Los Angeles County has auctioned off abandoned or impounded vessels. A Sheriff’s deputy in Marina del Rey previously told The Log that purchasing an abandoned vessel at a boat auction could be risky as sometimes the required repairs could be worth more than the vessel would ever yield on the open market.

Other vessels available, according to BoatUS might be repossessed, leftover models from boat dealers, damaged boats from insurance companies or bankruptcy proceedings. 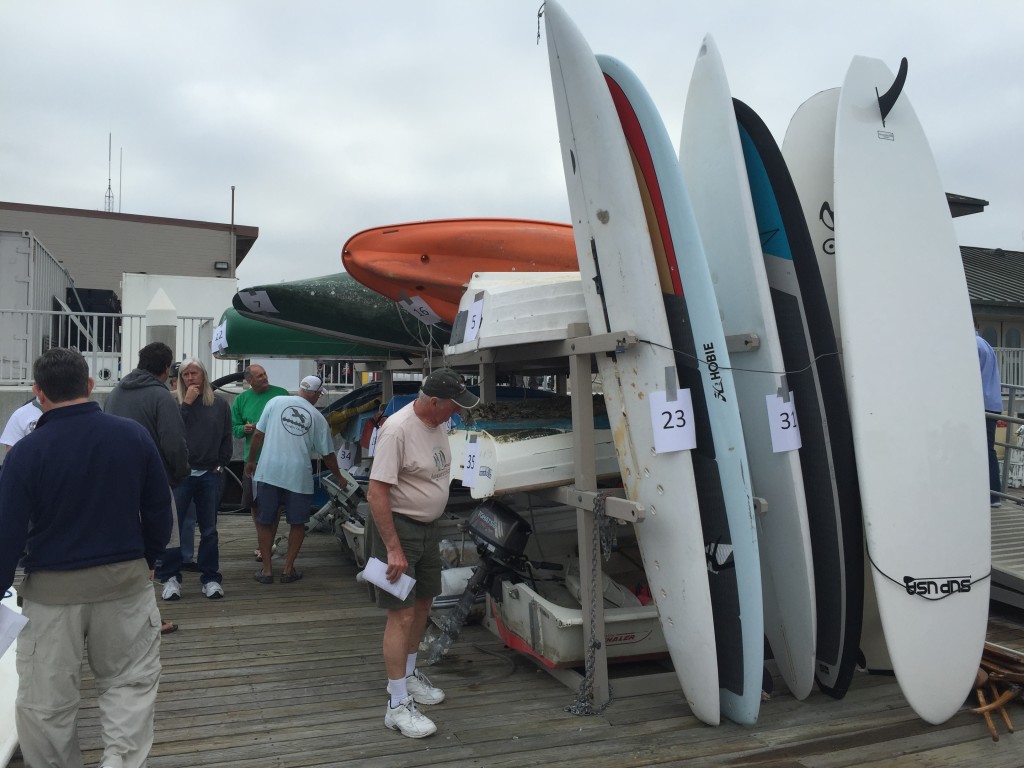 How do boat auctions work?

There is no set formula of how boat auctions operate. Some are done discretely.

Marine Groups Boat Works only offer boats at its actions.

The Chula Vista company posts its auction list on The Log and its website. Hard copies of the auction list are also available at the Marine Group Boat Works main office. The list is made public 20 to 30 days ahead of the auction.

“Arrive at the time stated on the advertisement and inspect boats,” Salgado said. “The auction starts promptly at 9 a.m. and boats will only be mentioned once during the auction.”

Some auctions are done by phone or email, according to Costa. Bidding also occurs on auction-style websites such as eBay.

All sorts of interested parties, ranging from the first-time buyer to the savvy regular, attend auctions. Representatives from boat dealers also make it out to these auctions, potentially looking for a value-buy to quickly flip.

The intensity of each auction item varies upon popularity and condition of model offered. A Boston Whaler in pretty good shape could endure a competitive bidding process, whereas a canoe might only have a handful of bids.

At a recent city of Newport Beach boat auction action ranged from nonexistent to intense. The city’s boat auctions are held at the Orange County Sheriff’s Harbor Patrol office on Bayside Drive where prospective bidders often arrive at the dock 45 to 60 minutes early to preview the goods.

Newport Beach only accepts cash at its boat auctions; all sales are settled immediately. Miller said each purchased vessels is usually off the docks and in the possession of its respective owner the end of the day.

Miller added any boats sold at an auction with a vessel registration, or CF, number must undergo a 10-day waiting period before the transaction is complete in order to give the previous owner one last opportunity to pay impound fees and reclaim his or her boat. It is not uncommon for the fees to be worth more than the vessel itself, meaning the previous owner would likely not reclaim his or her craft during the 10-day waiting period. If they do pay the fees, however, the person who bid on the vessel at the auction would receive a refund.

About 60 people crowded the docks in front of the Orange County Harbor Patrol station to inspect on March 18 to bid on about 50 vessels, mostly canoes, kayaks and sabots.

A 16-foot green Coleman canoe, for example, started at $40. The canoe almost went unsold but finally sold at the last moment possible when a bidder accepted the opening price.

Conversely the $40 starting bid for an 11-foot red Hobie kayak quickly escalated into a bidding war involving at least four bidders and ultimately selling for $600. A brand new 11-foot Hobie Mirage Revolution kayak, by comparison, would likely run about $2,000 at local retailers.

A bidder, who only went by the name of Paul, made it out to the March 18 boat auction in search of his first-ever kayak. Paul won the first auction of the morning, spending $200 for a 10-foot beige Hobie kayak. He also tried to purchase a 10-foot yellow Ocean kayak minutes later but ended up losing it to a higher bidder.

“I’m looking for a good value, something that’s half the price of what you normally find used,” Paul said moments after losing out on a second kayak.

Tom Nakashima, a sportsfisher, attended his first-ever boat auction on March 18 and perused the inventory for potential good buys.

“I’m looking for some sort of a deal,” Nakashima said. “I have two boats in my backyard. “I’m a boat guy. I like boats.”

What happens to unsold boats?

“For all the boats that are not sold at auction, Marine Group Boat Works submits a request for a junk slip to the California DMV,” Salgado said. “Once the DMV grants the junk slip the boats are demolished as is.”

Vessels not sold at Newport Beach’s boat auctions are also thrown away, according to Miller.

Buying a boat at an auction could be a good experience. The trick, as with any major purchase, is to be prepared and know what you are buying.

“Are there good deals available? There certainly are,” Costa said. “To come out ahead of the game is to do your homework.”

3 thoughts on “Boat auctions: Are they worth the trip?”