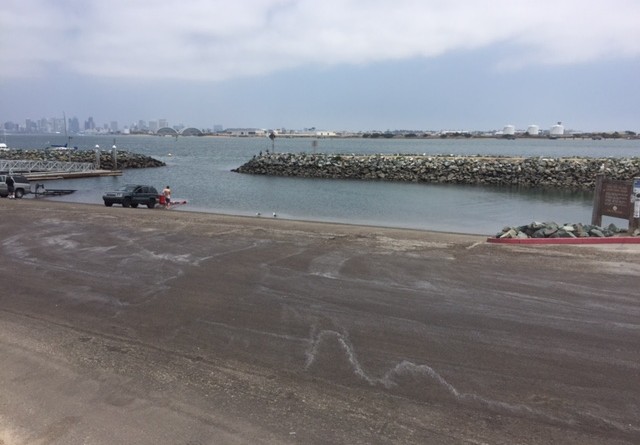 SAN DIEGO — Rare is the occasion where plans to rebuild a popular boat launch ramp becomes politicized and associated with a major campaign promise from the 2016 presidential election. Yet such a rare occasion occurred at the Port of San Diego’s Board of Port Commissioner’s April 11 meeting, where one commissioner balked at moving forward with a vendor because of its affiliation with the U.S.-Mexico border wall.

Castellanos was the only commissioner who opposed approval of the vendor contract – though one commissioner abstained and another was excused from voting.

The vendor contract was ultimately approved by a 4-1-2 vote, but not before Castellanos cautioned his colleagues about selecting a vendor associated with the border wall – especially in a city where local businesses and civic leaders foster regular relations with their Mexican counterparts.

“I was very disappointed to learn the lowest bidder to do the construction – which staff has recommended for award of the construction contract – has also bid on the construction of the proposed border wall,” Castellanos told his colleagues. “I’m not speaking out of turn when I say that the border wall will be extremely harmful to California’s economy, including that of the San Diego region.”

Mexico is the second largest market for U.S. exports and our third largest import partner, according to a study cited by Castellanos.

San Diego’s sportfishing fleet, which the commissioner stated is the world’s largest, also benefits from the region’s relationship with Mexico.

“Fishing in Mexican waters results in tens of millions of dollars in direct ticket sales by local companies,” Castellanos said.

The proposed border wall could also strain relations between Mexico and San Diego area leaders, according to Castellanos.

San Diego’s Chamber of Commerce, for example, hosts an annual trade mission to foster dialog and interaction between the city’s local and regional leaders and Mexico’s top business and government officials. The trade mission’s objective, according to Castellanos, is to promote unity between the United States and Mexico.

“Every year we go to convey a message of unity and our region’s acknowledgement that Mexico is an extremely important strategic partner,” Castellanos said.

The most recent delegation was led by nearly 100 members, including members of the San Diego City Council, a state legislator, a county supervisor and business leaders.

The commissioner was still supportive of the planned boat launch ramp renovation and believes it will benefit boaters who frequent the facility.

“This is the busiest boat launch in the state of California, with [more than] 50,000 boat launches a year,” Castellanos said. “It was originally built in the 1950s but hasn’t had a major improvement since the mid- 1970s. We are going to really improve this for the benefit of the public.”

California’s Division of Boating and Waterways as well as the Wildlife Conservation Board are funding the $9.6 million project.