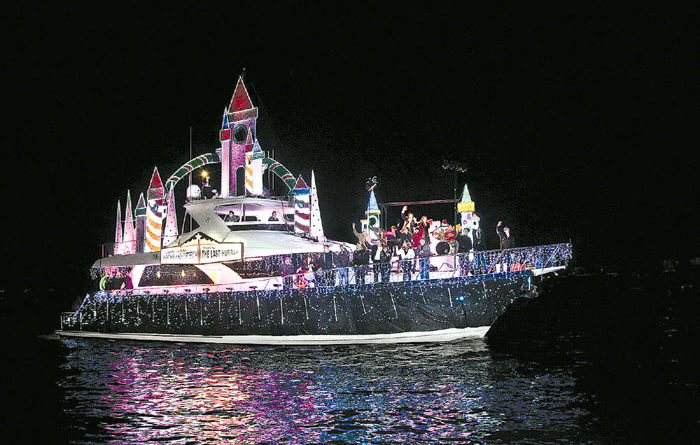 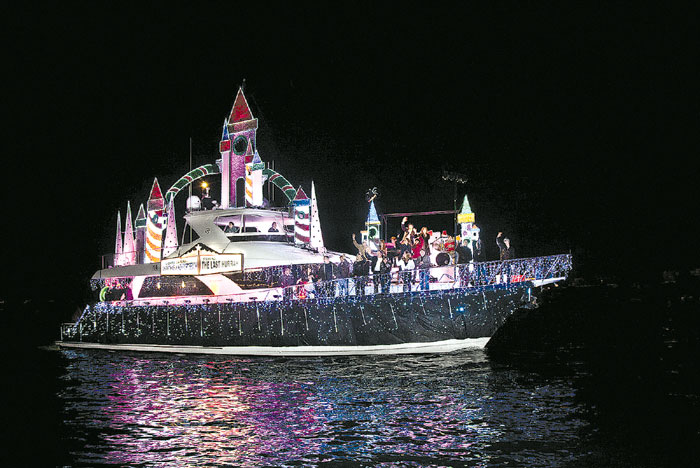 Holiday boat parades are a treasured tradition in Southern California — and some boaters spend all year getting ready for them. Bringing together the right holiday decorations, lights and onboard spirit to “wow” the crowds of fellow boaters on the water and spectators on shore takes planning, cleverness and a lot of creativity.

But even if you haven’t been obsessing over your decorating scheme since July, there’s still time to join in the fun of this month’s annual holiday boat parades. String some lights, bring along some friends and family, and make your plan now to take part in one of the season’s top boating activities.

Whether this is your first year heading out to join in the festivities on the water or it’s an annual outing, you’re sure to find something new and exciting to see and do. From participating in a decorated boat parade to checking out all the waterfront homes decked out for the holidays on a moonlight cruise, boaters have many opportunities to make the season bright.

Bring a thermos full of hot spiced cider, a plate of fresh-baked cookies — and friends. You and your family will enjoy a fun-filled evening on the water, and warm holiday memories to treasure forever.

SAN DIEGO COUNTY
San Diego Bay Parade of Lights
When: Dec. 9 and 16, 5:30-9:30 p.m.
Details: The Port of San Diego’s annual San Diego Bay Parade of Lights will begin with a fireworks display. More than 80 boaters will decorate their vessels to the theme of “Our 41st Anniversary, USS Santa Claus.” The parade will also serve as the official launch to the port’s 50th anniversary. A pre-parade event for the whole family is scheduled from 4-6 p.m. Dec. 9 at the Port Pavilion on Broadway Pier, 1000 North Harbor Drive. There will be a performance by the Navy Region Southwest Band, food trucks and craft-making activities for children — plus two inflatable bounce houses, a train ride, and a sleigh for photo opportunities.
Route: Boats will cruise from the south end of Shelter Island to the downtown waterfront and the Coronado area. The parade takes between one to one-and-a-half hours to complete.
Viewing: Spectators are reminded to arrive early, since parking at Harbor Island is available on a first-come, first-served basis. Boaters can get the best views where the parade turns west for Coronado, near the 10th Street Terminal. Less crowded shoreside viewing areas include the north and south ends of the Embarcadero, the bayside pathway along Coronado and the waterfront park behind Seaport Village. The port will provide bleachers to seat 250 in the Port Pavilion’s view court, as well as chairs for 400 people. Spectators can also bring their own chairs. Seating is first-come, first served. Paid parking will be available on a first-come, first-served basis at the B Street Cruise Ship Terminal for $10.
Information: sdparadeoflights.org

Mission Bay Christmas Boat Parade of Lights
When: Dec. 8, 7-9 p.m.
Details: More than 60,000 spectators at Mission Bay Park are expected to watch the boat parade, which has been cruising through the bay since the 1970s. The parade concludes with a fireworks display and the lighting of the SeaWorld Skytower Tree of Lights at 9 p.m.
Route: The parade begins at the Quivira Basin and follows a 5-mile route along the shore of Mission Bay.
Viewing: Best shoreside viewing spots include Crown Point, the east side of Vacation Island and the west side of Fiesta Island.
Information: (858) 488-0501.

Oceanside Harbor Christmas Boat Parade of Lights
When: Dec. 8, 7-9 p.m.
Details: Hosted by Oceanside Yacht Club, this is the parade’s 36th year. The decorated boat entry deadline is 1 p.m. Dec. 8. Entry forms are available at the club, at 1950 N. Harbor Drive. A skippers’ meeting will be held at 1:30 p.m. Judging and awards presentations are scheduled at the conclusion of the parade, at Oceanside YC.
Route: Boats will cruise along Oceanside’s inner harbor.
Viewing: Between the harbor beach and boat ramp area.
Information: (760) 722-5751

ORANGE COUNTY
Dana Point Parade of Lights
When: Dec. 7, 8, 14, 15, 7:30 p.m.
Details: The 38th annual Parade of Lights will carry the theme “Lights, Camera Action! — A Hollywood Holiday.” Boaters from throughout Orange County are expected to join the parade and compete for awards in a variety of categories.
Route: The parade route will begin at the harbor entrance. Boats will head north to the Embarcadero and turn around, go right to East Marina, turn around at the bridge, exit and head along the outside of the harbor before heading into West Marina, turn around at the bridge and head back toward the starting point.
Viewing: Anywhere in the harbor, for free. Reservations are required for viewing at local restaurants. Dana Wharf Sportfishing will offer boat rides at $25 per adult and $15 per child. Reservations can be made by calling (949) 496-5794.
Information: (949) 923-2255; danapointharbor.com

104th annual Newport Beach Christmas Boat Parade
When: Dec. 19-23, 6:30-9 p.m.
Details: Called “one of the top 10 holiday happenings in the nation” by the New York Times, the Newport Harbor Christmas Boat Parade will start nightly off Bay Island. This year’s theme is “Surf, Sand and Santa.” Fireworks, launched from the Balboa Pier, are scheduled at the end of the parade’s last night — beginning at 9 p.m. Dec. 23.
Route: The parade will start at the Bay Island channel. Parading boats will go around Balboa Island, north to the Upper Bay channel, west near Mariner’s Mile, around Lido Isle and alongside Balboa Boulevard, before heading back to the Bay Island channel. A map of the parade route is available online. Viewing: The best shoreside viewing spots are around the Balboa Fun Zone, where spectators can also catch a glimpse of the harbor’s decorated homes. Reserved seating is offered at a variety of places along the harbor, including American Legion Yacht Club and the Newport Sea Base. Charter boat operators are also taking reservations for parade night cruises. Local traffic is heavy on all parade nights and parking is extremely limited, so it is wise to show up early.
Information: Newport Beach Chamber of Commerce at (949) 729-4400; christmasboatparade.com

Huntington Harbour Boat Parade
When: Dec. 8-9, 5:15 p.m.
Details: The theme for the 50th annual parade is “Golden Memories: 50 Years of Music.” Boats of all sizes and types will participate. Boats will line up at 4:30 p.m.
Route: The parade route will run down the main channel of the harbor and loop back at the fuel dock. The complete route, skippers’ information and additional details are available at hhboatparade.org.
Viewing: Public beaches around the main channel edges of Trinidad, Humboldt and Davenport islands.
Information: hhboatparade.org

LOS ANGELES COUNTY
Naples Island Holiday Boat Parade, Long Beach
When: Dec. 15, 6 p.m.
Details: The 66th annual parade includes a unique theme — “A Holiday Salute to Our Olympians” — where boaters can pay tribute to the area’s homegrown Olympians.
Route: Large boats start at 6 p.m., and will assemble along Lido Lane off the seawall in front of Naples Plaza. The parade will begin at Naples Plaza Park and head west, where boats will turn around before the Second Street Bridge, then continued west before ending at Appian Way. Small boats start at 6:45 p.m. and will assemble in Marine Stadium. The parade will begin at the Appian Way Bridge and travel south along Bayshore Drive. The parade will enter Naples Canals through the main entrance in front of the Colonnade and travel clockwise around the main canal. Upon exiting, boats will finish in front of Long Beach Yacht Club.
Viewing: Any public area around Naples.
Information: naplesca.com

Long Beach Parade of 1,000 Lights
When: Dec. 8, 5:30 p.m.
Details: In its 30th year, the Parade of 1,000 Lights will feature a “Tropical Holidays” theme and an expanded parade route. There will be free chili, cornbread and hot dogs for all participants at 8:30 p.m. at the awards banquet following the parade.
Route: Boats will line up outside Shoreline Marina, move toward Island White, circle near the beach, move into and through Shoreline Marina and on to Rainbow Harbor past Parker’s Lighthouse Restaurant, Pine Avenue Pier and Gladstone’s, departing Rainbow Harbor and passing by Queen Mary.
Information: (562) 435-4093; shorelineyachtclub.com

King Harbor Christmas Boat Parade
When: Dec. 15, 5:30 p.m.
Details: Now in its 21st year, King Harbor’s boat parade will carry the theme “A Christmas Wish,” and it will be led by this year’s grand marshal, Bo Derek. Winners in this year’s event will have the opportunity to have their picture taken with the famous film actress. Proceeds from the parade will be shared with the King Harbor Youth Foundation, the Let’s Go Fishing Foundation and Sea Scouts Ship 618.
Route: The main channel of King Harbor. Viewing: Fisherman’s Pier, the seawall and all along the harbor, wherever there is a view to the main channel — from King Harbor Marina to the Redondo Beach Pier.
Information: (310) 376-2459; khyc.org

Marina del Rey Holiday Boat Parade
When: Dec. 8, 6 p.m.
Details: A half-century old and still going strong, this year’s 50th annual Holiday Boat Parade starts off with a fireworks show at 5:55 p.m., with the boat parade to immediately follow. Three-time Olympic Gold medalist beach volleyball player Kerri Walsh is this year’s grand marshal, and will be on hand to enjoy this year’s theme, “A Solid Gold Christmas.”
Route: The parade will cruise through the main channel of the harbor and circle at least three times. The south turn will be parallel to Pacific Avenue in Marina del Rey and the jetty bridge in Playa del Rey. The north turn will be at the end of “F” Basin. Viewing: Burton Chace Park and Fisherman’s Village.
Information: (310) 670-7130; mdrboatparade.org

VENTURA COUNTY
Channel Islands Harbor Parade of Lights
When: Dec. 8, 7 p.m.
Details: This year’s theme, “Holidays in Toyland,” will bring fun-filled decorating opportunities for boats participating in the 47th annual event. Prior to the parade, a full day of activities is planned starting with Snow Play at 10 a.m. at Harborview Park, and a visit from Santa and Mrs. Claus from 11 a.m.-3 p.m. Arts and crafts and food vendors will be on hand from noon to 7 p.m.
Route: Begins in front of Peninsula Park and heads to the Main Channel, turns at Hobie Beach, loops in front of the launch ramp, and then heads back to Pacific Corinthian Yacht Club, where the route repeats for a second run.
Viewing: Parks, walkways that line the route, most harbor restaurants and harbor charter cruise boats.
Information: (805) 382-3001; channelislandsharbor.org.

Ventura Harbor Parade of Lights
When: Dec. 14-15, 7 p.m.
Details: This year’s “Jingle Jungle” theme is expected to bring out the decorating wild side of participating boaters. Prior to the parade, a Winter Wonderland is scheduled to take over Ventura Harbor Village that will include visits by Santa and Mrs. Claus, a live reindeer, Victorian carolers, a toy soldier band, holiday characters and a craft station. A fireworks display is scheduled each night following the parade.
Route: Around the edge of the harbor near Spinnaker Drive.
Viewing: Anywhere in the harbor around Spinnaker and Navigator drives. The best views are from the promenade, harbor view restaurants or the water. Ventura Harbor Boat Rentals and Island Packers will offer public cruises.
Information: (805) 477-0470; venturaharborvillage.com

SANTA BARBARA COUNTY
Santa Barbara Parade of Lights
When: Dec. 9, 5:30 p.m.
Details: While the boats hit the parade route at 5:30 p.m., the festivities for the 27th annual event kick off at 3 p.m. at Santa’s Village on Stearns Wharf, where more than 10 tons of snow and holiday music await — along with a visit from Santa. Boats will be decorated to this year’s “Starry, Starry Night” theme, with a short fireworks display set to follow the parade.
Viewing: Stearns Wharf and the breakwater.
Information: (805) 897-2588