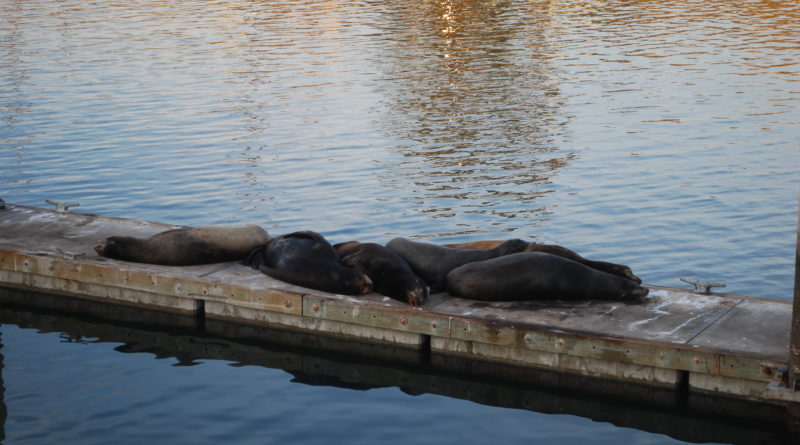 OXNARD — A liveaboard boater at Channel Islands Harbor in Oxnard claims they witnessed someone shooting at sea lions with an air rifle. The incident apparently occurred during the summer. The liveaboard, whose identity will be left unidentified, filed a claim with the Ventura County Harbor Department, stating liveaboard’s own vessel was struck several times by whatever projectiles were fired from the air rifle.

The Harbor Department confirmed an investigation was conducted but no wrongdoing was found.

“Yes, our Harbor Patrol investigated the alleged shooting,” Channel Islands Harbor Director Mark Sandoval told The Log in September. “We could find no evidence of the shooting.  [The person complaining] claimed there could be damage to her vessel below the water line, but we could not determine that without a vessel haul out.”

An official complaint filed with Harbor Department on July 24 and shared with The Log shows the liveaboard boater called in a report of someone shooting at sea lions.

“I thoroughly investigated [the liveaboard’s] boat, all surrounding boats and nearby docks for any damage or evidence of what had been discharged,” the Harbor Patrol officer continued in his report. “I found no damage to any property or evidence of pollutant entering the harbor. I found no blood or evidence of any marine life sustaining injury.”

Copies of the report were distributed to National Oceanic and Atmospheric Administration (NOAA) and Vintage Marina.

The Harbor Department also issued a warning notice to someone named Chad Tucker (the last name, as written on the notice, is not fully legible). The Log was unable to confirm whether the warning was issued to the same person who the liveaboard complained about.

A “Possible Animal Crimes” report was also filed with the Ventura County Sheriff’s Office. The report also referenced Tucker, claiming someone might have witnessed him shooting paintball rounds in the direction of sea lions. Tucker’s above-referenced warning was referenced in the Sheriff’s report.

The Log has covered this issue in the past, focusing on what boaters or anglers could or could not do in deterring pinnipeds from boats, docks and other waterfront areas. The existence of sea lions and seals in local harbors and marinas has consistently been a recurring problem – and this will be the subject of an upcoming feature story.

NOAA, in its October 2018 update of the “Deterring ‘Nuisance’ Pinnipeds” webpage, acknowledged the co-existence of sea lions and seals with humans is a growing issue.

“Since the passage of the Marine Mammal Protection Act (MMPA) in 1972, populations of California sea lions, Northern elephant seals, Northern fur seals, and Pacific harbor seals have increased dramatically, and are now considered healthy and robust,” NOAA’s webpage on marine mammals stated. “The increased abundance has been accompanied by a growing number of interactions with humans, raising concerns by private citizens and government officials who are seeking ways to protect property, fishing gear, and catch from damage by sea lions and seals.”

Federal law certainly protects pinnipeds from certain harassment or harm, but there are situations where deterrent measures can be implemented, according to NOAA.

“The MMPA generally prohibits the harassment, hunting, capturing, or killing of marine mammals, or any attempt to engage in such activities. However, the law does contain exceptions authorizing certain people under certain circumstances to deter marine mammals from damaging private property, including fishing gear and catch, so long as the methods used do not result in the death or serious injury of an animal,” NOAA stated on its marine mammals webpage.

“To reduce the risk of causing ‘serious injury’ to an animal, deterrence methods should be chosen that avoid penetration or tearing of skin, or rupture of an eye, and blunt force trauma that could cause broken bones or internal injury,” NOAA’s published statements continued.

Certain non-lethal deterrent measures can be implement in addressing sea lion nuisance, according to NOAA.

Methods to Avoid (Do Not Use)

2 thoughts on “Boater accused man of shooting at sea lions”