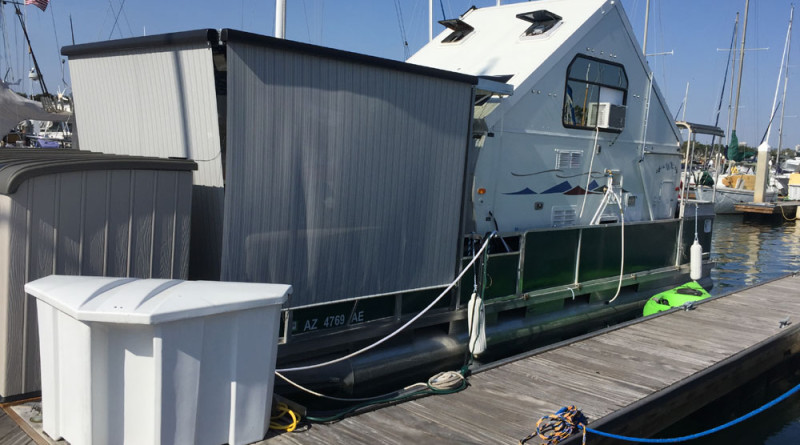 SAN DIEGO — One man purchases a trailer and is challenged by a friend to convert said trailer into a functional vessel. The owner of the trailer thinks, “hey, why not?” and accepts the challenge. Three years later, a friendly wager became Y-Knot? a 16-foot, 2,000-pound trailer attached to a pontoon and docked at Marina Cortez in San Diego.

Ron Miller, a semi-retired commercial pilot from Tucson, Arizona, bought a 2007 Chalet XL 1930 a few years ago and instantly fell in love with the trailer. He told his friend, an engineer, life would be perfect if he could somehow enjoy his trailer and be on the water at the same time. His friend responded with a friendly wager: Find a way to get the trailer to functionally operate on water or pay up $100. Miller accepted the bet.

What started as a seemingly innocent comment became a three-year project to place a 2,000-pound trailer onto the water.

“This whole thing came about one evening in my backyard, grilling burgers and drinking beers,” Miller said. “I had just bought the Chalet XL travel folding trailer. He was asking me how I liked it and I said, ‘Well, you know, it’s okay, but I’m not fond of dirt camping.’”

The friend suggested Miller buy a boat. Miller replied he probably would not use the boat often, since he lives in Tucson.

A wager was made moments later.

Miller started working on the trailer/boat hybrid in 2010 and completed Y-Knot? in 2013. Upon completion he drove Y-Knot? to his friend’s house, surprised him with the finished product and claimed his $100 prize.

“I originally built it for Lake Powell but it works equally well in San Diego harbor,” Miller said, adding he went onto Craig’s List to find a used pontoon. “Y-Knot? is a re-purposed 1988 Party Hut. It is 28 feet long and 8 feet wide. It was stripped down to the frame and pontoons and rebuilt specifically to mount the trailer, which can be loaded/unloaded from the front with 16 foot ramps. I built it this way so that it can be an ‘amphibian.’ It takes about half an hour to load/unload the trailer from the boat.”

The trailer-boat hybrid is Coast Guard-approved but designed to navigate flat waters.

“The boat is designed for flat water cruising only, even thought it carries a valid and dated Coast Guard Vessel Safety Inspection sticker it is not meant to be taken out to sea,” Miller said.

“The entire boat/trailer can be mounted on its own trailer and towed just about anywhere, then launched at a boat ramp,” Miller said. “[The trailer] is a hard sided folding trailer with an electrically raised/lowered roof for cruising or towing. The peak of the interior is 9 feet tall.  It’s held in place by two, 12,000-pound test (48,000-pounds breaking strength) nylon straps looped over the tires and secured with locking Grade 8 ratchets and wheel chocks bolted to the boat frame. The hitch is held to the deck with custom designed mounting bracket and pin.”

Another trailer-boat hybrid is in the works, according to Miller.

“Right now I’ve got plans for a new boat: It will have a brand new 25-foot Airstream trailer mounted on a 45 x 10 tritoon with 350 horsepower. It will be ocean going,” Miller said.

In the immediate future Miller plans to stay aboard Y-Knot? in San Diego until Labor Day weekend and then return to his home in Tucson.