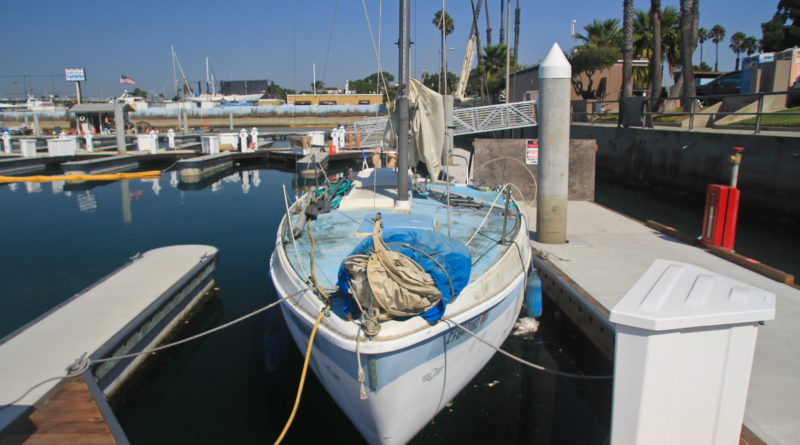 Boaters are expected to maintain their berthed vessels, but some say enforcement is lax.

Editor’s Note: This article has been updated since it’s original publication. A source directly associated with this story contacted the reporter with new information.

LONG BEACH ― Slip holders are expected to care for their vessels to ensure their boats remain in decent condition. However, some boaters have complained about the condition of certain boats berthed at one Long Beach marina.

The rules and regulations for the Long Beach marinas were updated in April, but are they being enforced? Some sources say they have not noticed the enforcement of rules.

A reader who wished to remain anonymous contacted The Log about one particular boat in Alamitos Bay Marina being in poor condition.

Alfredo Fernandez, communications director for Long Beach Marina Boat Owners Association’s (LBMBOA), said he had notified the Marine Bureau about that same boat when he, too, received a complaint.

Fernandez also mentioned another boat, in the same marina, is possibly in worse shape. The sailboat remains at a slip in the marina despite appearing abandoned and growing algae.

Ken Dixson, the owner of the sailboat pictured in this article, contacted The Log and admitted his boat was dirty, but said he planned to clean the vessel. Dickson added he preferred anyone who had an issue with the condition of his boat to approach him first, as opposed to complaining to marina staff or the city.

A vessel which is in a “state of deterioration” is considered to be one of the definitions of an “unseaworthy vessel,” according to the rules and regulations. “Any vessel determined to be unseaworthy shall be posted with a notice to repair or remove from the slip space.

“If the Permittee fails or refuses to repair or remove the vessel within 30 days…the Manager may cancel the slip permit…and impound such vessel at the Permittee’s expense,” the marina rules continue.

The Marine Bureau does issue warnings “when the boats start looking raggedy,” according to Fernandez. However, he said they do not enforce it.

“Even though they give people warnings, they never enforce the warnings,” Fernandez told The Log. “If you walk around the marina, you see some boats and wonder why they are here.”

Fernandez has noticed the Marine Bureau taking swift action when slip holders are in violation of their rental agreement.

“If the boat [owner] is late on payments, they get a notice. If they don’t pay within a two week period, then they impound the boat,” Fernandez relayed.

Fernandez says he is aware of what goes on, since he is a liveaboard in Alamitos Bay Marina and has been with LBMBOA since 2002.

Another board member of LBMBOA, Doug Dworski, has not observed any new action taken based on the amended rules.

“I have noticed no change in the enforcement of the Marina Rules and Regulations since the revised rules went into effect,” Dworski wrote in an email to The Log.

Dworski has a boat in the Shoreline Marina. He has not noticed any derelict boats in the downtown Long Beach marina.

Dworski says he does think a minimum standard for vessel appearance is being enforced, especially as they rebuild the marinas.

Boats get inspected to ensure they are in good condition and operable when they assume their new slips, according to Dworski.

Boats can be “subject to periodic ‘walk around’ inspections by Marine Bureau,” Dworski also mentioned. “Any discrepancies are brought to the attention of the boat owner by ‘red tags.’ As far as I know, this process was in effect under the old [rules and regulations] and remains in effect under the new [policies].”

LBMBOA was involved in updating the marina rules and regulations and welcomed feedback from boaters, according to Tom Mayes, Ph.D., president of LBMBOA and member of the Marine Advisory Commission in Long Beach.

“The BOA was involved in making the revisions before they were reviewed and approved by the Long Beach Marine Advisory Commission,” Mayes wrote in an email. “During the BOA review process, all slip holders were invited to provide their input about the changes proposed. Finally, the Long Beach City Council approved them at a recent Council meeting.”

The revised Long Beach Marina Rules and Regulations were adopted by the City Council on April 18.

Boaters were notified about the updated regulations through a marina newsletter in August.

“Notification to boaters about the approved changes was published in the August Marina Reader, the publication that is distributed to all slip holders in the Long Beach marinas,” Mayes confirmed.

The updated marina rules and regulations for Long Beach can be viewed online at bit.ly/2xyf2TL.

“Permittees shall maintain their vessels at an acceptable level of aesthetic condition, so not to detract from the overall slightly orderly condition of the marina,” the Long Beach Marina Rules and Regulations state.

“Your inquiry should be directed to Elvira Hallinan, Marine Bureau Manager,” Borsting responded.

The Log has not received a response from Hallinan by the time this issue went to press.

Having outdated forms can cause confusion and frustration among slip holders. Who are boaters suppose to contact with questions or concerns?

Boaters “come to me [with concerns or grievances]. Then we bring it up to the Board of Directors meeting monthly. We are pretty active with them, because our president is also a member of MAC and I also attend the MAC meetings and bring up the customer grievances there,” Fernandez stated. “They also go to the Marine Bureau.”

Contact information for all three marinas and marina supervisors are also available online at http://bit.ly/2pgGKDD.