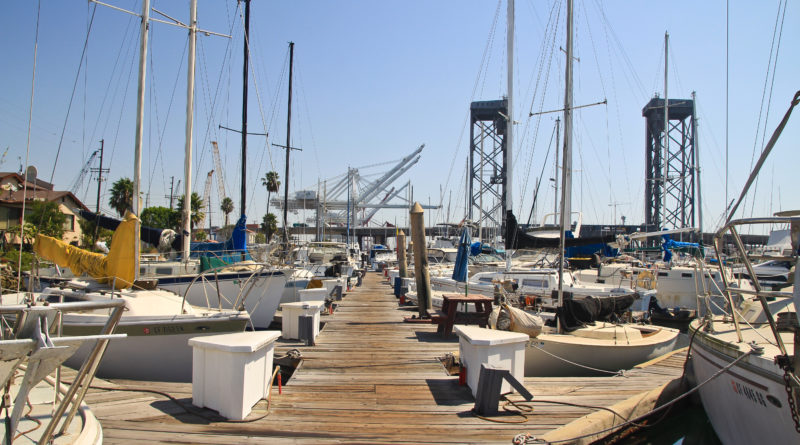 SOUTH BAY ― One would hope being on the coast and taking in the sea breeze would be a refreshing experience. How fresh is the air, however, for marinas situated in close proximity to major industrial ports?

Both Los Angeles and Long Beach port officials have been working together on updating the Clean Air Action Plan (CAAP) to eliminate emission pollution. The plan involves replacing vehicles’ diesel fuel with zero emission fuel. The ports’ goal is to have zero emission by 2035.

Virginia Valdez, sailboat owner in Wilmington, said some sort of clean air plan should have been in the works many years ago.

Los Angeles and Long Beach are the largest trade ports in the nation. The cargo vessels and vehicles frequenting these ports are only getting larger.

Port of Long Beach Executive Director Mario Cordero was quoted as saying ships are “more than doubling in size in the last decade and cargo traffic [is] breaking monthly records.”

Does this mean air quality is becoming worse? Are boaters and liveaboards, who are utilizing marinas near these ports, affected?

“After 20 years of being a liveaboard, I now have lung problems as do so many others,” Morgan Griffin, a L.A. Harbor liveaboard, stated.

Asthma and other respiratory problems are linked to air pollution from diesel engines, according to the Public Health Institute.

Exposure to diesel exhaust is a “substantial health risk” in regards to lung cancer, the American Cancer Society proclaims.

Will this plan benefit boaters and liveaboards in Long Beach, San Pedro and Wilmington?

Kevin Vu, who has a fleet of boats in Wilmington, doesn’t believe the plan will change anything.

Donna Ethington, a Wilmington liveaboard, said the plan does not take into account certain situational factors.

“While the CAAP recognizes the ports’ impacts to air quality in Wilmington and West Long Beach which, according to [a study] is still the worst in the South Coast Air Basin, it does not identify the causes or offer solutions because they are off-port impacts. And this does affect the boaters,” Ethington told The Log. “Emissions from idling trucks, vehicles and old equipment around the perimeter of the port complex are trapped by the marine layer that settles in the port complex during the night and morning hours for the better part of the year.

“The Wilmington marinas are in an industrial part of the harbor so we’re affected more by truck and train traffic,” Ethington also mentioned. “I can’t really speak for the San Pedro marinas, but I doubt they’re affected much by emissions because of the continual breeze in the outer harbor.”

Sage Marie, a sailboat owner in a San Pedro marina, questioned the air quality there.

“I observe quite a bit of what appears to be black soot/environmental fall-out accumulates on our boat on a weekly basis, which certainly leads me to question the air quality,” Marie wrote in an email to The Log.

A slip holder in Wilmington, Rainer, said he is mostly concerned about the ships and the soot they leave behind.

The CAAP addresses pollution from massive cargo ships as well. The plan provides incentives for ships to reduce their speed which results in less fuel burning as well requires ships to plug in at ports rather than let the engines run idle.

“I can tell you that after living and working in the Port of L.A. for 35 years, the air quality is significantly better than it was due to the Clean Trucks program, replacement of yard equipment, tug and locomotive engines, and Alternative Maritime Power (AMP) at most of the big terminals where ships plug into shore power rather than running their generators while at berth,” Ethington conveyed.

Rainer said the cargo ships in Wilmington are not plugging into the shore power as they should.

“The ships I can see right now, they don’t plug in,” Rainer stated. “My concern is more on the dirt that it makes on the boat.”

Are the Los Angeles and Long Beach port officials putting any requirements on yacht clubs, charters or recreational boaters?

“All the marinas and yacht clubs in the Port of L.A. combined occupy less than 2 percent of the Port’s total 7,500 acres of land and water and do not have a significant impact on air quality,” Ethington relayed. “However, the Port of L.A. does have a Marine Engine Exchange Program that pays a boat owner up to $2,000 toward the replacement of a running four-stroke gas outboard with a new less polluting outboard. This has been a pretty popular program.

“The Port is more concerned about boaters’ potential impact on water quality,” Ethington continued. “Marinas have to comply with their Port Master Lease and to be certified under the Clean Marinas Program, so the rules and regulations included in the boaters’ contracts are specific relative to boat maintenance, marine holding tanks, bilge pumps, fueling at the dock, pet waste, etc.”

Water quality appears to be good, according to Marie, in San Pedro.

“For what it’s worth, the amount of marine life I observe makes me think the water quality is okay. Our marina is teaming with rays of various kinds and many other fish, birds and mammals,” Marie stated.

Dave Mark, commodore of San Pedro Yacht Club in Wilmington, said air quality at the L.A. Harbor area is not much of an issue.

“Our air quality is very good [with] electric trains and propane trucks,” Mark said, “We are down wind at our marina of a ship loading dock that sends scrap steel to China, so we do get metal in the air that lands on our boats and rust.”

William Hobe has a boat berthed in Wilmington and has been living on his boat for 25 years. He is not bothered by the sully air. In fact, he believes the air and water quality have improved over the years.

“I live here in a working boatyard, so the air is perpetually dusty here,” Hobe continued. “This is a very highly industrialized [area]. If you don’t like the steel trees, you better not be here.”

An updated draft of the CAAP was released to the public on July 19. A CAAP workshop was held on Aug. 30 for the public to provide verbal feedback.

The public has until 5 p.m. on Sept. 18 to submit written comments via email to CAAP@cleanairactionplan.org.

Harbor Commissions for both ports will review a final draft of the plan in November.