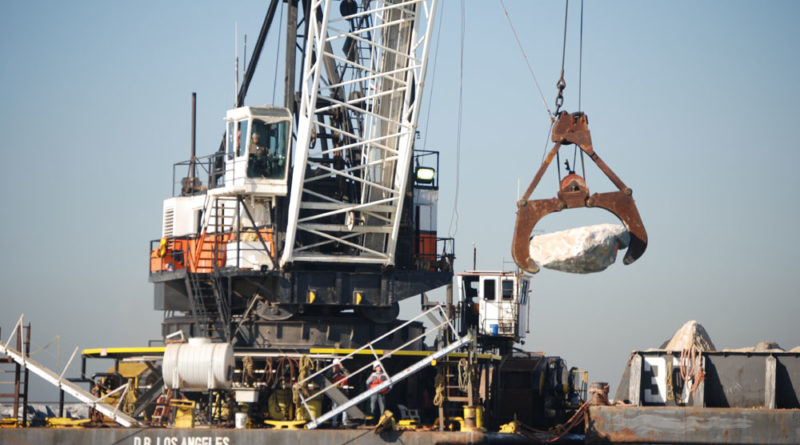 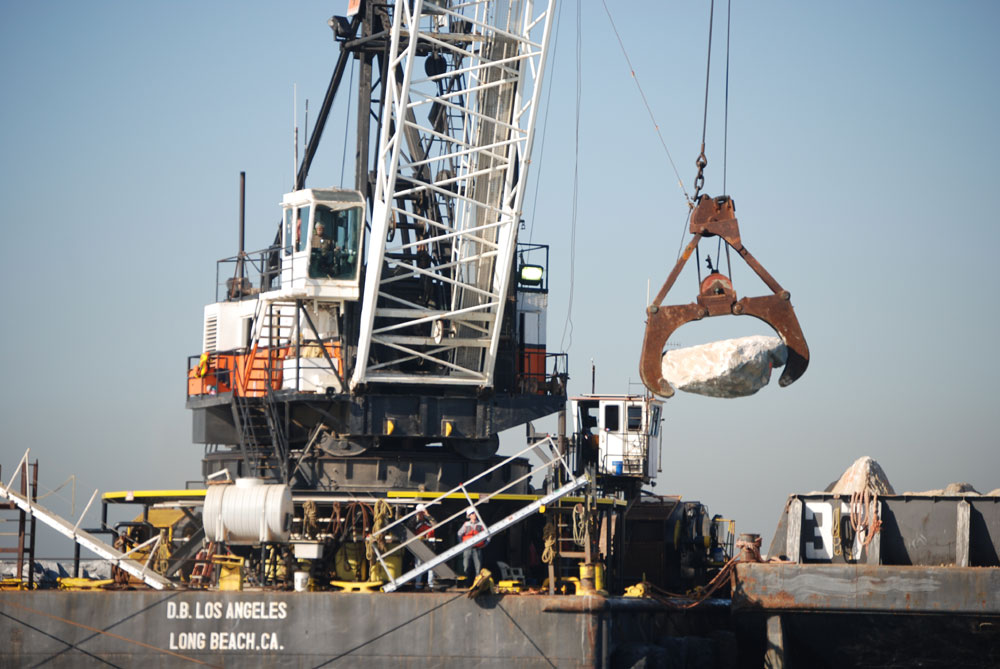 LOS ANGELES – Construction on the three breakwaters protecting the Port of Los Angeles- Long Beach is officially underway, according to the Army Corps of Engineers. Repairs on the Middle Breakwater, which was damaged by “heavy waves” hitting them during Hurricane Marie, are expected to be completed by late December, “barring unforeseen circumstances.”

Connolly-Pacific Co. was awarded a $5 million contract by the U.S. Army on Sept. 18. Repair work began on Oct. 8.

The contract authorized work to be done within 90 days. Repairs are being made to the 12 “most severely sections of the three breakwaters damaged by heavy seas from Hurricane Marie,” according to the Army Corps.

Between 20,000 and 30,000 tons of rock acquired from Catalina Island’s Pebbly Beach quarry were expected to be used to fill gaps in areas most damaged by Hurricane Marie, according to Jim Fields, a project manager with the Army Corps.

Fields added each rock weighs between 8 and 15 tons. A crane takes a rock from a barge and places it into its appropriate place along a breakwater. The placement is based upon the rock’s size and shape, according to Fields. The crane operator and a spotter helps place each rock into its respective place and ensure it individually fits in place.

“The repairs are coming along well, with the contractor providing quality work. It’s a good initial step to repairing the damage to the breakwaters. These repairs will afford significantly improved protection for the ports,” said Fields, adding while each breakwater was still functional after the hurricane, the functionality would decrease with each significant wave or storm event in the area.

According to Greg Fuderer, public affairs specialist with the Army Corps, repairs are currently being made in two locations: Middle Breakwater and the lighthouse at the head of the San Pedro Breakwater.

Repairs are taking place after hurricane season, which traditionally ends Nov. 1, though Hurricane Vance off the Baja California coast was at its peak Nov. 3 and 4.

Work is currently being performed in areas most significantly damaged and poses high risk to the port.

“Specifically three breaches in the breakwater are being repaired and should be completed in the coming weeks. These constitute to major damage areas and the greatest risk to port operations. The overall repairs to damage to all three breakwaters (San Pedro, Middle and Long Beach) will exceed the $5 million contract,” said Douglas A. Thiessen, managing director of the Port of Long Beach’s Engineering Bureau.

Thiessen added he and senior staff from the U.S. Army’s Los Angeles district will be meeting to discuss follow-up work.

The Middle Breakwater, which is located at the western edge of the Port of Long Beach, is one of three breakwaters in Los Angeles-Long Beach Harbor that sustained “major damage” by residual waves of Hurricane Marie, a Category 5 tropical cyclone, between Aug. 26 and 30. It was the hardest hit of the three breakwaters, according to the Army Corps.

The rock formation is directly in front of the Port of Long Beach and protects it from the Pacific Ocean.

After an inspection by coastal engineers immediately after Hurricane Marie, it was determined the structural integrity of all three breakwaters had been compromised.

In September, the Army Corps reported to The Log repairs for Middle Breakwater alone could cost at least $20 million.

During a Board of Harbor Commissioners meeting in mid-September, officials estimated repairs would be expensive because of the difficulty in accessing the breakwater, as it essentially an island with no convenient access to land and would require the use of cranes and rock barges.

The breakwaters were described by the Board of Harbor Commissioners as necessary infrastructure preventing heavy winter storms from damaging port infrastructure and flooding local streets.

As Thiessen noted, the final repair bill will exceed the initial $5 million contract awarded to Connolly-Pacific, though how much money would be required to fix all three breakwaters has not yet been determined.

Jon Slangerup, chief executive of the Port of Long Beach, said the three breakwaters help maintain vessel operations and provide a safe harbor for both his waterfront facility and the neighboring Port of Los Angeles.

The Army Corps anticipate construction would result in minor impacts to water quality and temporary disturbances to marine life. However, the Army Corps said such impacts would be short-term.