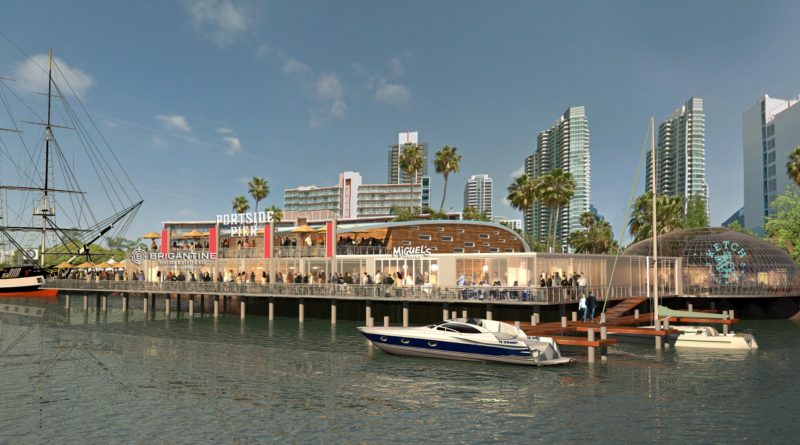 SAN DIEGO — Plans to redevelop a portion of the San Diego waterfront with a new restaurant space took a significant step forward, Oct. 10, as the Port of San Diego’s Board of Port Commissioners unanimously approved a 40-year lease for The Brigantine and its Portside Pier project.

Port district staff negotiated a 40-year lease with The Brigantine to operate the new dining venue.

The dock-and-dine will be one of the open-to-the-public amenities associated with the planned Portside Pier project; a second level viewing deck and perimeter walkway are the other two public features.

A combination of public-serving amenities and multiple restaurant properties in one location made The Brigantine an attractive developer-operator for the port district’s waterfront redevelopment plans.

“As a successful local family restaurant developer and operator, Brigantine demonstrates the best balance of activating the [former Anthony’s] location through increased public access as well as maximizing revenues to the [port] district,” port district staff stated in a report to commissioners.

Other rent stipulations include a five percent assessment on food and beverage, and 5.5 to six percent revenue sharing on gross sales.

Construction is expected to begin in early 2018, shortly after demolition work at the old Anthony’s site is completed. Port district staff estimated construction work would be done in about 12 months.

The Brigantine has been developing and operating restaurants in the San Diego area since 1969, according to a port district staff report. Some of its properties include Brigantine Seafood and Oyster Bar and Miguel’s Cocina.

“Brigantine has a proven track record as a strong operator that has redeveloped and rebranded underperforming restaurant locations, and they continue to reinvest $2 to $3 million in their restaurants each year,” port district staff stated in a report to commissioners. “They also have a strong management team with [more than] 20 years of experience and diverse backgrounds. Most notably, Mike Morton Jr., CEO of Brigantine, was named Restaurateur of the Year by the San Diego County Chapter of the California Restaurant Association.”

Commissioners selected The Brigantine as the developer to update a portion of the downtown waterfront in 2015.

The Brigantine is also redeveloping Red Sails Inn, the former home of The Log, into a modern restaurant concept.