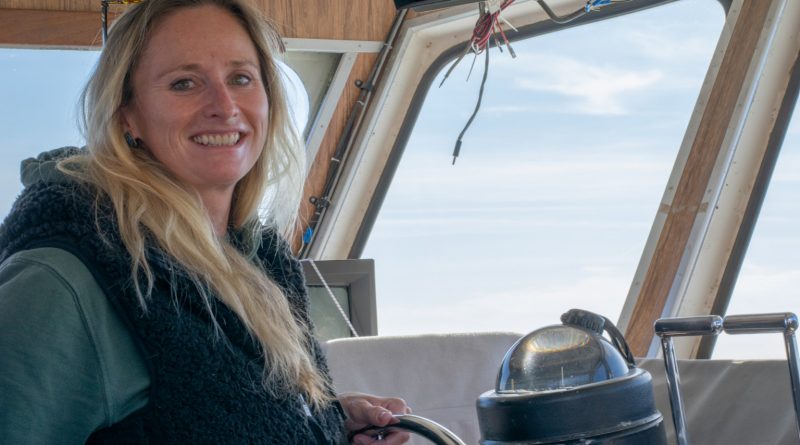 Loust started at Ocean Institute in January 2008 as a science instructor and after being mentored by the captains of the Research Vessel Sea Explorer, she was inspired to get her own U.S. Coast Guard Master 100 Gross Tons License.

DANA POINT—Brittany Loust has seen a pod of orcas, many whales, dolphins and other marine life out on the ocean in her life-long career in marine science. She said those sightings are just the icing on the cake in her job at the Ocean Institute in Dana Point working on the Research Vessel Sea Explorer (RVSE), now as the first female captain. The cake, she said, is watching young children come aboard the vessel a little nervous but disembark comparing the trip to Disney Land.

“You get those comments and I think that’s such a rewarding experience,” Loust said.

Loust, who has worked for Ocean Institute for 13 years, recently became the first female captain of Sea Explorer, which is used by the ocean education organization for whale watching tours, kids programs, school programs and more. RVSE serves as a sort of floating science lab, with the educational trips including collecting and looking at plankton samples and collecting and sorting through mud grabs for invertebrates and other critters.

Loust said it’s humbling, exciting and a little terrifying to be the first female captain in RVSE’s roughly 25-year history.

“We’ve done so much here at the Ocean Institute for women in science,” Loust said.

That includes an annual conference for middle and high school girls called Girls in Ocean Science, which aims to connect influential, female scientists with the next generation of ocean ambassadors.

“It’ll be cool to have a female captain when we take all these young girls out on the boat,” Loust said, going on to say she felt honored that person would be her.

Loust said she knew in the fifth grade she wanted to study marine biology. She grew up in Dana Point and went on to get a degree in marine science from University of Hawaii before returning to the area. She started at Ocean Institute as a science instructor and a few years later became a Floating Lab Scientist on RVSE, serving as the lead deckhand to the captain and running the programs on board. She said when she first started working on the vessel, besides the captains, a majority of the crew were female.

“It was all kind of inspiring,” Loust said.

She then moved to a program coordinator role before deciding to get a U.S. Coast Guard Master 100 Gross Tons License around January of last year. Loust said she was inspired by other captains of the vessel and encouraged that she could do it by her husband, who also got his captain’s license. She said one of her long-term goals is to run a boat with her husband offering ecologically-friendly fishing and scientific trips.

“Knowing that I can do it and having people kind of push me and inspire me to reach for that goal,” Loust said.

She said she was particularly inspired by the head captain’s passion for the mission of Ocean Institute, which is to use the ocean as a classroom and inspire children to learn.

“For me, coming from a science background, I really appreciated putting a little more effort into it than just here’s a whale and this is cool, but really giving people a little more of that experience and that educational part of it,” Loust said.

RVSE has been docked for the past several months due to state and county regulations related to the coronavirus. Once given the greenlight to resume operations, Loust will take her first trip as captain.