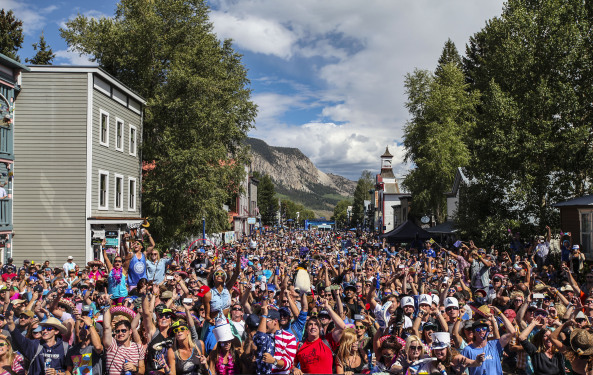 AVALON — Summer is around the corner and the recreational boating season is picking up, which means Avalon Harbor will be brimming with tourists and visitors for the next few months. However, Avalon will temporarily become a tourist destination of a different kind at the end of this month as Bud Light converts the small city into Whatever Town, USA.

Budweiser is bringing its #UpForWhatever campaign to Catalina Island, converting Avalon into a fake beer-themed town themed after a staged question asked to a seemingly innocent bar patron during a Super Bowl commercial in 2014: “Are you up for whatever?” Avalon will receive a financial boost for effectively hosting a three-day commercial shoot, but some residents and visitors ponder how the event will impact them, both during and after Budweiser’s visit.

The campaign involves a complete takeover of Avalon between May 29 and 31 to promote Bud Light and continue the St. Louis-based distiller’s nationally broadcast commercial, where Budweiser shares with audiences its ability to transform a town into a destination where people have fun because of the company’s beer line.

Crested Butte, a small Colorado town in the Rockies and home to about 1,500 residents, hosted the first-ever Whatever, USA, in September 2014. About 150,000 submitted auditions for the Crested Butte takeover, according to Anheuser Busch; only 1,000 of those applicants were reportedly allowed into the fictional locale, which included the town literally being painted blue.

Similar to Crested Butte, Anheuser Bush will fly and boat about 1,000 people into Avalon to fill closed-off streets and participate in what Budweiser describes as a “destination for an epic weekend of unexpected fun.”

According to Budweiser, Crested Butte received $500,000 for hosting the multiday event, twice as much as originally offered. Whether Avalon will receive the same amount of money for hosting the Budweiser takeover this month has not yet been confirmed.

Crested Butte Mayor Aaron Huckstep said a few residents expressed concerns leading up to the event, but most were supportive of Budweiser’s three-day takeover. However, due to security concerns, Anheuser Busch did not allow all locals to participate in the weekend-long event, which covered three square blocks in the heart of Crested Butte.

Huckstep reported there were no emergencies spawning from the event and the cleanup was mostly speedy. The city is still, to this day, still trying to remove the blue paint from Elk Avenue. Huckstep said work on Elk Avenue cannot be completed until summer weather arrives.

Beyond the $500,000 payment, town officials did not measure the direct financial impact of #UpForWhatever. The town’s sales tax revenue was at a record high in 2014, Huckstep said, adding while the Budweiser event was not fully responsible for the increase it certainly helped.

Anheuser Busch reported the three-day event added more than 250 temporary jobs and about $1 million in revenue to the Crested Butte economy.

“Every event like this comes with bumps and bruises. If you can improvise on the ground, hopefully everyone can have a good time,” Huckstep said.

“There were some vocal complainers, but in a town with a whole lot of events Whatever won the newspaper’s vote for Best Event of the Year,” Norton said. “Anheuser took great pains to make sure businesses were at least made whole with spending.”

The CBS affiliate in Denver reported the faux town featured elements not native to Crested Butte and built just for the weekend event, such as a sand volleyball court, a six-person director’s chair and a cowboy boot statute measuring several stories high.

“In exchange for a $500,000 deposit in the town coffers, Anheuser-Busch (literally) painted my town blue for the weekend, throwing a two-day rager for some 1,000 out-of-town contest winners who earned their invitations by proving that they were ‘up for whatever,’” Lynn wrote in the September 2014 article. “The set was the main street of our quaint, historic, mining town turned ski destination (population: 1,500; elevation: 8,800 feet). For two days, my fellow Buttians and I were officially citizens of a promotional event. It was time to embrace and indulge.”

About 1,000 miles away, Orange County resident Ted Olsen said he and fellow boaters are concerned with how Bud Light’s takeover of Catalina’s only incorporated city would impact locals and visitors. Among his concerns include the timing of the event and whether enough information will be made available for boaters and anglers to properly prepare for the weekend.

“I don’t see any positive side. In Catalina, this is the beginning of the high travel season,” the frequent Avalon visitor said, pointing out the event in Crested Butte occurred at the end of summer, not the beginning. “It has put a damper on our weekend.”

Harbormaster Brian Bray said final details of the #UpForWhatever event are still being worked out but plans are being made to accommodate the increase in visitor traffic between May 29 and 31.

“All pier dinghy docks will be set up for temporary use between the Yacht Club and Tuna Club. Loading floats on the Green Pier will be removed. All visiting traffic that normally uses the Green Pier floats will be directed to load/unload on floats at the Cabrillo Mole. The showers will still be open,” Bray said.

Anheuser Busch and city officials have not yet decided whether they will paint the Green Pleasure Pier blue for the event.

“Up for Whatever has considered painting the Pleasure Pier blue but as of now, the decision to do so has not been made,” Jordan Monroe of Avalon’s city manager office said. “If the decision is to move forward, only the green buildings on the pier would be painted blue for the event and then would be restored back to the original Pleasure Pier Green. Paint will be disposed of in a proper manner. Many of the windows on the buildings in the two block section along Crescent Street will be branded with vinyl decals that will be removed after the event.”

Monroe added Catalina Express will operate normal boat departures, though some trips are already sold out. Catalina Flyer and Island Express Helicopters will also be operating as normal.

Emergency services will be “staffed and prepared in accordance with the scope of the event,” according to Monroe.

A representative on behalf of Bud Light provided some specifics of how downtown Avalon and the harbor area will be impacted by the event.

“Visitors will have access to all of the businesses on the island with the exception of those in the main event area,” Ryan Eichler said on behalf of Bud Light. “Roughly 75 percent of Bud Light’s activities will be in the downtown area, also known as ‘The District,’ along Crescent Avenue (Front Street), from the Green Pleasure Pier (and including the pier itself) to Metropole Avenue, including the pedestrian walkways on Catalina Avenue, Sumner Avenue, and Middle Beach. From Friday, May 29, at 3:30 p.m. to Sunday, May 31, at 2 p.m., access to the Whatever, USA will only be allowed to those with valid wristbands.”

More information will be posted at CatalinaChamber.com/ufw as it becomes available.

In a formal statement, Anheuser Busch added Catalina was “no stranger to spontaneous fun” because of its bison population and connection to Hollywood’s Golden Era.