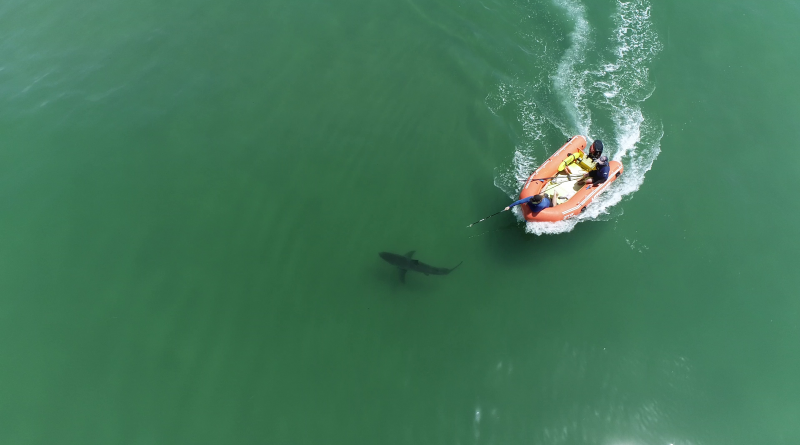 The California State University, Long Beach Shark Lab has been working in conjunction with California lifeguards to tag great white sharks to learn more about their patterns.

LONG BEACH一In 2020 the California State University, Long Beach Shark Lab tagged a record number of 53 great white sharks off the coast of Southern California. The lab worked closely with lifeguards up and down the coast to tag the sharks and record information they are hoping will assist in predicting the shark’s behaviors later down the line.

Shark Lab Director Dr. Chris Lowe and his team have been observing the juveniles in the Northeast Pacific great white shark population, encompassing as far north as Alaska and as far south as Mexico, who utilize the Southern California coast as a nursery. 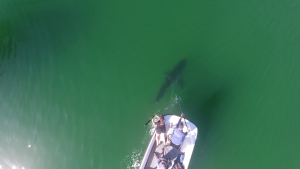 Great white sharks are born off the California coast and average between 4 to 5-feet in length, the sharks are considered adults when the males reach 11 to 12-feet in length and the females reach about 12-feet, which can take over a decade. These juveniles spend their time hanging out around the Southern California and Mexico shoreline right past the surf break. Lowe’s hypothesis is that the sharks feel safe in the shallows and have an abundant food source from the rays that hang off the coast.

With the sharks right off the surf break, it often puts them closer to people, which can be dangerous for both.

“We now work with all the lifeguards in California because when white sharks show up at their beach, they are responsible for keeping the public safe… So, we give them information [and] they work with us,” said Lowe.

One of the new ways Lowe and his team tag sharks in conjunction with lifeguards are by using jet skis. A grad student climbs on the back of a lifeguard jet ski, rides up next to the shark, and darts them in the back 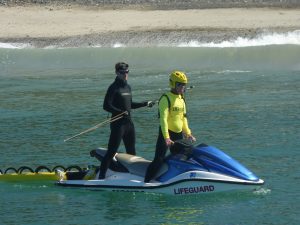 with the transmitter. Lowe’s team will use drones or helicopters to spot the shark and determine coordinates as well as size, they also have an underwater camera they use to determine gender and other visual markers on the shark.

“We have a variety of techniques depending on the beach, depending on what the lifeguards have regarding boats or jet skis,” said Lowe. “You know we are working along surf-ridden beaches we have to be careful of people, and it is a dangerous place to be operating that’s why it is so important that we work closely with the lifeguards.”

Lowe is hoping that by learning more about the great white shark population scientists will be able to predict their behavior in the future and create a safer environment on the beaches for sharks and for people.

Lowe said it takes consecutive years of research to determine which beaches and conditions appeal to the sharks to make them hang out on certain parts of the coast.

“Normally shark season starts in April and goes to November, climate change has definitely affected that pattern,” said Lowe. “We see more sharks sticking around during winter because for the last eight years or so our winters have been milder.”

The team also spends a great deal of time educating the public about marine life and is hoping to reopen their Shark Shacks, informational booths set up by students, once COVID restrictions lift over the summer. To learn more, see the CSULB Shark Lab website:  https://www.csulb.edu/shark-lab.