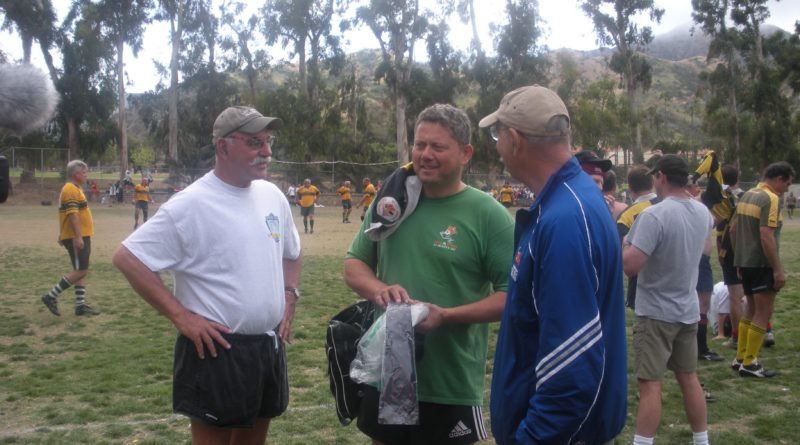 Organizer Tom Hendrix shares how his identical twin brother, Joe, began the festival as well as what makes this festival so unique.

CATALINA ISLAND—Some Americans may not even know what rugby is, but on Catalina Island you might say the British sport is king. For the past 27 years, the island has hosted the annual Rugby Festival, which took place on May 4.

Rugby is commonly believed to have originated in 1823 at Rugby School in England when a student named William Web Ellis decided to make up his own rules for soccer (called football in the United Kingdom). At Rugby School, a stone laid into a wall commemorates this event, reading Ellis had “a fine disregard for the rules of football” and “first took the ball in his arms and ran with it, thus originating the distinctive feature of the rugby game.”

Though rugby began in Great Britain, it has since become popular in other regions like France, South Africa and – where it is most popular today – New Zealand.

Rugby, in many ways, is similar to American Football. The sport is also known for its rough and tumble gaming (which consequently does result in serious injuries at times), but is also becoming more and more popular in America. Los Angeles Rugby Club, a sponsor of Catalina Island’s Rugby Festival, states it has “contributed extensively to the development of the game of Rugby Union Football on the Pacific Coast and the USA.” L.A. Rugby Club was established in 1958 and has organized a wealth of teams for all ages and skill sets.

Catalina Island has hosted the Rugby Festival since 1992, when Joe Hendrix, who was on the board for Southern California Rugby Football Union (SCRFU), started the event.  Sadly, Joe passed away and now his identical twin brother Tom Hendrix organizes the event.

Tom told The Log in an email, “Joe in 2000 was diagnosed with non-Hodgkin’s lymphoma and with the Cancer Support Community of Redondo Beach had an 11-year battle with his illness. Consequently, that’s when Joe started raising funds for both Cancer Support and the Los Angeles Rugby Club. Joe passed away in 2011 and that’s when I took over the event.”

Joe, as a board member of SCRFU, was in charge of incoming tours and the Old Boy, a team once dedicated to men 35 years and older, but is now 40 and older. According to Tom, Catalina’s Festival has always been an Old Boys event.

“The reason for that move [in age] was to make it more competitive for older players,” said Tom. “All entrants are guaranteed 3rd place hence No Championship. There are 3 rounds of games. The first round the matches are 40 minutes. At the conclusion of the first round there is a 40-minute match of two teams 50 years and older. Usually the 50+ players are closer to 60ish. Then the 2nd and 3rd rounds are guaranteed 40-minute matches however that is negotiable.”

Tom says that often times each match is around 30 minutes; sometimes later in the day the match times are reduced to 20 minutes.

Some might wonder about the numbers, but Catalina Island Rugby Festival is by no means a small event. Tom estimates 500 or more people head to the Island to play in or watch the competitions.

“I had a player from Georgia who was a visiting player with Old Southwest from Arizona,” Tom said. “He told me he was so impressed with what he saw will be back next year with his local team. One of the original teams from the 1990s is the Ancient Aztecs from San Diego. They usually bring up to 75 people.”

Just as rugby is quite the international game, Catalina Island Rugby Festival draws competitors from many areas of the world.

“This year there were two players with the Berkeley Old Boys who flew in from Mexico City and two visitors of mine personally from Brisbane, Australia and Auckland, New Zealand,” Tom continued.

On top of that, Tom said that he expects next year in 2020 there will be “a strong opportunity” two women’s teams will enter to play each other.

While the event certainly becomes quite competitive, Tom shares it’s more for the fun of the sport and not the formal scores of the game that matter.

“As for a score, I am not sure this year our format scores matter with no championship … I would say Sin City Irish (Las Vegas) and The Axemen from Sacramento were dominate this year.”

For more information about the Catalina Island Rugby Festival, visit the website at catalinarugby.org or Facebook (catalinarugby).