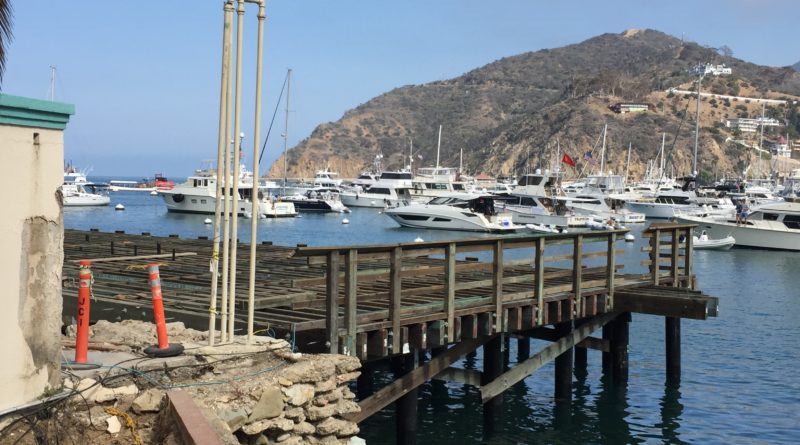 Story update (April 5, 2018): Avalon City Council held a meeting on Tuesday night, April 3 with a continued discussion of allowing food trucks at the Casino Fuel Dock station. Community Services Director, Dan Huncke, said due to complications of health and safety matters, a food truck or temporary restaurant cannot be immediately allowed. Amanda Cook, Planning Director, stated that she had a conversation with staff of California Coastal Community and it could be a possibility to apply for an exemption permit approval request keeping the idea a possibility in the future. Interim City Manager, Denise Radde, reaffirmed she is still in open talks with Catalina Island Company to secure a finalized lease deal to construct a permanent restaurant in the future. Other temporary options for Casino Fuel Dock were presented such as obtaining a street vending permit, posting signage with food delivery listings, and placing benches and trash receptacles at the site for the time being. At this time, more research and information will need to be gathered to determine the next steps. Follow The Log’s coverage as this story continues to develop.

AVALON— The city of Avalon continues to push ahead for a resolution of what to do with the space where the restaurant once stood. Summer, a busy time for Catalina Island, is coming soon. The option of constructing a permanent restaurant by the Casino Fuel Dock is on the horizon. Avalon’s City Council members, accordingly, have turned to deliberating on non-permanent options.

The process to find a dining solution at the fuel dock area was once called “exhausting, confusing and endlessly frustrating” by the former Casino Dock Café owners.

Council members, nonetheless, opened up discussions for a short-term solution to a long-term problem that has, according to Councilmember Joe Sampson, been plaguing Catalina Islanders for decades.

A brainstorming session at the March 20 meeting resulted in a few ideas, such as allowing caterers or food trucks to rent the space at Casino Fuel Dock or opening the area to the public with picnic tables. Council members stated the overarching goal was to have a permanent restaurant placed at the location. Three negotiations are currently pending.

Sampson mentioned there are also tensions between Catalina Island Company, as lease agreements had not come through. There appeared to be an expectation, however: the rent would possibly increase from $70,000 to between $135,000 and $138,000, beginning July 1.

Noticeably annoyed by the situation, Sampson stated, “Catalina Island Company is holding the community hostage…. People are bummed out and it is causing a lot of anxiety. All the restaurants are shutting down. A $138,000 lease — who can afford that? This is on the backs of the people and they don’t want to deal with it anymore.”

Denise Radde stated she had been in contact with the CEO of Catalina Island Company, Randy Herrel, and she was confident the situation could be resolved. Radde was not available to comment on the matter as of press time.

Council members ultimately decided to entertain the notion of temporarily parking one or two food trucks on the pads while putting more pressure on the Catalina Island Company in the future, so a more permanent solution can be reached.

Radde, at the closing of the meeting, asked council members to create a “thorough, thought-through plan,” including liability, safety and regulations and other regulatory information concerning placing the food trucks by the next meeting.