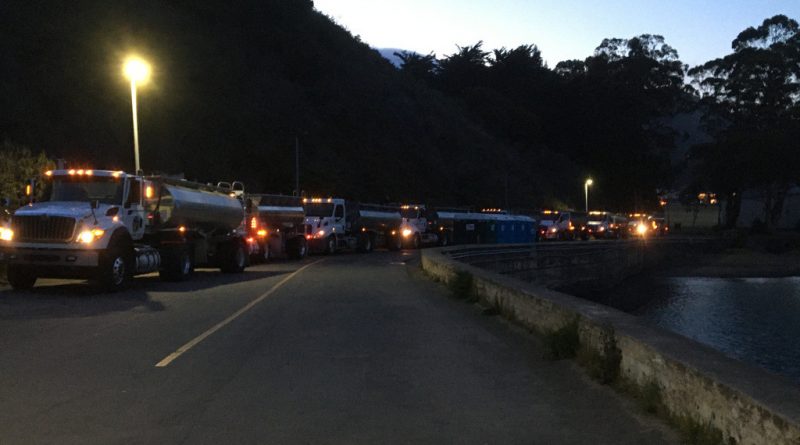 The California Department of Fish and Wildlife will be trucking salmon smolts from California hatcheries to the ocean to bypass poor river conditions.

NORTHERN, CALIFORNIA一 On April 28 the California Department of Fish and Wildlife announced that they were “taking the proactive measure” by trucking millions of hatchery-raised salmon to several ocean release locations.

“What we are doing is taking and trucking from four different hatcheries approximately 17 million salmon smolts…we are moving them from the hatcheries to the main bay,” said Harry Morse, public information officer for the California Department of Fish and Wildlife. “The idea is to bypass poor river conditions so these fish have a higher chance of survival… by cutting out that segment of the hazardous journey.”

Poor river conditions include high temperatures and poor water flow that can leave the salmon vulnerable to predators and have the potential for the fish to be lost or stuck in little back endings, according to Morse.

By bypassing the 50 to 100-mile trek down California’s rivers the salmon are able to bypass the predicted significant losses that would occur from the poor river conditions.

The CDFW has been monitoring the river conditions in the event that Governor Gavin Newsom declared a state of emergency or there was no improvement in the conditions the department was prepared to move forward with the project.

When Newsom declared a drought emergency in two Northern California counties on April 21 the department was ready to move.

“We analyzed that river conditions that started to deteriorate two months ago and we put into action setting up all the trucking operations so if drought was actually declared, which it was, and if conditions had not improved, we would be ready to take and move the fish,” said Morse.

This is the second consecutive dry year, and the governor directed state agencies to take immediate action to bolster drought resilience and prepare for impacts.

Although it has not been declared a state-wide emergency the governor’s office will continue to monitor the situation.

There was a similar effort made by the CDFW in 2014 brought on by a severe drought that moved 300,000 young chinook salmon to San Francisco Bay for release either in trucks or on barges.

In 2014 they were in the third consecutive year of a study to determine if barges would improve the smolt survival, by determining which group of fish were able to make it back to their natal hatcheries.

“CDFW is utilizing lessons learned from the past 15 or more years of salmon releases and the last drought to maximize release success,” said Jason Julienne, North Central Region Hatchery Supervisor in an April 28 press release. “Trucking young salmon to downstream release sites has proven to be one of the best ways to increase survival to the ocean during dry conditions.”

In the end it will take approximately 146 individual truck loads to move the salmon and ensure high survival rates.

“Our main goal is to help get the highest survival rate possible, and this year the conditions are very negative and hopefully we get a high return,” said Morse.