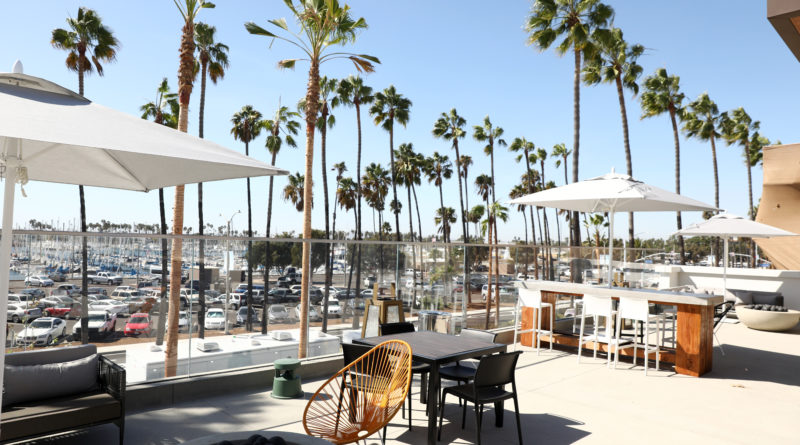 2nd & PCH is a 215,000-square-foot retail center across from Alamitos Bay Marina; its developer was the same company behind the failed revitalization project at Redondo Beach’s King Harbor.

LONG BEACH―What was once an uninhibited motel on a piece of prime real estate on Pacific Coast Highway in Long Beach now a new two-story shopping center.

A ribbon cutting ceremony was held on Oct. 24 for 2nd & PCH. The center will be home to about 60 businesses and Property General Manager Samantha Lopez said they are about 75 percent leased. She anticipates being at 100 percent by summer of next year. Stores such as Whole Foods, the first Long Beach Shake Shack and Lululemon are open for business, but many others, including several fitness studios, about a dozen other restaurants and several retail stores, have only signs with their names foreshadowing their opening.

The site was previously the SeaPort Marina Hotel, whose doors closed in February 2017. The location on the corner of 2nd Street and PCH is walking distance from Alamitos Bay Marina and the shopping center is described on its website as “a coastal contemporary retail and restaurant destination inspired by the neighboring marina.”

Lopez said visitors have come from all over, including Los Angeles and the neighboring marina.

“I see a lot of Los Alamitos consumer coming over,” Lopez said.

One thing creating a buzz at the center: the arrival of celebrity chefs Mary Sue Milliken and Susan Feniger, who opened Pacha Mamas. Lopez said Feniger has been spotted at the restaurant, calling out orders. The duo has a second restaurant, Border BBQ, also at 2nd & PCH. They are opening a third, Twist, which will be a dessert shop with churros, soft serve and other sweets.

“We wanted to think about every consumer and how they can each come here and spend time here and dine here and shop here and have an experience from it as well,” Lopez said.

Lopez said they wanted to add to that experience in every detail, by providing plenty of general outdoor seating, which includes swinging chairs, wall art both in and outside of stores and landscaping, including olive trees. The center is also going to have several second floor restaurants with outdoor seating and marina views.

“Thinking about the consumer experience has been a really huge part of what we are doing,” Lopez said.

Some slip owners in Alamitos Bay Marina expressed concern at a May meeting at Long Beach Yacht Club; they said the center would increase parking issues in the already busy area. Lopez said the center has 1,100 parking spaces in two parking structures on either end of the center. In a statement on the Long Beach Economic Development website, the department wrote on Oct. 29 that no complaints or serious incidents related to parking were reported throughout the grand opening weekend of the retail center.

The city of Long Beach has been working on an Alamitos Bay Parking & Circulation Master Plan since 2018. Sparked by a $105 million to upgrade the marina and several retail developments, including 2nd & PCH and the future San Pedro Fish Company, the plan aims to enhance mobility in the area by maximizing the number of parking spaces and improving the design and circulation of the parking lots and adjacent areas. The city’s parking consultant, Walker Parking Consulting, is in the process of evaluating all the parking demands and requirements in Alamitos Bay. The first draft of the study is anticipated in the first quarter of 2020.

2nd and PCH was developed by CenterCal – an El Segundo-based developer with ties to another waterfront project: The Waterfront in Redondo Beach. The company was set to redevelop Redondo Beach’s King Harbor, but plans were halted in 2017 after local residents approved a ballot initiative to restrict commercial growth on the city’s waterfront. CenterCal is still involved in heated litigation with the city of Redondo Beach over the outing of the project.

Editor’s note: A previous version of this story stated Hawt Yoga was among the open stores. The story has been updated to reflect that Hawt Yoga is not yet open.