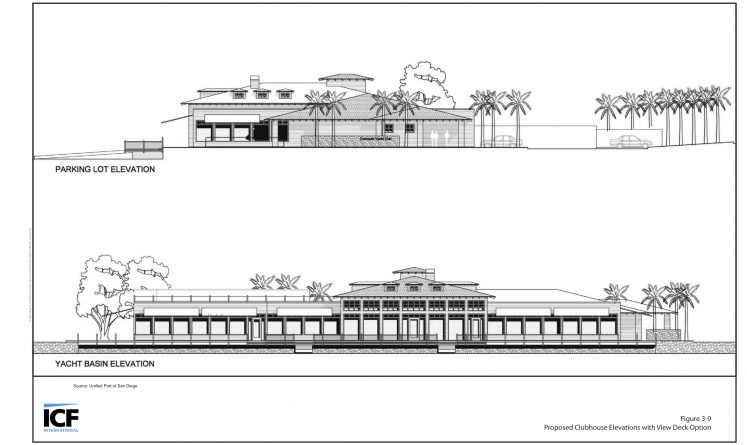 Plans to rebuild clubhouse will be reduced from earlier iteration.

CORONADO — Plans to update Coronado Yacht Club’s clubhouse could soon be taking final shape, as the Port of San Diego and California Coastal Commission address a few outstanding topics on an initial iteration of the project.

An early version of the clubhouse replacement project was approved about six years ago but is likely to be reduced in scope, according to a Port of San Diego spokesperson.

The clubhouse replacement project was set to be revisited by the Port of San Diego’s Board of Port Commissioners in August, but was pulled from the agenda and is likely to be discussed again later in the fall.

The item was pulled, according to the port district, to give the multi-city agency and Coastal Commission staff time to address a few lingering items.

What changes will be made to Coronado YC’s clubhouse replacement project will likely be revealed once it’s back on the Board of Port Commission’s agenda, but plans would definitely differ from what the port district approved in September 2011.

The commission had approved a proposal to allow Coronado YC to build a new clubhouse, add 108 slips and provide additional parking. Coronado YC’s leadership brought plans to the port district in July 2011, with the commission’s approval coming a few months later.

The approval in 2011 came with certain accommodations for public access, according to information published by the port district.

Port district staff also stated, in its 2011 report, the approved plans would require Coronado YC to demolition existing structures and create a larger sailing venue. The expanded sailing area, according to the port district, would have accommodated a junior sailing program.

Nearly half of the sailing program’s 300 junior members did not belong to the yacht club; the program was open to the public.

Plans also called to build 372 total slips at the yacht club, up from the 264 already in place.

The clubhouse replacement project was also in front of the State Lands Commission and California Coastal Commission after the port district’s approval.

Replacing the clubhouse was expected to cost between $10 million and $15 million when the port district initially approved plans; the anticipated budget for updated plans is not available.

Coronado YC and the Coastal Commission had separately been at odds in the past.  Both parties were the subjects of a lawsuit over plans to build a dock extension at the yacht club. The lawsuit, which made it all the way up to the state’s Court of Appeal in 1993, stemmed from a 1990 port district approval of the yacht club’s plans for a 640-foot dock extension.

The yacht club, which has been at its current location since 1946, was founded in 1932 and originally met at the Hotel Del Coronado.

An attempt to reach the Coronado YC for this story was unsuccessful.

Coronado YC is located at 1631 Strand Way and adjacent to Glorietta Bay. Several changes had been implemented at Glorietta Bay in the past few years, such as dock upgrades and a new boat launch ramp.