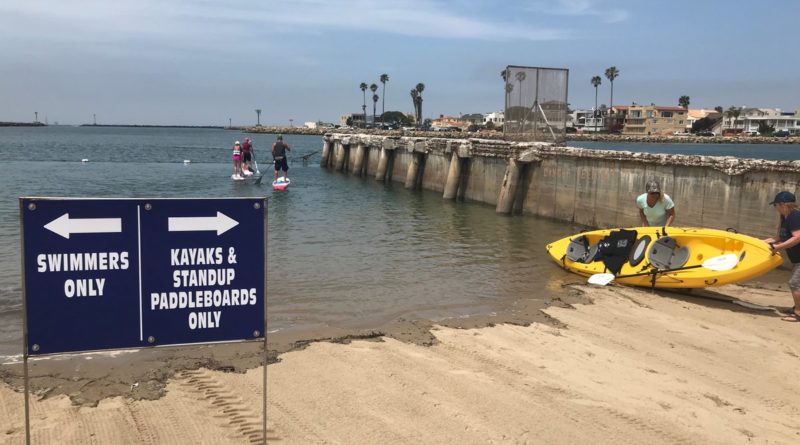 OXNARD — Ventura County’s Harbor Department has reportedly reached an agreement with the California Coastal Commission to allow for kayak and standup paddleboard (SUP) launches at Channel Islands Harbor. The tentative agreement was announced on June 13.

Kayakers and SUP users will have access to a temporary launch lane at Channel Islands Harbor’s Kiddie Beach, which is located by the northwest corner of Victoria and San Nicolas avenues.

Signage has been installed at Kiddie Beach, which was previously (and exclusively) reserved for swimming, to direct kayakers and SUP users to the launch area.

A temporary launch ramp at Kiddie Beach was sought after sand erosion at nearby Hobie Beach made launching activities difficult there.

“Hobie Beach is located just north of Kiddie Beach, but launching a kayak became difficult in recent years as sand wasn’t being retained due to an erosion issue,” Ventura County staff said in a released statement. “In April 2018, the Harbor Department sent a request to the California Coastal Commission asking for a temporary launch lane at Kiddie Beach while a permanent solution to Hobie Beach could be reached. The request was recently approved.”

Zaragoza, in a released statement, said the launch ramp would provide local residents and visitors with increased access to the harbor.

“We couldn’t be more pleased to increase access to the community of kayakers and paddle boarders, particularly the elderly and disabled,” Zaragoza said in a statement. “This portion of Kiddie Beach at the harbor has been long coveted by those community members, as it is the easiest way for them to launch.”

The ribbon-cutting ceremony occurred about one year after a kayak launch ramp was installed at Ventura County Day Dock, near the boat launch ramp.

Launching options at other docks and launch ramps around the harbor are still available to the public, according to county staff.