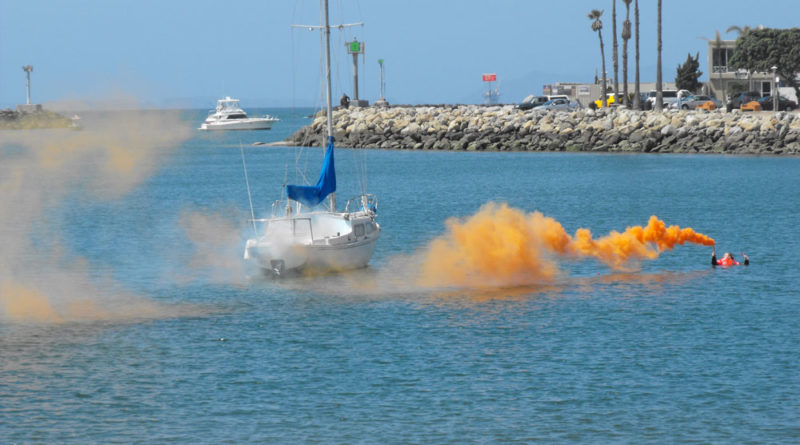 Ventura County Supervisor John Zaragoza presented a proclamation on behalf of the county recognizing the event as the kickoff to National Safe Boating Week, May 16 -22.

Spectators watched a thrilling rescue demonstration in the harbor. In that “rescue,” the Ventura County Search and Rescue team flew by helicopter to rescue a boater whose boat was engulfed in flames. The rescuer climbed out of the helicopter to save the “victim,” then the Oxnard Fire Department’s Water Rescue Team plucked the rescuer and the boater from the water and brought them aboard their watercraft.

Channel Islands Harbor Patrol and Ventura County Fire launched the 38-foot fireboat to put out the “fire” on the sailboat while Gold Coast Ambulance service helped treat the “victim” at the Coast Guard station.

Vendors and agencies were also on hand to demonstrate the latest in water safety products.

Nearly 200 expired flares were turned into the Ventura County Sheriff’s Bomb Squad for proper disposal. California State University Channel Islands took in old life jackets and gave out 70 new ones at no charge.

Guests were able to learn how to properly shoot a flare and visitors could learn about kayaking, paddleboarding and how to administer CPR.

“As an avid boater I was engrossed watching the maritime professionals who put on a spectacular demonstration of on-the-water rescues,” said attendee Jeff Smith. “To my pleasant surprise I was able to exchange two of my old life jackets for two new ones for free. I also enjoyed meeting the men and women of the Coast Guard who protect our waters. For once, safety was number one.”

Henry Goldman, event chair and Coast Guard Auxiliary member said, “I was pleased to hear from visitors about their experiences. Many told me they loved seeing this type of event in our community and others spoke about how much they learned about safety on the water today.”

Food and beverages were also served and sponsored by the Pacific Corinthian Youth Foundation with proceeds going to support the youth sailing program in Channel Islands Harbor.