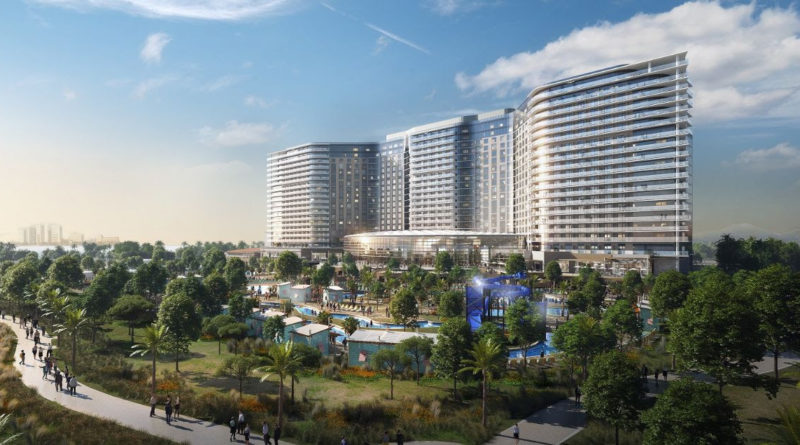 RIDA’s Bayfront proposal earns a much needed development permit, allowing all the players involved to pursue financing and prepare for construction.

SAN DIEGO—The administrative portion of Chula Vista Harbor’s planned redevelopment took another step forward on June 18, when the Port of San Diego’s Board of Port Commissioners approved the issuance of a Coastal Development Permit, or CDP, for the Bayfront project’s hotel and convention center.

Gaylord Hotels will operate the hotel and convention center, which will be branded as a Marriott and bring 1,600 hotel rooms and 400,000 square feet of convention and meeting space to the Chula Vista Bayfront area. Other elements of the planned project include: retail stores; restaurant and bar/lounge spaces; spa; recreational facilities; pool with lazy river; and, bicycle and boat rentals.

Port district staff estimates the redevelopment project will cost $1.13 billion to complete; they also estimate the project will generate $1.3 billion of economic impact on the Chula Vista waterfront. As many as 10,000 jobs could be created while the hotel and convention center are being built, according to RIDA and port district staff.

“Once built, another $475 million is anticipated to be generated per year with 1,500 permanent jobs created,” port district staff stated.

The new hotel would be built just west of Marina Parkway, in between G and H Streets.

“Public infrastructure improvements will begin first and could get underway in mid-2020, which includes preliminary site preparation, building access roads and new public streets,” port district staff said in a released statement. “To ensure connectivity between the resort hotel and convention center and the wider Chula Vista Bayfront area, this project … [will] include a public esplanade and a plaza and activity village with pedestrian promenades and bike paths, dining and snack stands, game activities, public art and a pool with public access.

The port district, city of Chula Vista and several stakeholders spent the better part of a decade planning the hotel and convention center, which is a centerpiece of the Chula Vista Bayfront Master Plan. Development of the master plan, according to port district staff, involved more than 100 community meetings and constant interaction with the California Coastal Commission.

Once completed the new Chula Vista Bayfront would, in addition to the new hotel, convention center, retail and resort amenities, feature more than 200 acres of parks and a shoreline promenade. There will also be space for walking trails and RV camping. Buffers will be in place to protect coastal resources, native species and wildlife habitat, as well.

The port district and RIDA will now work on securing financing for the project. Other next steps include obtaining permits, closing escrow and executing a lease.

Groundbreaking and construction are expected to begin in mid-2020.