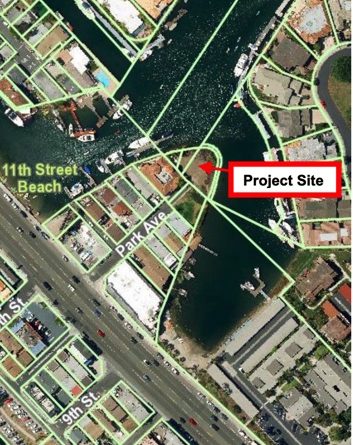 The rezoning allows for low density housing to be built in the open space located at 16926 Park Avenue, should the California Coastal Commission also approve.

HUNGTINGTON BEACH—The Huntington Beach City Council gave the green light to rezoning a vacant property on the city’s harbor waterfront at the end of Park Avenue to low density housing.

At their March 2 meeting, council members approved a zoning map amendment to change the zoning on a 6,179-square-foot parcel at 16926 Park Avenue from water recreation to residential low density.

The site is currently vacant with two attempts to bring a public marina to the property both failing. In July 2017, the Huntington Beach Planning Commission denied a request from the property owner to construct a boat marina with a community dock, a two-story building with a 508-square-foot marina office and public restroom on the first floor, a one-bedroom 565-square-foot caretaker’s unit on the second floor, and a detached 441-square-foot two-car garage on the subject site.

The applicant appealed the Planning Commission’s action. In 2018 the property owner and the city entered into a settlement agreement, with Huntington Beach agreeing to process the proposed requests for a rezone from water recreation – marina – to residential at a reduced fee. In exchange, the property owner agreed to withdraw the marina project and the appeal.

The new zoning allows for a single family dwelling with city approval of a coastal development permit. However, no development has yet been proposed.

Comments submitted from the California Coastal Commission in August 2019 included concerns of exposure of the site to flood and erosion hazards. The comments also stated means for offsetting the loss of public access to harbor waters would need to be included in the Local Coastal Program Amendment.

In regards to that issue, city staff wrote in Local Coastal Program Amendment (LCPA) No. 19-001: “The vacant subject site currently does not provide a formal opportunity for public coastal access and will continue to lack public coastal access while undeveloped. Future residential development on the subject site that will be more compatible with the surrounding residential area could only occur if the LCPA were certified.”

In response to the agenda item, the City Council received two emails. One of which expressed the opinion taking the marina off the table was a positive step but questioned whether a residential development could get Coastal Commission approval. The other expressed concern about any kind of development on the lot, stating the property is prone to flooding. That email also stated the narrow road is almost impossible to exit as-is – an issue the writer believed would be aggravated by more vehicle traffic.