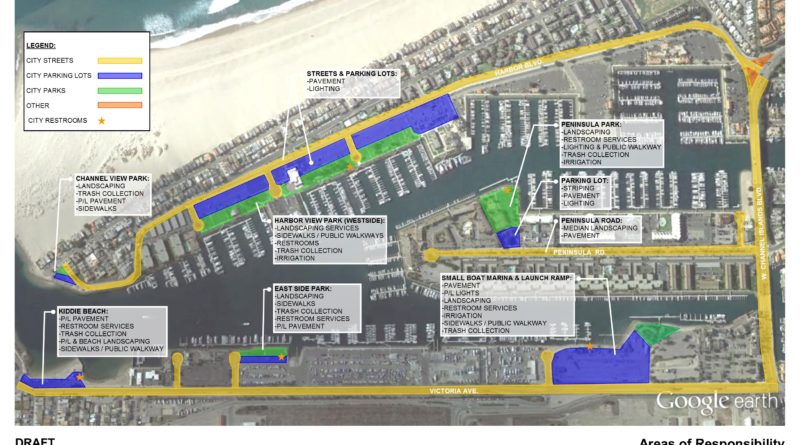 Oxnard ceased maintaining its areas of responsibility, which, in turn, cost the county $500,000.

OXNARD—Trouble is brewing on the waters of Channel Islands Harbor, as the city of Oxnard has apparently stopped maintaining areas on the waterfront it is responsible for maintaining. The lack of maintenance has purportedly cost Ventura County an estimated $500,000.

In July 2018, Oxnard city officials stopped providing maintenance work for its areas of responsibility of the harbor, such as public parks, parking lots, restrooms, lighting, green area watering and landscaping, and more.

Harbor Director Mark Sandoval, in a recent letter to the Board of Supervisors, stated harbor staff had immediately assumed the responsibility of harbor maintenance and upkeep following the city’s declaration to no longer do the work.

“We could have sat on it, but it would be a disservice to the public,” Sandoval said.

At a Ventura County Board of Supervisors meeting in February, Sandoval laid out the cost of the upkeep since the city has abandoned its duties. The cost was $500,000, which was covered by a $9 million reserve fund set aside for capital projects at the harbor. Money from the fund, however, was never intended for ongoing maintenance costs.

Sandoval also pointed out the city of Oxnard receives funds through tax revenues for ongoing harbor maintenance and upkeep. Channel Islands Harbor is an enterprise zone and it must be self-supporting. It does not rely on taxpayers for planning, development, or management funds.

A 50-year Memorandum of Agreement (MOA) between Ventura County and the city of Oxnard defined maintenance responsibilities and other roles. The MOA was signed in 1963 and allowed Oxnard to annex certain landside areas while benefitting from tax revenues and assuming responsibility for the maintenance and upkeep. The MOA was later extended to 2015.

In March 2015, the Ventura County Board of Supervisors ordered the agreement between the county and city be revised. Oxnard’s then Mayor Tim Flynn, along with members of the public, asked for more say in harbor development. One week later, the Board of Supervisors removed the planning and development language from the MOA, yet Oxnard officials have still not voted to adopt the revised agreement.

Oxnard, according to the MOA, was to provide sewage service, water, and utilities plus other infrastructure like public restrooms, parking lots, walkways and more. Since that time, the city has received bed, sales, property, and lodging tax revenues. Per this agreement, the county has managed and maintained oversight of the harbor providing staff for Harbor Department operations including harbor patrol, harbor planning and development.

The Board of Supervisors, in January, canceled a master tax sharing agreement with Oxnard. The agreement laid out how property tax proceeds are to be split between the county and the city when county land is annexed into the city.

“It’s unsustainable,” said Sandoval, “It’s not productive but more important there is a lack of equity here.” He also stated, that $3 to $ 4 million that should have been put toward maintenance and upkeep by the city has not been used as intended.”

Continuing efforts to reach a new and equitable agreement have failed despite a host of meetings between harbor staff and city officials.

“It is unethical for the city to keep the money and not provide the service, ” Supervisor Steve Bennett, who serves as the board’s chair, said.

Bennett added an agreement is needed in order to go forward, but upkeep is also necessary.

Supervisors John Zaragoza and Kelly Long agreed the county could not sit by and let these areas go without proper upkeep, pointing out maintenance of the harbor is a public health and safety issue.

“The constituency doesn’t know if the city or the county is responsible. They just want safe parks and clean restrooms,” stated Zaragoza.

As it stands, a new agreement still needs to be negotiated to solve the ongoing need to maintain the level of service to the public at Channel Islands Harbor.

The Harbor Department has investors ready for new development on large projects like the complete revamp of the decaying Fisherman’s Wharf on the harbor’s east side and the complete overhaul of the long-shuddered Casa Sirena Hotel and Lobster Trap restaurant on the peninsula.