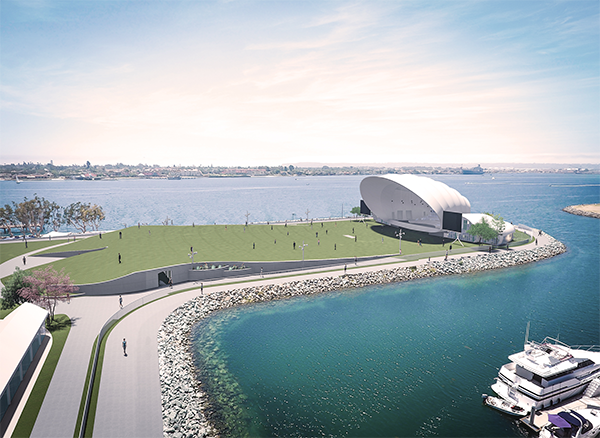 SAN DIEGO—The Port of San Diego’s plan to bring an outdoor performance venue to a marina waterfront earned yet another approval from the California Coastal Commission, Feb. 7. Commissioners formally accepted the port district’s Board of Port Commissioners’ adoption of a Port Master Plan amendment, paving the way for the Bayside Performance Project to continue forward with its currently proposed plans.

Commissioners formally certified the Port of San Diego’s Master Plan amendment on Nov. 8, 2018, an action requiring the port district’s board to accept by resolution. The resolution of acceptance came on Dec. 11, 2018, during the final Board of Port Commissioners meeting of 2018.

The Coastal Commission’s vote on Feb. 7 completed the formal process, essentially allowing the Bayside Performance Park project to elevate to the next procedural level.

Final adoption of the Port Master Plan amendment signifies the Coastal Commission is satisfied with the port district’s efforts to address substantive issues such as public access and sea level rise adaptations.

Bayside Performance Park, which could cost $45 million to build, should start to become a reality as 2019 moves forward, as the Coastal Commission and port district seemingly on the same page. Port district officials have been angling to bring the permanent outdoor concert venue online for quite some time now, as part of a larger effort to revitalize the Downtown San Diego waterfront.

Once completed the new Bayside Performance Park would be open to the general public for 85 percent of the year. The concert venue would host four free public events annually, including performances on Memorial Day and Labor Day.

Other perks available to the public would include free admission to rehearsals, free music education events and reduced ticket pricing.

The San Diego Symphony has been performing at a makeshift outdoor venue, located at a park between the Marriott Marquis Marina and Fifth Avenue Landing on the downtown waterfront, since 2004. Port district leadership and officials, however, have been angling to build a permanent concert venue at Embarcadero Marina Park South, where Bayside Performance Park would be located.

Boaters docked at Fifth Avenue Landing and Marriott Marquis Marina would be able to watch or listen to concerts at Bayside Performance Park while aboard their vessels.

The permanent outdoor concert venue could host as many as 10,000 people, according to port district staff. Bayside Performance Park could host 110 half-day or 55 full-day events, up from the 37 functions held under current scheduling.