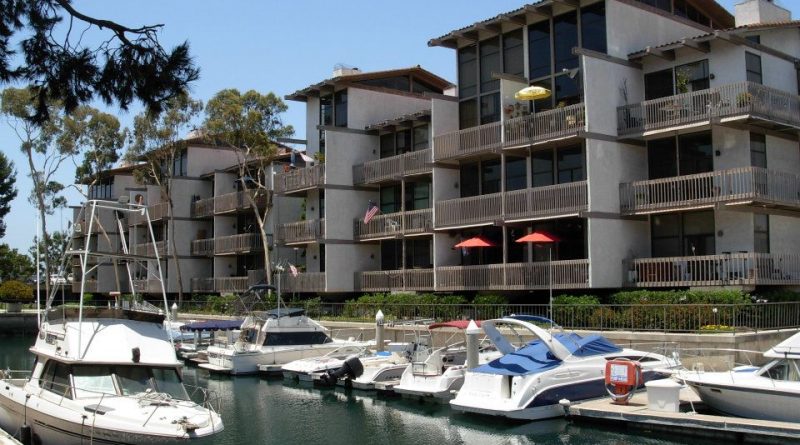 Commissioners, citing questions about nesting and design, approve an appeal to allow for greater scrutiny of the wall’s effect on the local environment.

LONG BEACH—Plans to replace a security wall at the Marina Pacifica condominium complex at Long Beach’s Alamitos Bay hit a snag, as the California Coastal Commission found substantial issue with the city’s approval of the project.

An appeal was filed with the Coastal Commission to challenge the granting of a permit for the security wall, which would measure 2,500 linear feet once completed. The appeal stated the Marina Pacific Homeowners Association’s plans to replace the security wall would result in the removal of non-native pine and eucalyptus trees.

“The appellant contends that Marina Pacifica Homeowners Association did not disclose the proposed project’s impact on trees or provide alternatives to the homeowners. The appellant asserts the city [of Long Beach] did not properly condition the protection of trees,” Coastal Commission staff said during a presentation of the appeal on June 12.

Coastal Commission staff pointed out the city of Long Beach does have tree protection measures in place for development projects. Those requirements call for pre-construction surveys by a biologist, one-for-one tree replacement and a five-year monitoring program “to ensure tree survival.”

Charles Richey, who challenged the permit allowing Marina Pacific Homeowners Association wall replacement project to move forward, said there are about 300 trees in the condominium complex.

“Marina Pacifica serves as a critical refuge for snowy egret, for blue heron, and many other species of birds,” Richey told commissioners.

Richey added the original plan was to replace a 2,000-foot fence with a same-sized security wall. In 2018 a decision was made to extend the security wall by another 500 feet. An arborist, Richey said, came into the picture in 2019 and stated the 500-foot extension would result in the loss of 20 trees – information apparently not shared with Marina Pacifica residents.

“Our homeowners voted in favor of this wall with the assurance that no trees would be negatively impacted,” Richey said.

Roger Peter Porter, the architect who was selected to design the wall, said the homeowners’ association is in compliance with Long Beach’s tree protection requirements.

“Marina Pacifica, they are conforming to all recommendations,” Porter told commissioners. “The trees [and] the nesting are a priority. There’ll be no activity starting until the nesting season is over.”

Coastal Commission staff said it is believed there aren’t any nests in the trees within the condominium complex – but those trees could serve as a potential nesting home and taking them away probably means the birds would find other trees for their nests.

Commissioner Dayna Bochco had questions about the nesting issue and requested the commission move forward with a hearing to vet the issue further.

Marina Pacifica Condominiums are located at 6201 Second Street in Long Beach and are mostly surrounded by Alamitos Bay. Several boat slips are in the vicinity of the condominium development.

Coastal Commission members and staff met virtually on June 10, 11 and 12.