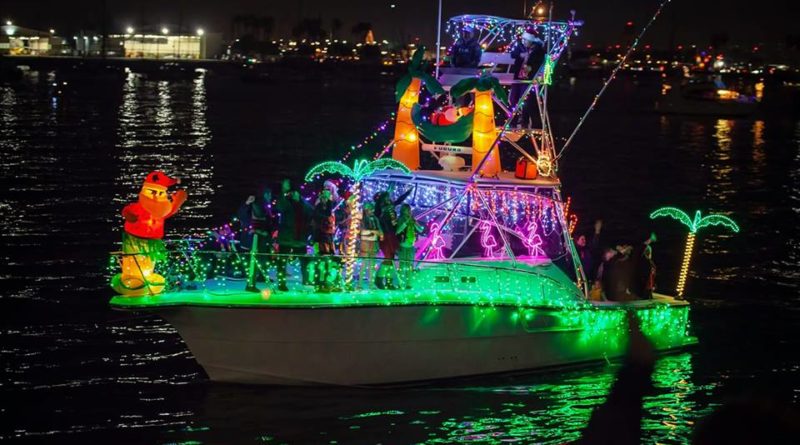 Known as one of America’s largest popular culture events, Comic-Con celebrates 50 years in San Diego and will serve as inspiration for boat parade contestants.

SAN DIEGO—The holidays are creeping ever closer now that it’s August. Now is the time to start planning a schedule around the best Christmas boat parades – starting with one of the West Coast’s best, the San Diego Bay Parade of Lights. Organizers announced the theme of San Diego’s popular boating event and, as it turns out, another major annual event that takes place in San Diego inspired the theme.

Comic-Con, one of the top pop-culture in the country that revolves around films, comic books and more, will be the focus of the boat parade in 2019. Drawing more than 130,000 visitors each year and selling out quickly, “Comic-Con on the Bay” will celebrate the 50th anniversary of the much loved event.

“The San Diego Bay Parade of Lights gives boat enthusiasts and owners an opportunity to demonstrate their creativity in a fun way and we can’t wait to see what they come up with to celebrate Comic-Con’s 50th Anniversary this year. I’m sure the thousands of spectators who visit the bay to view the dazzling lighted boats will get a kick out of this year’s theme,” said Parade Chairman Larry Baumann.

Marking 48 years of the San Diego Bay Parade of Lights, this year’s event will take place on two consecutive Sundays on December 8 and 15. Port of San Diego presents the holiday boat parade, which brings in more than 100,000 guests a year, putting it on an even playing field with the popular Comic-Con conference. Onlookers can watch the procession of more than 80 decorated vessels from the shore or from boats in designated viewing areas.

A statement about San Diego Bay Parade of Lights said, “The parade route starts at Shelter Island and travels west past Harbor Island, then south along the Embarcadero, Seaport Village, and Cesar Chavez Park before turning parallel with the Coronado Bridge to the west side of the bay. The parade then proceeds past Peohe’s Chart House to the finish line in front of the Ferry Landing. It takes about two hours to complete the procession and there are many comfortable waterfront viewpoints along the route.”

Participants in the parade receive a variety of prizes depending on a number of categories, but all competing boats will get a plaque and are invited to the awards dinner at Tom Ham’s Lighthouse. Grand prize winners last year, for instance, won a luxury cruise package for two from Royal Carribean cruise line.

Learn more about sponsoring the San Diego Bay Parade of Lights by calling Larry Baumann at 619-222-1181 or larry@balihairestaurant.com.

Registration to enter vessels into the 2019 San Diego Bay Parade of Lights is now open and can be completed online.

For more information about this event and to enter the parade, visit the website at sdparadeoflights.org.