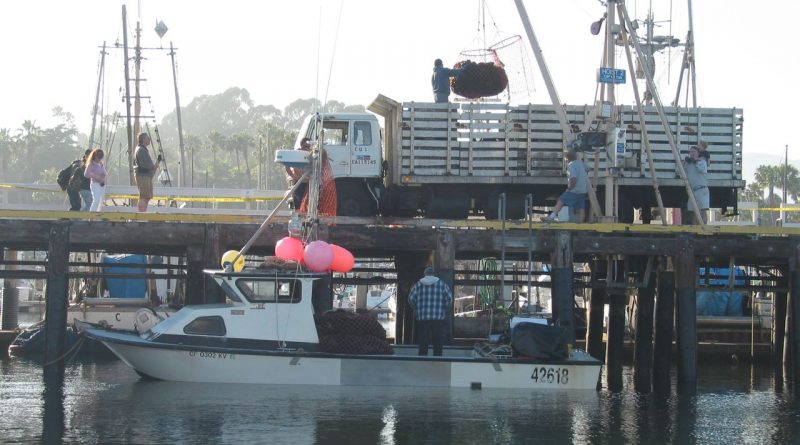 The envisioned Maritime Collective would serve as a multipurpose facility providing commercial fishermen with boat, gear and processing space as well as office, meeting and shop space for the emerging blue economy entrepreneurs.

With waterfront property at a premium, Commercial Fishermen of Santa Barbara (CFSB), a non-profit working to preserve the resilience of the local commercial fishing community, has been working with the City Council, Waterfront Department and Harbor Commission to ensure the shore-side spaces needed for gear, boat storage and cold storage do not disappear. They are also hoping to expand their footprint in the harbor, striving to turn the $35 million commercial fishing industry into a $70 million industry and aid in the city’s economic recovery from the coronavirus crisis.

“A starting point that will build momentum is our ‘Maritime Collective’ site concept, designed to foster economic development,” CFSB said in a letter sent to the City Council on June 4.

“It’s been around for a really long time and it’s never been realized,” Selkoe said.

CFSB’s plans for the multi-faceted Maritime Collective would satisfy highest priority needs for boat and gear space and incorporate additional components to capitalize on the upward industry trends and emerging blue economy, according to CFSB.

Commercial fishermen are already working with limited space, the port’s commercial fleet of 200 shares a 9,000 sq. ft boatyard on Garden Street. CFSB said the boatyard is half the size of what the current demand calls for and the waiting list is always long. According to CFSB, the future of the boatyard is also in question, saying the property’s owner is in planning stages for transforming the site into a hotel, restaurant and a tourist marketplace.

The Maritime Collective site plan includes space for solar-powered cold storage to allow fishermen leverage to hold their own bait and product, enhancing opportunity to sell seafood locally and at higher return, as well as a sub-leased seafood processing space to allow the creation of value-added products and local seafood distribution.

While international markets have collapsed amid the covid-19 pandemic, Selkoe said the local demand has increased. She said CFSB has seen a doubling of vendors at the Saturday Fishermen’s Market and a doubling in memberships to Get Hooked, Community Supported Fishery (CSF) program which delivers fresh seafood in the local community.

Santa Barbara Fish Market also started shipping boxes of frozen local fish to households regionally and nationwide; and four local fishermen began their own household deliveries or off-the-boat sales. With the shift in markets, comes the need for cold storage and more processing space to provide boat to kitchen-ready seafood.

“Getting access to processing is really good for our seafood industry and our local food security,” Selkoe said.

Selkoe said there will also be educational components to the space.

“It also opens up the opportunity for educational value to the site, we can bring in students and do tours and have live tanks for the seafood and watch the fishermen carrying their nets,” Selkoe said. “So we hope that it will become a really interesting, almost living museum.”

CFSB has appealed to the City Council to assist in the acquisition and construction or renovation of a .5 to .75 acre parcel adjacent to the harbor to accommodate the multipurpose facility.

“We are seeking $2 to $5 million in funding from a combination of private, state, federal and local sources for acquisition and development of property for the Maritime Collective,” CFSB said in the letter sent to the City Council on June 4.

The entire project is projected to cost $3 to $5 million, with CFSB seeking funds from grants and loans from federal, state and local government funding sources, as well as foundations and charities. CFSB said dialogue about funding the project has been initiated with several state agencies and they have applied for a grant from the USDA.

“That would give us about $100,000 to just get us to a shovel ready status for this project,” Selkoe said.

One of the major roadblocks is a lack of available property. The Harbor Commission’s Commercial Fisheries Subcommittee has also been working with CFSB to identify appropriately zoned real estate that could satisfy the space requirements of the city’s commercial fishing and seafood industries. However, all viable areas are currently encumbered by long-term ground leases within granted lands operated by the Waterfront Department.

“Our main ask right now is that you work with us to create a Santa Barbara Fisheries Economic Development Strategy,” CFSB said in the letter to City Council. “As you, our City leaders, complete your FY2021 budget review in the next two weeks, please consider how this strategy can be supported by City policies and actions.”