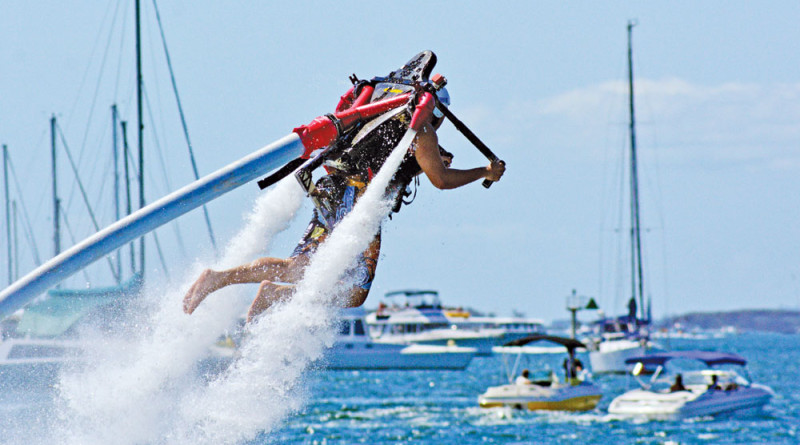 There were no public announcements of who won the bidding process for either project as of Oct. 19.

Long Beach accepted bids for the floating dock project through Oct. 14, according to one website where Requests For Proposals (RFPs) are published. Companies placed bid to fabricate four concrete float segments and install six total floating docks on the east side of Pine Avenue Pier.

City officials estimated the project will cost $876,000 to complete; the company whose bid is closest to the estimate would likely earn the contract award.

JetPack America offered thrill seekers, tourists and other visitors the opportunity to “fly” over water with a water-propelled jet engine attached to the person. The company engaged in a long public process with City Hall to determine whether jetpacks should be allowed in Newport Harbor. The City Council finally agreed to allow water-propelled vessel operations to exist in the harbor’s Turning Basin.

Dean O’Malley, president of JetPack America, said he hopes his company will be able to continue operating in Newport Beach.

“We are certainly hopeful and cautiously optimistic, since we feel that we are the best fit for the city, for a variety of reasons,” O’Malley said. “We’ve worked very hard over the past four years to build a solid reputation as a responsible and safe operator in the harbor and, during that time, we earned the distinction as the No. 1 water activity in Newport Beach on Trip Advisor.”

City Hall stated in its RFP a permit would be granted to a commercial operator “to operate a vessel(s) powered or maneuvered by means of mechanical water propulsion above the surface of the water in Newport Harbor.”

“The objectives of this RFP opportunity are to promote and instruct safe, enjoyable, and high-quality operations to the public while fairly allocating limited harbor resources. No permit shall be issued to a non-commercial operator to operate a vessel powered or maneuvered by means of mechanical water propulsion above the surface of the water in Newport Harbor,” the RFP stated.

More information about these RFPs, if made available, will be published as the news breaks.