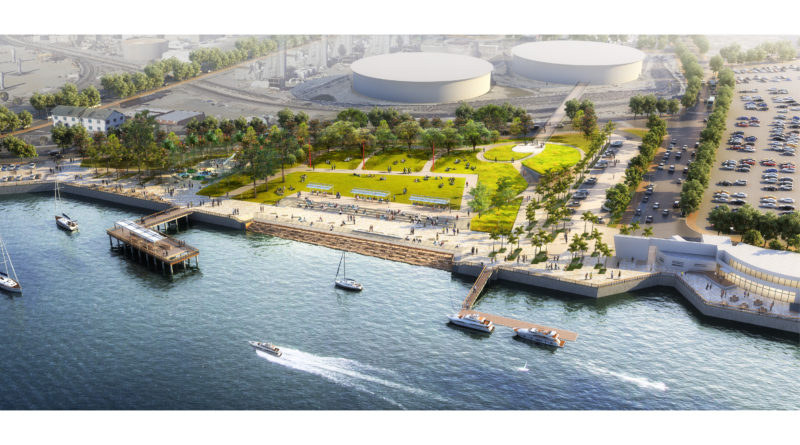 SAN PEDRO—Most Southern California developments, especially near the coast, are making an attempt to capitalize on location, expensive name-brand storefronts, luxury hotels and other upscale amenities. The Wilmington Waterfront Promenade, on the other hand, is one of the few recent development designs attempting to incorporate more green space and community gathering centers.

On Feb. 21, Board of Los Angeles Port Commissioners held a special meeting to provide an update on the anticipated Wilmington Waterfront Promenade. Expected to cost $52.7 million, the project is expected to be completed in April 2022. According to Hugo Cisneros, an engineer with the Port of Los Angeles, the port district will advertise for construction in June this year and construction is anticipated to begin in December.

Wilmington Waterfront Promenade is being positioned as a meeting place for families to share picnics, ride bikes, talk walks and enjoy the views. Another element that may be of interest to boaters in the area is Wilmington Youth Sailing Center will have a place in the new design.

So far the design has been 100 percent completed and there has been progress in securing a Coastal Development Permit, Right of Entry Permit, and other documentation to begin construction. Notably, the bid package still needs to be finalized and because one parcel where building will take place is in Long Beach, the port district is waiting for approval of Joint Rail Negotiations, which could be granted in spring 2019.

Another aspect potentially holding up the process is the Regional Water Board’s issuance of Clean Water Act certification. The final review is pending. However, the port district had submitted the general permit application on Nov. 22, 2017. This is also holding up the Army Corps of Engineer from issuing another permit, but a provisional permit was awarded to the Port on April 16, 2018.

Public speakers provided mostly positive feedback to the port commissioners during the meeting, which was a contrast to the criticism of San Pedro Public Market, another major project on the LA Waterfront’s agenda and set to open in 2021.

“Wilmington should be paved in gold with all the money from the ports, from the refineries and the businesses – and look what it looks like. You know, we need to fix this. And I want to thank you all because you are fixing it now,” said one longshoreman, who bought his first house in Wilmington.

CEO of Braid Theory, Ann Carpenter, also commented that she would like to see support in rebuilding the marine habitat and providing youth activities to explore marine life, such as the events at Cabrillo Marine Aquarium in San Pedro.

Visit lawaterfront.org to stay up to date on projects taking place at the L.A. Waterfront.