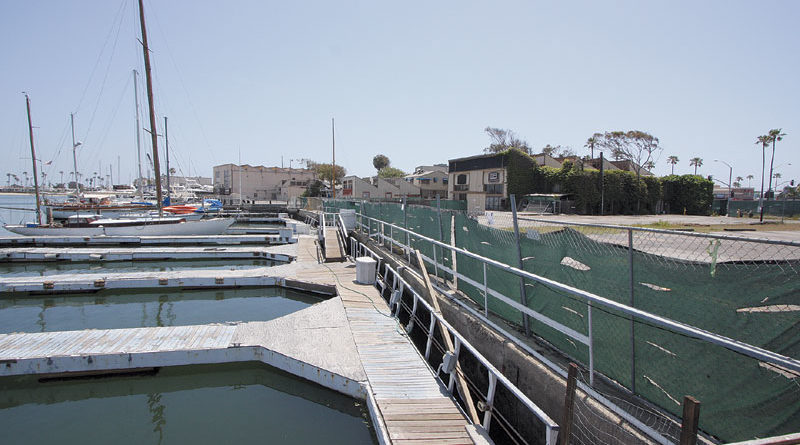 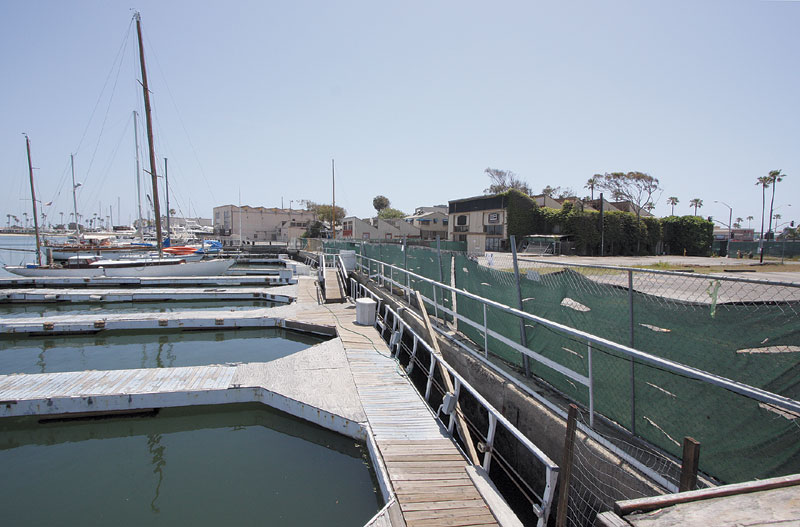 NEWPORT BEACH — Green fences line the grounds at 2300 Newport Blvd, where a World War II-era shipyard once operated. Demolition and construction on the site have finally begun, with development firm ETCO Homes Inc. moving forward with its plans to create a mixed-use residential and retail center here, along with a 23-slip marina.

First approved by Newport Beach City Council in 2006, the Newport Bay Marina project was okayed by the California Coastal Commission in 2009. The final city building permits were obtained in February, paving the way for construction to begin.

“It’s been a challenging effort, and we’ve been working on this for over eight years,” project developer Afshin Etebar told the Newport Beach Harbor Commission at its April meeting.

Afshin said he hopes construction of the waterside dock replacement and dredging will be completed in a year, and that the residential and commercial buildings will be finished in two years.

The planned marina will include 21 slips for boats in the 75-foot range, and two larger slip capable of holding boats up to 135 feet. But Etebar said the big slips will not be used for larger boats, as both the Coastal Commission and the Newport Beach Planning Commission have put restrictions on what size vessel can be put there, stressing the need to retain views of the harbor from the street.

“When the city approved project, they wanted to ensure that area’s kept open, and no large charter boats were going to stay there,” Etebar said. “We want to make sure we don’t put in any bigger pilothouse-type boats that could potentially block the view corridor from the street.”

Instead, the large slips will be used as public transient dock space to accommodate a number of smaller boats for two-hour temporary berthing. Etebar noted that the developer is looking into whether the temporary dock space can be utilized by boaters free of charge, or if a fee will be included to cover dock maintenance and monitoring costs.

“We intend to operate the temporary dock space by having a person out there, monitoring the land side and bayward side, to make sure the two-hour limit is being obeyed — and, at some point, we would like to charge something for that area,” Etebar said.

The site currently consists of 44,300 square feet of retail and office space, and it was once the location of a commercial shipyard. The project is located among adjacent commercial areas including Woody’s Wharf, the Crab Cooker restaurant and South Coast Shipyard.

The mixed-use development was seen as both a threat to the existence of marine-dependant businesses and shipyards in Newport Beach, and as a welcome sign to those wishing to clean up what was seen as a “blighted” and “rundown” property.             “It’s been  a blighted area in need of development, and I think it will be a great enhancement for the city and the harbor,” said Harbor Commission chairman Ralph Rodheim.

“It’s a beautiful project — but we have lost landside marine activity once again, and this looks like our future,” said Harbor Commissioner Marshall Duffield.

Duffield added that he is concerned about the residential units being in such close proximity to the noise and fumes associated with the nearby shipyard.

“I’m hoping you work it out to mitigate the noise and smell and find some methods that would allow him to stay there. We need these boat yards, and each one of these projects that comes along and displaces marine uses is kind of sad,” Duffield said.

Prior to construction of the docks, around 1,100 cubic yards of sediment must be dredged from the dock area and Rhine Channel, in front of the slips.