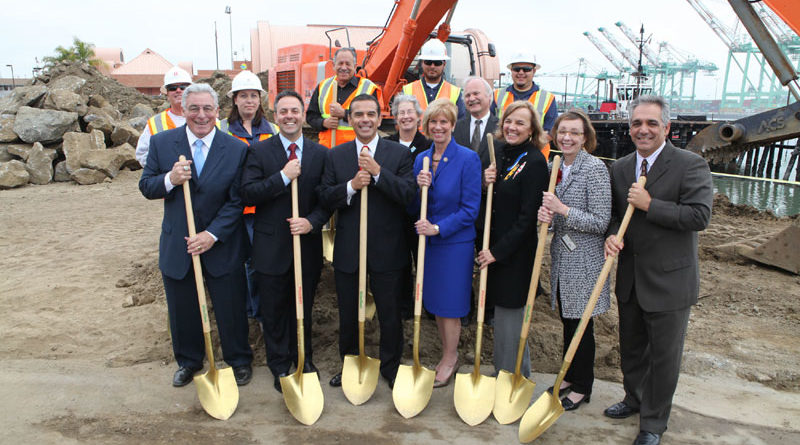 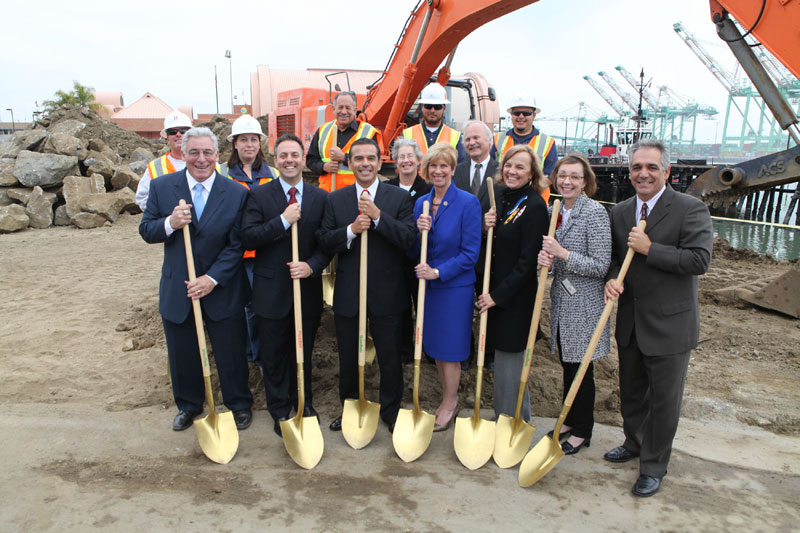 SAN PEDRO – Los Angeles Mayor Antonio Villaraigosa, Congresswoman Janice Hahn, Los Angeles City Councilman Joe Buscaino and Port of Los Angeles officials broke ground March 15 on a much-anticipated project for the downtown San Pedro waterfront that will create a new public open space and harbor area. The Downtown Harbor “water cut,” as it is being called, will remove 1.7 acres of land area to create a harbor that will eventually be surrounded by new development — including a new town square and promenade area. The location, just north of the Los Angeles Maritime Museum, is designed to become a centerpiece of the ongoing revitalization of the area’s waterfront.

“Over the next five years, we are investing $1.2 billion in capital improvement projects at the port — and creating approximately 20,000 jobs,” Villaraigosa said.

The project has been lauded by San Pedro residents who have been calling for the San Pedro waterfront development to start in the downtown area to help revitalize the community.

“There’s a lot of energy going on with these community projects around the port,” said Port of Los Angeles spokesman Phillip Sanfield. “The community basically told us, ‘Start with downtown first.’ They wanted us to connect the historic downtown to the waterfront, and that was part of the goal of starting the waterfront redevelopment right down on Fifth and Sixth Street.”

The new harbor cut will be situated along Harbor Boulevard between Fire Station 112 to the north and the Los Angeles Maritime Museum to the south. The harbor inlet will allow for vessels to dock, and it will create approximately 700 linear feet of promenade area. Surrounding the inlet will be a modern town square, featuring landscaping, lighting and expansive walking space. “This groundbreaking signifies a new era for the L.A. waterfront,” said Los Angeles City Councilman Joe Buscaino. “We are on our way to becoming a major tourist destination in the city of Los Angeles.”

Approximately 150 people attended the groundbreaking ceremonies, and Whale and Ale Restaurant owner Andrew Sieber noted the importance of the action for the city’s future.

“This is a milestone in port community relations,” Sieber said. “To actually see shovels in the ground shows a strong commitment for the Port of Los Angeles to do what the community would like it to do, and it hasn’t always been that way. The two have been very separate over certain periods, but now, there’s a strong tie.”

San Pedro Chamber of Commerce president Anthony Pirozzi said he believes the downtown harbor will give the port’s multiple new waterfront projects a centerpiece to link them together.

“The downtown harbor cut is not just another piece of our waterfront development, but it really is the cornerstone for it all,” Pirozzi said. “From the cruise ship promenade to the Cabrillo Way Marina, 22nd Street, the Fanfare Fountain and the coming of the USS Iowa, the downtown cut will not only link all of the pieces together, but will become the catalyst to the seamless interface of our historic downtown business district.”

Materials excavated to make the cut will be used to fill the site of the Berth 200 West Basin rail project, scheduled to begin later this year, which will minimize the project’s dredged material disposal costs.

The project marks the first time the port is requiring the dredging process to be done with electric equipment, which is expected to significantly reduce emissions.

Because of the construction, the parking lot between Fire Station 112 and the Los Angeles Maritime Museum will no longer be available. The parking lot across the street from Acapulco restaurant is available for general visitor parking.

The Los Angeles Maritime Museum will remain open during the project, with no interruption to its regular hours.