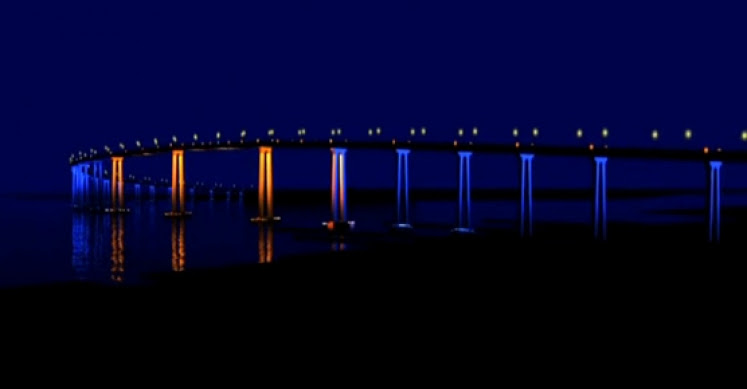 The San Diego-Coronado Bay Bridge project will include mounting energy-efficient LED lighting fixtures to the piers and structure.Port of San Diego photo

SAN DIEGO — The Port of San Diego’s plan to artistically light the Coronado Bridge is closer to fruition as BAE Systems recently gifted $300,000 toward the project.

The idea of illuminating the San Diego-Coronado Bay Bridge with an artist-designed lighting scheme originated with the port’s Public Art Committee’s quest in 2006 to identify a potential signature artwork for San Diego Bay. The port held a design competition and in 2010 the Board approved the selection of an international design team led by London-based artist Peter Fink to develop an artistic lighting design for illuminating the bridge.

On Aug. 9, BAE Systems San Diego Ship Repair presented a check for $300,000 – the largest contribution to date – to the port for the proposed project.

BAE Systems contributed to the initiative to fulfill a “percent-for-art” requirement set by the port for its new drydock project. Rather than installing an artwork on company grounds, the company opted to designate the money for the bridge lighting fund, as port policy allows.

The total amount raised to date, including the new BAE contribution, is approximately $455,000.

The proposed project would illuminate the San Diego-Coronado Bay Bridge providing artistic night time illumination of the external structural and architectural features of the bridge. It would involve mounting energy-efficient LED lighting fixtures to the piers, structure and parapets.