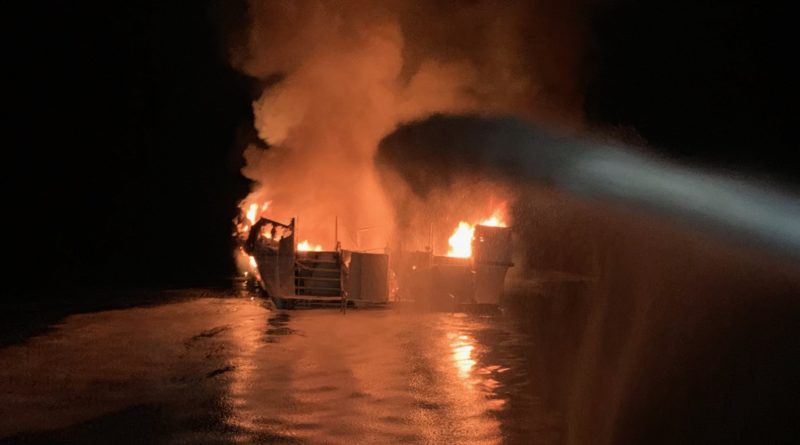 The FBI, Coast Guard and U.S. attorney in Los Angeles are overseeing the investigation, according to the two people who were not authorized to speak publicly and commented on condition of anonymity.

On Sept. 6, Santa Barbara County Sheriff Bill Brown said the investigation had not yet taken a criminal turn, though charges were possible. That turn of events appeared to happen Sept. 8 when federal agents raided the office of the boat’s owner, Truth Aquatics Inc. in Santa Barbara, and its two remaining vessels.

Investigators have been gathering other evidence, including interviewing the captain and four surviving crew members, since the Sept. 2 tragedy off the Channel Islands. Thirty-three passengers and one crew member were trapped below deck when the fire broke out after 3 a.m. on Conception. Initial examinations indicate the people died of smoke inhalation before being burned, Brown said. Five crew members were able to jump overboard and swim to safety.

A preliminary National Transportation Safety Board report released Sept. 12 confirmed that all six crew members were asleep when flames started to engulf the vessel. The report provides a timeline of events and actions taken by the boat’s crew, but it noted that investigators are still attempting to determine the source of the fire.

One crew member sleeping in a wheelhouse berth was awakened by a noise, according to the report. The crew member got up to see a fire rising from the compartment below and alerted others. Crew members attempted to enter the compartment and reach passengers, but were not able to use an access ladder that was on fire. They then tried to access the area through a forward window, but were overwhelmed by smoke and jumped overboard, according to the report.

The cause of the fire remains under investigation. NTSB member Jennifer Homendy has said investigators are looking at several factors, including how batteries and electronics were stored and charged.  The boat’s design will also come under scrutiny, particularly whether a bunkroom escape hatch was adequate.

If charges are brought, prosecutors are likely to apply an obscure federal law known as the Seaman’s Manslaughter Statute, which predates the Civil War and was enacted to punish negligent captains, engineers and pilots for deadly steamboat accidents that killed thousands.

The crime carries a potential penalty of up to 10 years in prison and sets a low bar for prosecutors, who only need to prove simple negligence or misconduct on the part of the captain or crew.

The burned remains of the boat were brought to the surface by a salvage team on Sept. 12.