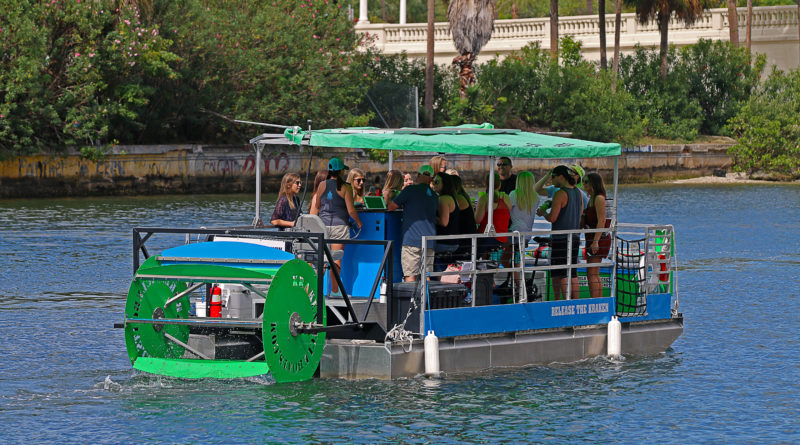 SoCal Cycleboats is interested in offering a pedal-powered boat to small groups for birthdays, bachelor/bachelorette parties, team building, corporate gatherings and other events.

If approved, SoCal Cycleboats owners, Michael Kapusta and Chris Ferren Cirinio, would be the first to run such a business in Southern California, according to Kapusta. The application was up for discussion at the Nov. 13 Newport Beach Harbor Commission meeting. Both Kapusta and Cirinio, who runs a similar business in Sacramento, were at the meeting to explain their concept.

“We’re excited about it, we think it’d be a fun new interactive experience and there’s nothing of its kind here,” Cirinio said at the Nov. 13 meeting.

SoCal Cycleboats would not provide food or drink service, at least to start, but would allow passengers to bring on their own beer, wine, cider or canned cocktails. Hard alcohol would not be permitted.

The operational hours proposed in the MAP application are 9 a.m.-10 p.m., with customers booking for 90 minute rides. Passengers would park at Balboa Fun Tours, where there would be five designated parking spots for the cycle boat. They would then walk over to the loading area at Mr. G’s at Peninsula Kitchen and Bar.

The proposed route would take passengers on a 4-mile loop throughout Newport Beach Harbor and allow for stops at local restaurants and bars.

“The other thing we want to do is support other local small local businesses in Newport Beach,” Cirinio said at the Nov. 13 meeting.

The cycle boat would have a sound system, with the volume controlled by the captain. The operation would need to follow all the regulations set forth in the MAP section of Title 17, including one stating music and sound from all vessels shall be controlled so as not to disturb a person of normal sensitivity at a point 100 feet from the hull of the vessel.

Ultimate approval of the MAP application is up to the harbormaster, but commissioners unanimously voted 6-0 (Commissioner Steve Scully was absent) to recommend approval of the permit, with a few conditions. Those conditions included having a certified master captain on board at all times and having several different routes instead of one to minimize the impact on residents living along the routes.