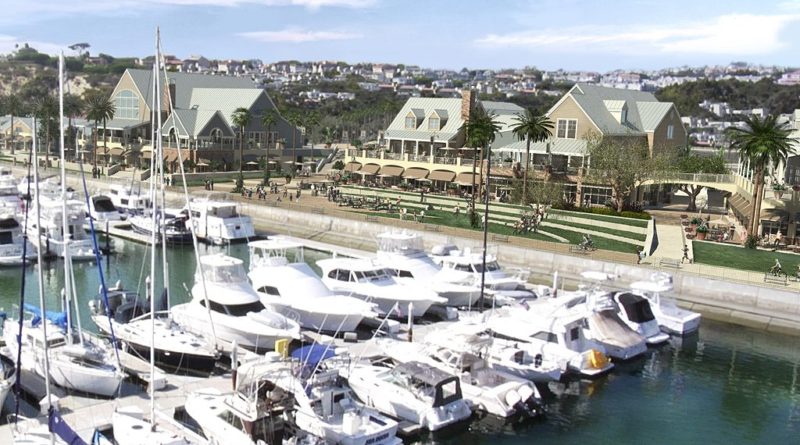 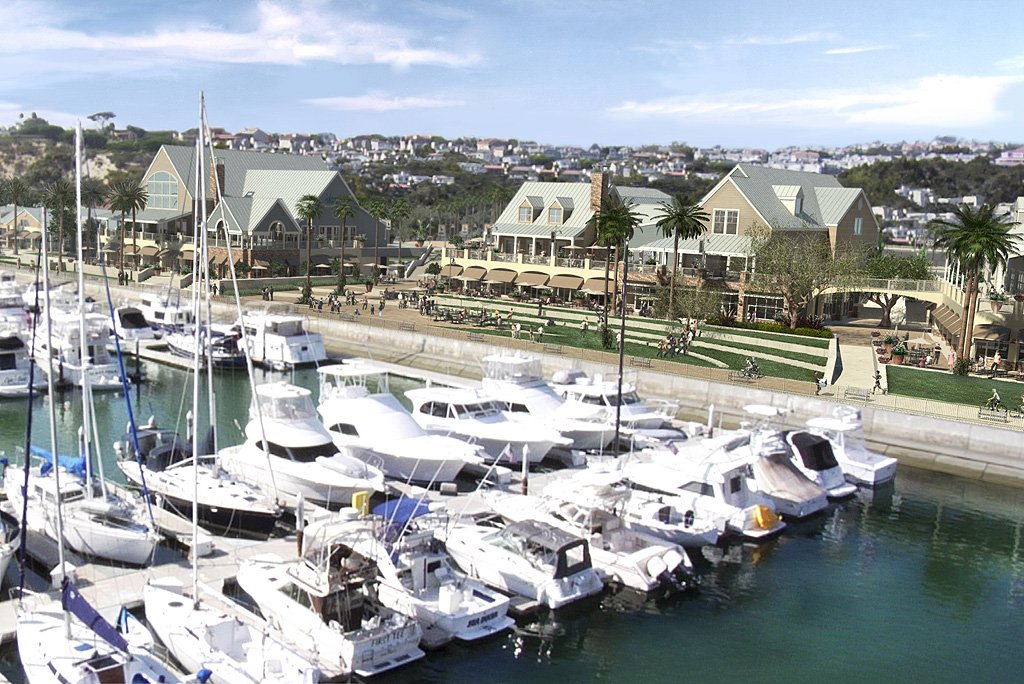 The longstanding outdated infrastructures of two major boating cities, Dana Point – the harbor that endured leaks and rotting docks for years — and Redondo Beach, which has suffered the loss of waterfront goers since being damaged from a 1998 winter storm, are awaiting their turn to undergo extensive makeovers.

Dana Point
A $100,000 plus repair on a recent Dana Point Harbor fire line is another sign to harbor users that the waterfront’s revitalization project needs to begin sooner rather than later.

The leak, which occurred below a concrete walkway in front of El Torito Restaurant on Golden Lantern Street is one of many repairs that have had to be made  throughout the harbor since 2005, as buildings continue to deteriorate as the city awaits an extensive harbor revitalization

“It’s like patching a bucket full of holes,” said Coffee Importers Owner Jim Miller, whose business is located in the harbor. “At some point it’s got too many leaks and you got to just get a new bucket.”

Dana Point’s new bucket is the highly awaited $7.4 million revitalization, that will replace or renovate Marina Village’s existing retail and restaurant structures in the eastern portion of the harbor and potentially develop an additional 30,000 square feet of retail and restaurant uses, a two level parking deck with space for 745 cars, a 35,000-square-foot Festival Plaza public gathering area and a high-tech dry storage facility for boats.

Since 2005, the repairs have cost the county an estimated $2 million.

“The harbor and its infrastructure is very old and in need of repair and or replacement,” said Brad Gross, director of OC Dana Point Harbor. “Improvements here will benefit all users either directly (new buildings, docks, roads, etc) or indirectly (new/upgraded utilities, sewer lines, lighting, etc).”

Revitalization plans have been sent to the city and are currently under review and analysis, Miller said.

“Hopefully within the next six months we’ll have our hearing,” he said.

The design and subsequent permitting work for the marinas continues to progress and remains on track and as has always been the schedule, Gross said. Increased maintenance and capital improvements have already begun in the marinas with the major marina work scheduled to start about one year after the start of work on the shops and restaurants.

Nearly every corner of the harbor is in need of renovation and upgrades, said James Lenthall, vice president of Dana Point Boaters Association (DPBA).

“Our docks are in especially poor condition, despite the marinas’ admirable efforts to keep them in shape. Docks are uneven, pilings are loose and leaning, concrete is crumbling, wood is rotting, power is unreliable.”

The docks, which are in need of new dock boxes, lights, utilities, gates and security, are set to be funded with an allocated $500,000 by the Harbor Revitalization Plan, for upgrading and related infrastructure. The amount allocated will increase to at least $1 million annually starting 2015 and will continue until the renovation is complete. 2015 will also see a dredging project estimated to cost $3 million out of the budgeted revitalization.

While harbor improvements will benefit several boaters are concerned they will be negatively impacted by many elements of the project, specifically the boat barn and the reduction in boater parking.

“The shops and restaurants want – and need – more space and more parking,” Lenthall said. “Boaters don’t want to relinquish their parking, which is a hot commodity for everyone on summer weekends and holidays.”

While there will be an overall net gain in parking spaces, those will be mostly dedicated to shops and restaurants and current construction plans call for new buildings where dedicated boater parking is now.

The phasing of the Revitalization Plan calls for the shops and restaurants and landside amenities to be replaced first, which naturally causes alarm among boaters that there may not be sufficient remaining funds to complete the waterside improvements, Lenthall noted.

DPBA’s job is to closely monitor all phases of the project, to ensure that an effective and fair financing plan is in place prior to start of construction, and ensure that boater amenities are fully funded and remain on schedule, Lenthall explained.

“OC Dana Point Harbor assures us that this will be the case, but that doesn’t mean we won’t be in their back pocket the entire way,” he added.

The dry dock storage plan, also known as the boat barn will hold approximately 400 small boats in vertical racks, delivered to and from the water by an automated gantry crane system.

“The problem is, it won’t accommodate trailers, and will almost certainly result in higher storage fees,” Lenthall said. “Tenants of the existing Embarcadero dry boat storage facility have made their position very clear: they don’t want to relinquish their trailers, or the ability to easily access and work on their boats, which can’t happen in a vertical storage facility. And at an expected cost of $30 million, we believe this is a disproportional expense to store 400 boats, compared to the extensive dock improvements so sorely needed for the 2,400 boats on the water.”

Another problem lies in figuring out where the remaining 280 vessels go. “Brad just did a study to prove there was only 516 boats there when there’s really 680,” said Bruce Heyman, president of Boaters for Dana Point Harbor. “If you took all of the dry boat storage areas that exist in the harbor in planning area one and two, there were about 680 boats there.”

“In my view it was by gaming the system; the shipyard used to have an acre of land it used to provide dry boat storage for about 90 vessels,” Heyman said. “The county took it away from the shipyard and [the acre] is now lined with parking spaces for cars, usually for Catalina Express customers.”

Because there’s no legal permission to have had boat stored at the shipyard, the city didn’t have to count those boats, he noted.
Since 2009, 300 boats have been located on a temporary storage site at South Coast Water District property, forcing boaters who had previously been located at the harbor to tow their vessels via trailer down to the waterfront.

“Because you only have to drive a few parking spaces over, it’s no big deal if your trailer has squeaky wheels or a light that doesn’t work, but now that it’ll be on the water district property everything will have to be street legal,” Heyman said.

Other expenses boaters are expected to bear will be the price for storing vessels in the boat barn, he said.

“I’ve done some calculating and it comes out to $222 a month with zero interest rate – that’s how much the boaters that go into that unit will have to pay a month to have the dry dock storage building and it doesn’t even cover operations or anything else,” Heyman said, comparing the upcoming fees with what boaters had previously paid – a total of $240 a month.

“They can find boaters to fill it but it’s going to be upper class tenants, not the boaters who have historically afforded boating in Dana Point Harbor,” he said.

Redondo Beach
CentrelCal, a development company in the city of Redondo Beach, is currently pursuing an extensive Environmental Impact Report (EIR) for a $300 million revitalization project for the city’s waterfront.

Plans include the opening of Seaside Lagoon, a new boat ramp, a 54-bedroom sustainable hotel on Harbor Drive, bike trails, the Redondo Landing and improvements to pier common areas.

“We’re in the process of pursuing the EIR; we’re still in the beginning of the process,” said Rupesh Bhakta, CenterCal’s director of acquisitions. “We’re submitting plans for review, but there’s likely to be modifications.”

The developer, which hopes to bring a movie theater, boutique hotel and new restaurants and shops to the 15-acre waterfront, estimates the application process to take between 16 and 18 months.

“The project is probably two years off; we’re just starting a public process to map that out now,” said Pete Carmichael, Waterfront and Economic Development director.

The boat ramp will be located on mole C, a location that is currently occupied by Joe’s Crab Shack. “We’re in talks with them about relocating to the core of the project, on the Redondo Beach Marina leasehold,” Carmichael said. The leasehold, which is currently home to a large surface parking lot, will become the center of the city’s facelift, making way for restaurants, shops and the proposed 54-room hotel.

On land, CenterCal also plans to put in a promenade and public walkway that will connect to the harbor. A cycle track – a two way lane separated from vehicle traffic by a landscaped median, will be placed along Harbor Drive.

Seaside Lagoon, which was once used as an outflow source for ocean water heated by power plant cooling procedures, is soon to transform into a public beach.

“Seaside Lagoon, which was built in the 60s, is really a unique asset,” Carmichael said. “Power plants by regulation have to go away from ocean water cooling techniques by 2020. So, we’ll poke a hole into the breakwall and it will become a beach where people can kayak and swim.”

A dock may also be added for the purpose of kayaking and paddle boarding. The city is currently seeking grant funding for modifications to the lagoon as well as for the boat ramp.

The city will also add a series of 26 transient vessel (two point) moorings to accommodate boats from 25 to 50 feet in length, just inside the break wall. The project, which is grant funded will be completed by June of this year.