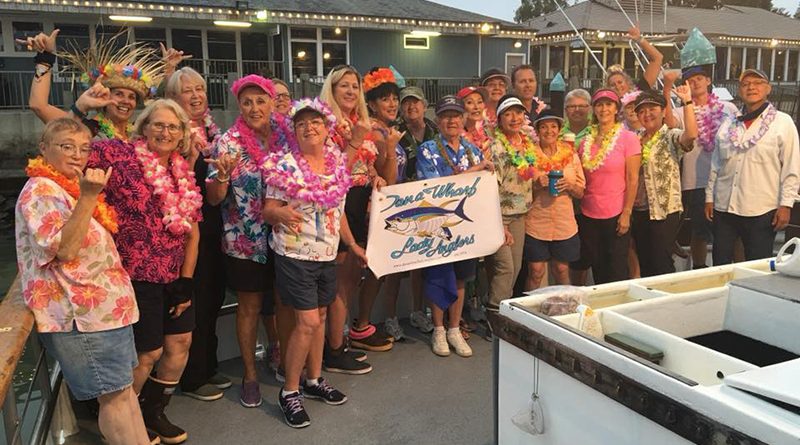 DANA POINT一 Dana Wharf’s Lady Anglers celebrated 45 years in 2021 and will host their annual banquet commemorating the event in February of this year.

The Lady Anglers are an all-female fishing club out of Dana Point that love the sea and the sport of fishing. The group was created in 1976 as an offshoot of another club in Newport Beach.

A group of ladies in the Newport club approached Don Hansen and told him they wanted to form a women’s fishing club in Dana Point, and with the help of Hansen, created the Dana Wharf Lady Anglers.

Hansen passed away in January of this year and was considered a great influence on the fishing community in Dana Point.

“We were considered Don Hansen’s Lady Anglers,” said President Sandy Estep. “…That is 45 years of fishing as the Dana Wharf Lady Anglers.”

The club sets 12 to 13 fishing charters for women a year and hosts seminars for knot tying and casting off, which serve as a brush-up lesson for seasoned anglers and an introduction to the sport for women who are just starting the hobby.

Events can be half-day or multi-day trips. There are several themed events, including a Cinco de Mayo trip where the club serves Mexican food for the day and a champagne trip with bottles of bubbly and appetizers for participants.

In addition, there are multiple opportunities for new women to get in there and receive hands-on instructions.

The Lady Anglers have a support system for women just starting out and a consistent place to fish for those women that grew up with a rod in hand.

“We have a support system of women that mentor,” said Estep. “If somebody is going to come out for their first time, we bring several different types of rods and reels for them to try to see what they are more comfortable with.”

Estep grew up right here in Southern California fishing with her dad. She joined the group after meeting a few members who invited her to try a multi-day albacore trip out of San Diego. Estep said she fell in love with the club, and that was it; she was hooked.

For anglers interested in competing, the club has a point system for California species where women can win prizes based on weight, species, and equipment.

Women can submit forms for fish caught anywhere between Point Conception and the Mexican border. For example, a rockfish will garner two points with a 15 fish limit for the year, and white sea bass caught on a 12-pound test line will garner eight points.

Points are tallied, and awards are passed out at the yearly banquet. In addition, women can take home special pins for species caught, and a special trophy is awarded to those who catch all their fish out of Dana Wharf or on Dana Wharf charters.

The group also works with Scripps, visiting the institute yearly, and some of the members work with Scripps to tag and release white sea bass at the Channel Islands.

To join the Lady Anglers, there is an application and waiver. Participants must be over 18-years-old and identify as a woman; there is a $20 initiation fee and a $30 yearly membership fee.

To remain in good standing, members are asked to participate in a minimum of two fishing charters a year and at least two functions, such as seminars or the upcoming banquet, which is a good opportunity for anglers to get out of their fishing gear and dress to the nines to celebrate with friends.

“All we want are people that have positive attitudes, a love of the sea, and want comradery,” said Estep. “We do have a lot of fun. People who join the club make lifelong friends, and that is in a nutshell what we are all about.”