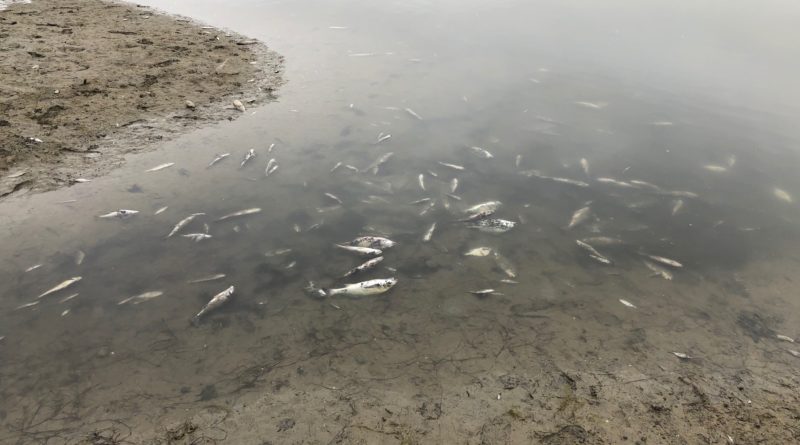 Scientists say the recent red tide event was unique in its visibility and length and is now causing dead fish to appear in harbors, bays and lagoons as the bloom degrades.

REDONDO BEACH—The large red algae bloom spanning from Los Angeles to Baja that tinted coastal waters a rusty brown and turned waves neon by night, is now starting to degrade and is causing fish die offs in some places.

In mid-May, dead fish were reported in Redondo Beach’s King Harbor, lagoons in San Diego County and around the Baja coast.

“We don’t have a way to monitor that extensively at every beach so we’re kind of relying on people to send us reports,” said Clarissa Anderson, the Executive Director of Southern California Coastal Ocean Observing System or SCCOOS. “It’s not going to be a continuous stream all the way down; it’s going to be patchy.”

Also known as a red tide, a bloom occurs when a particular species of phytoplankton begin reproducing rapidly, resulting in millions of cells in each gallon of water.

While red tides are not unusual in Southern California, particularly in early spring and later summer, not all phytoplankton species produce visible blooms such as this. SCCOOS said what was unique about the recent event was the incredibly high biomass that led to a very intense red/brown water during the day and the bioluminescence at night for weeks on end.

SCCOOS said most red tides in California only last one or two weeks, while this event has lasted upwards of two months. SCCOOS first captured images of the early stages of a spring phytoplankton bloom from a robotic microscope deployed on a mooring on the continental shelf offshore of Del Mar in late March. The bright neon waves persisted near Scripps Pier and some other areas through much of May.

“There’s a lot of things to consider from the phytoplankton ecology side to the physics to the fact that we had a 400 percent above normal precipitation in the weeks leading up and going into it, we had a lot of upwelling, there’s just so many things that happened,” Anderson said.

Oxygen can become depleted in the water as the bloom decays, which can lead to the death of fish and invertebrates, which has been the case with the recent bloom. Light penetration into the water can also be reduced by more than 95 percent, affecting kelp growth, reproduction, and recruitment.

“The fact that it got so big and went on for so long, when it started to degraded, that was the perfect storm for the oxygen to get drawn down to really low levels and kill fish and particularly the critters that can’t get away,” Anderson said.

SCCOOS said this effect is amplified in semi-enclosed areas such as harbors, bays and lagoons. With little exchange with the ocean and reduced mixing with the atmosphere, those areas experience even lower oxygen.

SCCOOS/SIO said researchers will be analyzing samples to try to better understand the causes and variability of the die-offs, including investigating the possibility of toxins.

“We saw some of the animals in aquariums dying even when oxygen was being added back into the water and so that made us think maybe we are starting to see a situation with the toxin we are familiar with,” Anderson said.

SCCOOS said while a L. Polyedra blooms are usually benign, scientists in Ensenada, Baja are detecting yessotoxin in recent samples, indicating that the same may be occurring in Southern California.

SCCOOS also said this type of bloom is generally not a public health concern. However, there have been anecdotal reports in previous years from surfers and beach-goers claiming respiratory irritation from sea spray emerging near red tide water.

“This one is not known to be a public health threat however we’re getting a lot of reports about surfers now having some respiratory and other distress, getting rashes, so we’re looking into that,” Anderson said.