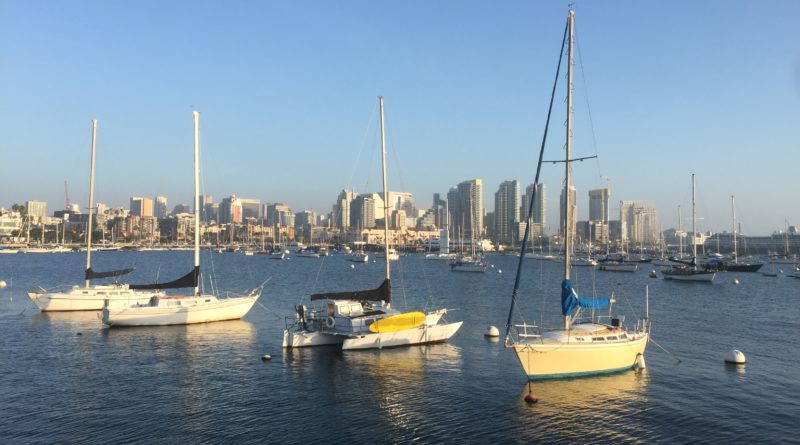 SAN DIEGO — A developer tabbed with renovating a valuable stretch of Downtown San Diego waterfront property revealed several changes must be made to the project.

Seaport Village, which would bring several visitor-serving amenities to the San Diego waterfront, will look quite different from original plans, Gafcon Inc.’s Yehudi Gaffen told the Port of San Diego’s Board of Port Commissioners, March 13.

The port district selected Gafcon Inc. to pursue a major redevelopment of the Seaport Village area in 2016; the development firm created 1HWY1 to oversee the development. Original plans called for a Space Needle-like structure – called “The Spire” – to dominate the San Diego skyline.

Gaffen, speaking in front of commissioners during their March meeting, said changes had to be made to plans originally submitted to the port district after an earthquake fault was found running under the planned hotel site and various utility easements was discovered elsewhere on the development site.

The portion of the development site above the earthquake site could instead be used as an open public space, according to Gaffen. He added state law prevents him – or any developer – from building atop an earthquake fault.

There was also a plan to purchase the “Headquarters” center; however, the acquisition was not completed, causing the developer to make even more changes to the original plan. The updated plan would also relocate the aquarium to a new location on the site and make other tweaks to project elements.

Overall the new Shoreline Village would feature a reduced retail element (277,712 square feet, down from 388,625 square feet) and additional space for boating (200 slips, up from 164).

Marine-oriented office space would have almost 145,000 square feet of dedicated space under updated plans, up from 19,130 square feet.

“We have found a need for blue tech and blue economy office uses,” Gaffen told commissioners. “[We] feel there will be more than enough use for the 144,000 [square] feet.”

Wayne Raffesberger, a former land-use attorney and urban planning professor, said the 1HWY1 proposal is “one of the worst projects” he’s ever seen.

“I can safely say this is one of the worst projects I’ve ever seen. It is a mishmash of ideas and concepts, some merely unnecessary, some bad and others, frankly, atrocious,” Raffesberger told commissioners. “Why do we need an aquarium on the waterfront when we have the Birch Aquarium and Sea World within just a few miles of this site? Why do we need an artificial beach when we have real beaches within miles of this site.”

He described The Spire as a “mushroom on steroids” and would open the door for San Diego to be referred to as “Seattle Junior.”

A representative from the Grand Manchester Hyatt, which is adjacent to the Seaport Village property, also expressed opposition to 1HWY1’s changed plans, saying view corridors would be blocked and the project’s density is too large. The representative asked commissioners to send plans back to the developer.

The blocking of Hyatt’s bay view can be attributed to 1HWY1 moving its planned hotel off the earthquake fault and to its new location (adjacent to a hostel), a situation Commissioner Marshal Merrifield said he could not support.

The San Diego Chamber of Commerce and Downtown San Diego Partnership, conversely, hailed the 1HWY1 project as a win for the city.

Downtown San Diego Partnership’s Daniel Reeves challenged some of Raffesberger’s contentions, stating the city’s commercial core actually does have a need for an urban beach.

“As a downtowner myself, I can express the need for a beach in our downtown area,” Reeves told commissioners. “An urban beach would be, quite frankly, one of the best things to happen to downtown, from both a visitor and resident perspective.”

Others stated the Seaport Village redevelopment would, once completed, make San Diego a world-class destination.

Malcolm also said 1HWY1 – and any other waterfront developer, for that matter – should think about and plan for increased boater access.

“We need to start thinking about [water mobility] in our planning,” Malcolm said. “Much like the Brigantine, there is going to be a requirement … to have areas where people can park their boat. Maybe it’s a parking spot with a meter. I understand docks aren’t free, they’re expensive, but places where you can park boats.”

Gaffen, in reply, stated his company is looking into various models of how to provide ferries, water taxis and boat parking.

Commissioner Michael Zucchet, meanwhile, acknowledged 1HWY and port district staff for providing an update on the Seaport Village p1roject, stating changes to redevelopments such as this one often evolve over time.

“There’s nothing particularly surprising about an evolution in a project like this, and, generally speaking, it’s a good thing,” Zucchet said, stating changes are to be expected as developers conduct due diligence.

Zucchet also asked if 1HWY1 and the Grand Manchester Hyatt could work together and find some sort of middle ground solution.