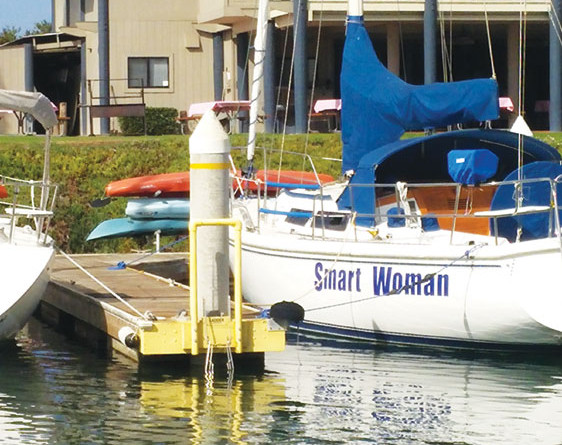 SANTA BARBARA — A meeting at Santa Barbara Yacht Club to update members on work being done at a local marina spawned a Harbor Commission discussion on whether the city needs to install dock ladders in the harbor.

Resident and local boater Stephen K. Lemon wrote a letter to commissioners in August urging city officials to install dock ladders in the harbor as a safety precaution. Lemon wrote the letter to the Harbor Commission after a representative from Bellingham Marine Industries spoke about dock ladders at a Santa Barbara YC luncheon.

The representative spoke to yacht club members about its current project with the city to replace Fingers A through P at Marina 1.

Lemon said he believed the installation of dock ladders in Santa Barbara Harbor was a matter of common sense.

“If someone were to fall from the dock walkway into the water in the average marina, it would be very difficult to get out of the water to safety,” Lemon wrote. “The vast majority of marinas has recognized this fact and has provided well marked emergency use ladders in case such accident should occur. Interestingly, no such emergency ladders have been provided in Santa Barbara.”

City staff and commissioners discussed Lemon’s letter at the Sept. 17 Harbor Commission meeting, acknowledging people have, albeit infrequently, fallen into the water.

“They’re installed to help people get out of the water if they fall in; some are used when it’s encouraged to go in the water,” Waterfront Facilities Manager Karl Treiberg said.

Whether enough people accidentally fall into the water to justify the costs associated with building and maintaining a dock ladder has not yet been determined.

“Periodically there is a report of someone falling in the water at one of Santa Barbara Harbor’s four marinas. Most people manage to get out of the water by a variety of means (climb out, use a stern ladder on a nearby boat, or with the assistance of someone) although there have been a few drownings over the years,” city staff said. “Reports of people falling in are very infrequent (a few times a year) but not all incidents are reported and therefore it’s difficult to determine exactly how often this happens.”

Installing dock ladders could prove costly. Ventura Yacht Club installed one dock ladder for every fourth boat in 2010 at $180 each.

The exact cost would be determined once city staff decides where to place each dock ladder and how each would be designed.

A staff report to commissioners stated people have fallen into Santa Barbara Harbor in the past and dock ladders would be a “desirable safety feature,” even though the mechanism has greater value at marinas with cold water temperatures.

“In general, dock ladders appear to be more common in northern climates where water temperatures are very cold and the risk of hypothermia and drowning are much greater than in southern California,” city staff stated in a report to the commission.

Both Treiberg and city staff explained the city goes through a four-prong process to determine whether to install a safety feature at a public venue.

“Considering the close proximity of the boating public to the water in most marinas constructed with floating docks, there is some inherent danger/risk associated with falling in. Marina managers consider the public’s obligation to use due care in using public facilities, the test of time, liability, and cost among other things,” city staff’s report to commissioners stated. “Marina managers expect the boating public to be aware of the risk of falling in the water and use due care at their facilities.”

Commissioners did not take any action at the Sept. 17 meeting.